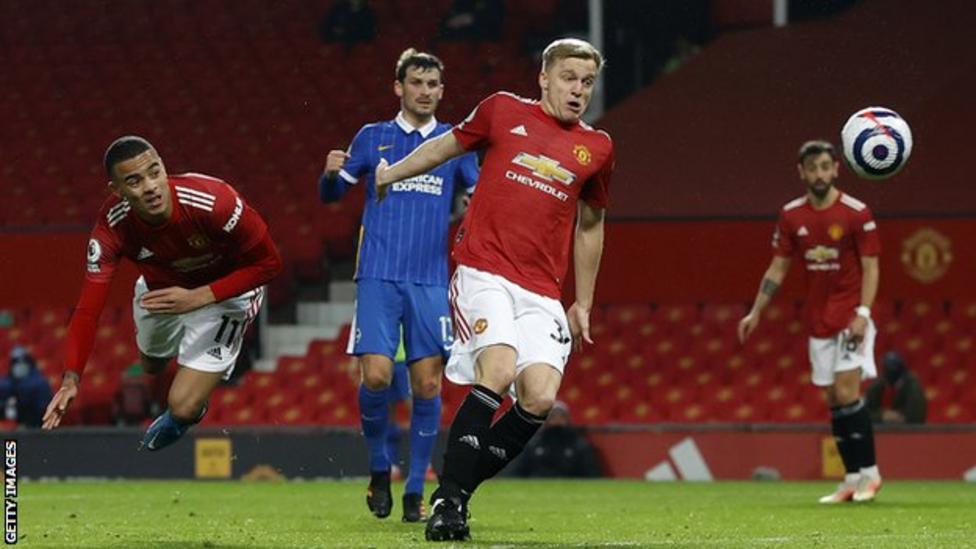 A late Mason Greenwood winner sealed United's come-from-behind victory and earned the Reds breathing space in the fight for the top four.

As the Reds resumed domestic duties after the international break, Brighton looked on course for their first ever Old Trafford victory in an impressive first half, defending heroically and threatening on the break after former Red Danny Welbeck had nodded the Seagulls ahead in the first half.

Marcus Rashford swept home the leveller before Greenwood pounced from Pogba's miskick into the turf to head home seven minutes from the end and open up a four-point gap to third placed Leicester City.
The result left Graham Potter's eye-catching visitors six points above the drop zone, but their performance showed more than enough grit, resilience and occasional quality to suggest they are a team well equipped to finish comfortably clear of the relegation places.

With Martial's absence, Rashford carrying an injury and Cavani out of form, Greenwood may have to carry the burden of United's attacking intent as the season enters its final run in. The 19-year-old was a constant threat to Brighton, pulling the strings from the right as he came closest to opening the scoring early on.

Greenwood raced through and fired off a post in the tenth minute but, three minutes later, the south coast side took the lead. On their 14th visit to Old Trafford, it was with a sense of inevitability that Welbeck - so often the scourge of his former side - scored his fourth goal against us since leaving the club in 2014.
Dean Henderson saved superbly from the striker's header after Neal Maupay had picked him out, but there was nothing the Reds stopper could do on the rebound as the ball sat up for Welbeck to apply a simple finish at the Stretford End.

Henderson had to be at his best again moments later as Brighton captain Lewis Dunk thumped a header goalwards, only for the keeper to brilliantly tip the ball onto the bar and away to safety.

Paul Pogba thumped a shot wide from distance but Brighton continued to carry the greater threat with United thankful for Harry Maguire's lunging challenge on Maupay with the Albion striker poised to shoot.

The Reds were under the cosh and survived a flurry of corners at the end of a half in which Solskjaer's men failed to muster a shot on target as a resilient and well organised Brighton side got through to the break in comfort.

The obdurate Seagulls continued to frustrate the Reds as Robert Sanchez saved at the feet of Bruno Fernandes after good work from Pogba. Fernandes fired wide but Brighton failed to heed those warning as a much improved United team levelled the tie shortly after the hour mark.
After a sweeping move down the left, the ball found its way to United's Portuguese string-puller. Fernandes was cynically clattered by Joel Veltman as he stabbed into the path of Rashford and United's no.10 drilled the ball across Sanchez and in to the corner for his 19th goal of the campaign.

Maupay and Welbeck had combined to deadly effect for the Albion opener and almost undid the Reds again as the former found the latter and he went down under a challenge from Maguire. Replays showed United perhaps got away with one, but maybe the Reds skipper had done just enough as VAR ruled there was no offence and the hosts survived.

Sanchez saved well from Fernandes and the impressive Greenwood went close again as he fired over the bar having been picked out by substitute Dan James.

A United winner now seemed only a matter of time and it finally arrived on 83 minutes as Brighton's stern rearguard action finally caved in. Fernandes was again involved as he clipped the ball to Pogba at the back post, and the Frenchman's tame mishit drove his shot into the turf. The ball bounced up nicely into the path of Greenwood and he stooped to nod home his first headed senior goal, despite the desperate attempts of Ben White on the line.

Now forced into a different mindset, Brighton poured forward in search of an equaliser that, in truth, they probably deserved. There was to be no late twist in the tale, though, as United held out for a precious victory that almost makes certain of Champions League qualification.