Edinson Cavani welcomed the return of fans to Old Trafford with a 40 yard stunner before Joe Bryan headed a late equaliser for already relegated Fulham.
But despite the lowly visitors comeback, Chelsea's defeat of Leicester City in the late kick off ensured Ole Gunnar Solskjaer's side are now certain of a runners up finish in the Premier League with one game to spare. 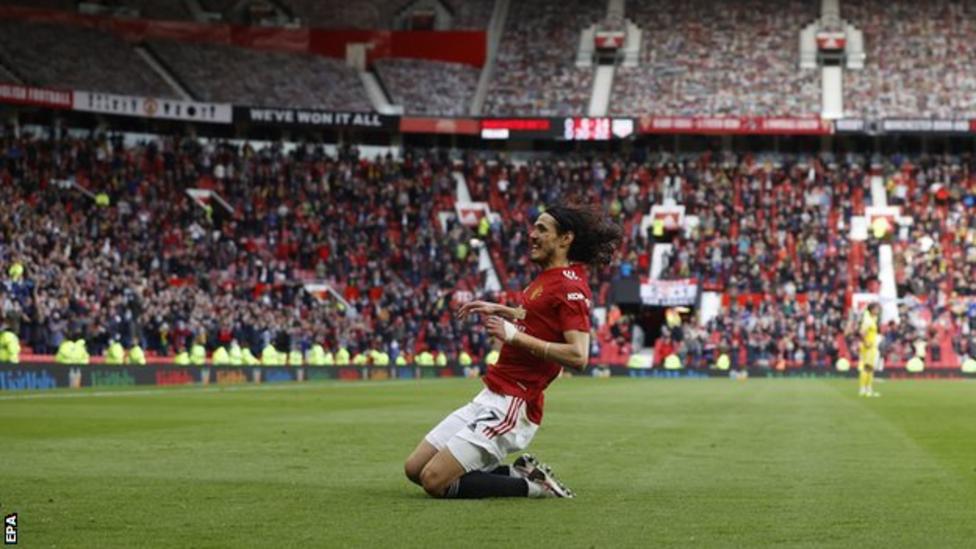 For the first time in 14 months and over 400 days, Old Trafford opened its doors as 10,000 spectators returned to the stadium for United's final home game of a breakneck campaign. Solskjaer made three changes as David de Gea, Axel Tuanzebe and Mason Greenwood came in for Dean Henderson, Eric Bailly and Marcus Rashford in an XI that won't be far off the one selected in Gdansk for next week's European final.
Paul Pogba headed over the bar and Cavani then had a penalty appeal waved away when he was pulled down in the box, but referee Lee Mason remained unmoved.
The veteran Uruguayan had spoken of his desire to play in front of fans as the main reason for extending his contract, and he gave the Stretford End a moment to savour with a world class opener in the 15th minute to ultimately get his wish.

De Gea punted the ball long to find Bruno Fernandes and he flicked the ball on with a deft touch into the path of Cavani, coming back from an offside position. On halfway with only the goalkeeper to beat, Old Trafford erupted as the striker sent a stunning, sumptuous lob over the backpedalling Alphonse Areola from fully 40 yards to put the Reds in front - his sixteenth of the season and an 18th assist of the campaign for newly crowned Sir Matt Busby Player of the Year Fernandes.
Mason Greenwood headed over and Fernandes tested Areola from distance but Fulham - despite their lowly status - carried an intermittent threat at the other end. Fabio Carvalho was snuffed out by Fred but the 18-year-old caused problems with his pace and went close on the half hour mark when he gave Victor Lindelof the slip and fired on goal, but De Gea was equal to the teenager's effort.
Fernandes was denied by Areola and Luke Shaw - the club's Players' Player of the Year - skied his shot high and wide in the final action of a first half in which United dominated.
The pattern of the game continued after the interval with string-puller in chief Fernandes the main instigator of everything United did. Areola saved well to keep out the Portuguese playmaker's curling free-kick and the same player flashed another shot wide from distance as, despite their superiority, the lack of a Reds killer edge saw Scott Parker's strugglers gain in confidence.
The capital club served notice of their intent on the hour mark when a superb double save from De Gea kept United's lead intact. First, he got a hand to Ademola Lookman's attempt at the near post before the Spaniard clawed away Carvalho's header on the rebound from point blank range. Fernandes had another set-piece held by Areola after intricate trickery from substitute Marcus Rashford and Greenwood fired over soon afterwards having been put through by Cavani.

The Reds were ultimately made to pay for their profligacy and were pegged back as the Cottagers struck at the Stretford End with 15 minutes to play. Bobby De Cordova - Reid picked out the onrushing Bryan at the back post and he nodded home beyond De Gea as VAR allowed the goal to stand following a lengthy VAR check.
Cavani headed wide and Mario Lemina blocked from Fred as Solskjaer threw on Amad and Donny van de Beek, but the Reds were unable to carve out a trademark late winner in front of the Old Trafford faithful.
United's status as definite runners up was later confirmed when Chelsea beat Leicester - the only team whom could have caught us - at Stamford Bridge to move into third.