Liverpool claimed victory in the hastily re-arranged fixture to strengthen their top four chances with a Roberto Firmino double.
Bruno Fernandes' 28th goal of the season had given Ole Gunnar Solskjaer's Reds an early advantage but a madcap spell either side of the interval put Jurgen Klopp's side in control. Diogo Jota equalised before Firmino's double, only for Marcus Rashford to give the hosts hope. It briefly looked as if the Reds might nick an ultimately undeserved point only for Mo

Salah to seal the result for the men from Merseyside at the death, Jurgen Klopp's first win at Old Trafford since he took charge at Anfield.

For United, despite the fact we had little to play for in stark contrast to the visitors own ambitions, it will go down as a bad night at the office for Solskjaer and his men.
Klopp's side, though, climb to fifth - four points behind place above Chelsea with a game in hand in an increasingly congested battle for the final Champions League qualification position.
Having seen his heavily rotated side go down to another side in the mix for the top four, Leicester, 50 hours earlier, it always seemed likely that Solskjaer would restore his key men for Liverpool's visit to M16 and so it proved. Eric Bailly was the only survivor from the defeat to the Foxes, with Edinson Cavani, Bruno Fernandes, Luke Shaw, Rashford, Dean Henderson and Aaron Wan - Bissaka amongst those to earn a recall.

There were once again protests outside Old Trafford before English football's marquee fixture, but this time, unlike the initial game scheduled for a week ago, the tie was able to go ahead without incident or disruption.
As expected between the country's biggest clubs, the tie started at breakneck speed and both sides went close early on. Firmino shaped to shoot but instead whipped in a cross only for Bailly to block with a brilliant recovery challenge and despite shouts for a possible handball, there was no cause for alarm.

Then came a catalogue of errors from two men in excellent recent form. Liverpool keeper Alisson miskicked straight to Cavani - a man with eight goals in as many games - but his mistake was just as surprising as he fired off target with the goal gaping. Perhaps an early indication that this was not to be our night.

Despite that miss, United continued on the front foot and went ahead soon afterwards, albeit in slightly fortuitous fashion.
Wan - Bissaka cut the ball back for Fernandes and the Portuguese playmaker's curled, outside-of-the-foot cross was met inadvertently by centre-back Nat Phillips whom could only divert it beyond his own keeper. Replays showed the ball was going in anyway and so the goal was officially credited to Fernandes.

Manchester-based referee Anthony Taylor was soon in the thick of the action when he awarded a penalty to Liverpool when Bailly was adjudged to have brought down Phillips. But VAR intervened and the official was forced to overturn his decision after the video technology correctly and clearly showed the Ivorian had won, and played, the ball.

Dean Henderson saved well from the dangerous Jota but United failed to heed that warning and were pegged back from the resultant set-piece as we failed to clear a Phillips shot and the ball fell to the Portuguese forward to flick home the leveller shortly after the half hour.

Paul Pogba fired into the side netting and Cavani saw a half chance go begging, but Liverpool had turned the tables by the break, a trait United themselves had become accustomed to.

Another set-piece proved our undoing as Trent Alexander Arnold's whipped free-kick fell to Firmino and the back post and the Brazilian striker outjumped the attentions of Pogba to head the visitors in front.

Liverpool now had the momentum and the half-time interval failed to redress the balance as Klopp's side continued to exert their authority. Two minutes after the restart, Firmino grabbed his second and his team's third as Henderson spilled Alexander - Arnold's shot from distance and Firmino gobbled up the loose ball to give the Scousers breathing space. 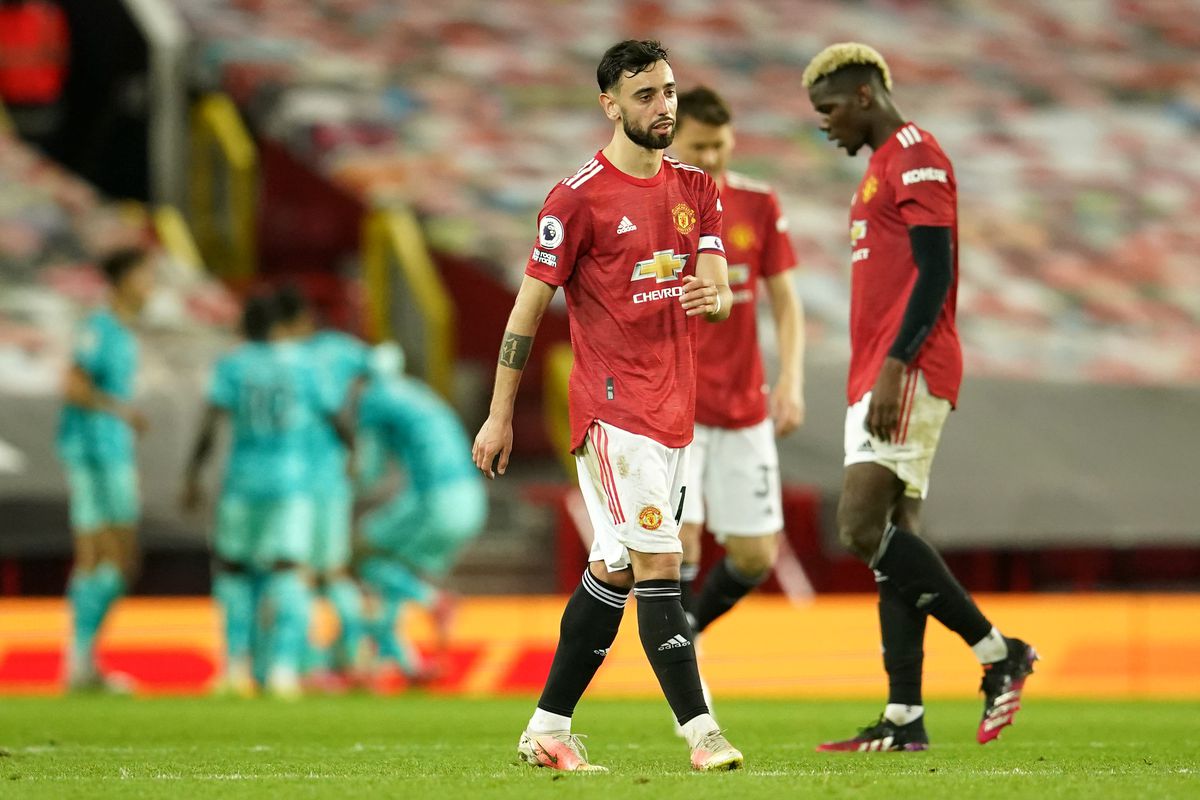 United were ragged and on the ropes now and only the upright prevented further damage as Fred lost possession to Thiago and he moved the ball on to Jota. The striker, playing ahead of Sadio Mane, burst into the area and fired goalwards from a tight angle only for the ball to thump a post and bounce clear. Henderson saved from the hat-trick hunting Firmino soon afterwards but then, out of nothing, United were back in the contest.

Shaw and Cavani linked superbly in United's best move of the game as the former found the latter and he in turn released Rashford to finish superbly under Alisson on 68 minutes. Having been on the back foot and almost dead and buried, United were suddenly the side with the momentum.

Another dramatic comeback seemed in the offing as substitute Mason Greenwood - on for Fred - had a shot cleared off the line and then saw his follow-up effort blocked from close range as Liverpool,  surprisingly rattled, suddenly came under siege. In a superbly see-sawing contest, Henderson saved from Salah and Mane flashed a shot wide before Cavani narrowly failed to turn home an excellent cross from the impactful Greenwood.

But just when the stage seemed set for a frantic, grandstand finish, Salah doused United's fire as a reverse ball from sub Curtis Jones released the Egyptian one-on-one with Henderson and he was never going to miss to roll in the fourth and clinch victory for the deposed champions.

This was an off night for United but the Reds have two games left and second place seems almost certain ahead of the visit of already relegated Fulham on Tuesday.