Today marks exactly three weeks since the ill-fated culmination of Manchester United's 2020-21 campaign.
You don't need me to embellish how it ended, but any thoughts of a breather, time out from the constant, wall to wall saturation of football day in day out were quickly eviscerated by the arrival of the delayed Euro 2020 - naturally of course, in these unique times, played out across the scorching hot summer twelve months on.

Yet the Euros - which co-incidentally holds absolutely zero interest for me - is barely a week old when the next Premier League season appears in our rear view mirrors. I don't know about you, but we all could do with no football for a bit - as much as I love it, it can become exhausting.

Thank goodness for cricket and tennis with a Lions rugby tour coming up as well - summer sports to watch that provide a breather from the onslaught of football everywhere.

The fixture list and schedule for the 2021-22 campaign dropped early on Wednesday, although the dates will, of course, be subject to change due to TV broadcasting rights. Fans eagerly awaited the details of their team's fate, with the new season set to kick off in its conventional August slot having got underway a month later last time out due to the knock on effect of the first Covid lockdown and the resultant Project Restart in June.

With fans having returned to stadiums for the final two match weeks of 2020-21, and with Britain seemingly emerging from the other side of the pandemic, there is an expectation the grounds will be full to capacity once again by the time the opening day on August 14 comes around - provided of course, there is no dramatic change in the circumstances once more. The latter stages of the Euros will see Wembley at 50% capacity - approx. 45,000 and the tennis at Wimbledon will have maximum capacity for the men's and women's singles finals - the first UK outdoor event to do so since the start of the pandemic.

Ole Gunnar Solskjaer's side begin their quest for a 21st top flight title at Old Trafford, playing our opener on the hallowed turf for the fifth successive year. The visitors need no introduction with Marcelo Bielsa's eye-catching if porous side the first opposition, with the 112th instalment of a fierce, storied, cross-Pennine feud a mouth-watering tie to kick things off. United thumped their Yorkshire counterparts 6-2 in the corresponding fixture last term and so will look to get off to a flyer as Leeds begin their second season back in the top tier.
The Reds always seem to travel south in the early weeks of a Premier League season and the trend continues again here, as United face Southampton at St Mary's on the 21st August before the always tricky trip to Wolves - under the tutelage of new boss Bruno Lage - a week later.

Newcastle and Aston Villa arrive at Old Trafford in the season's second month with a trip to capital to face David Moyes, Jesse Lingard and West Ham in between.
October and November look a daunting couple of months for the Reds as we face our fellow top six sides for the first time in 2021-22. Leicester City are first up on the 16th of that month, before our third visit to the Tottenham Hotspur Stadium - a tie sandwiched between the visit of Liverpool (October 23rd/24th) and the 186th Manchester derby. Pep Guardiola's champions make the short trip across the road to Old Trafford on the weekend of 6th/7th November. 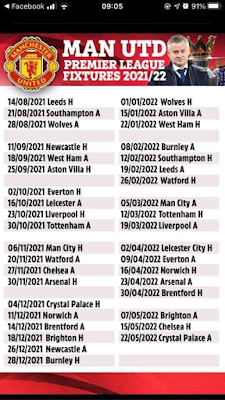 Things don't get any easier with European champions Chelsea and recent bogey side Arsenal in the crosshairs at the end of November, with the Reds to face the pair of London giants hot on the heels of another trip to newly promoted Watford.

Crystal Palace (another bogey team) complete the sequence of capital clashes to kick-start the traditional frantic festive months. December's opposition also include promoted pair Norwich and Brentford, Brighton, a trip to SJP and Newcastle on Boxing Day, and Burnley in a Lancashire derby in our final match of 2021.

If we thought October and November were tough, then March is brutal as we travel to the Etihad and Anfield either side of top six rivals Tottenham's trip to Old Trafford - a pivotal three weeks that looks to be make or break the entire complexion of United's season - any potential title challenge or otherwise.

April sees a mix of both the difficult (Leicester home, Everton away and Arsenal away) and the should-be routine (Norwich and Brentford at home) before we travel south again to Brighton in our penultimate away game of the season. United face Chelsea on the 15th May in Old Trafford's final tie of another campaign (with Solskjaer's Reds having long since secured the league, of course) and then we're on the road to Selhurst Park to finish 2021-22 a week later on the 22nd May.