In front of an Old Trafford crowd stunned into silence, ten years and a day since the 1-6 thumping at the hands of Manchester City, Jurgen Klopp's unbeaten Liverpool emphasised the gaping chasm between the two sides and their managers.
The visitors - in the 208th meeting between the Reds of Manchester and Merseyside - raced into a four-goal interval lead and added a fifth as Salah completed his hat-trick before substitute Paul Pogba was sent off for a reckless lunge on Naby Keita.

Solskjaer stuck with the side he sent out in Wednesday's dramatic win over Atalanta with Scott McTominay and Fred anchoring the midfield, Mason Greenwood on the right and Marcus Rashford on the left. Pogba and Jadon Sancho were named on the bench.

United started well and saw the game's first opening come our way inside the opening three minutes when McTominay worked the ball to Rashford and he in turn found the onrushing Bruno Fernandes. The Portuguese playmaker found himself one on one with Alisson but could only lift the ball over the bar from close range.

Seconds later and Klopp's Liverpool were ahead in the fifth minute when tormentor-in-chief Salah sliced United open to find Keita and he slotted his finish beyond David de Gea.

Eight minutes later it was 0-2 with a carbon copy of Atalanta's opener in midweek as Keita nicked the ball after England pair Luke Shaw and Harry Maguire got themselves in a tangle. He fed the overlapping Trent Alexander - Arnold to pick out the onrushing Diogo Jota - picked ahead of Sadio Mane - and the Portuguese striker steered the ball in at the back post.

De Gea denied Roberto Firmino and Alisson saved superbly from Greenwood at the other end, before Luke Shaw fired wide, Ronaldo went close and Rashford had a volley pawed away. To their credit, United's 19-minute spell brought about improvement and fuelled belief of another epic comeback like we saw in midweek but, with respect to Atalanta, they aren't Liverpool.

On the contrary in fact. United may have looked decent going forward but were wide open and all at sea at the back. Eight minutes before the break, the rampant visitors already put the result beyond doubt through that man Salah.

A fluid passing move saw Salah's blocked effort fall to Keita on the rebound and he in turn worked the ball back to the Egyptian to thump the ball high beyond De Gea.

Ronaldo and Fred were both yellow carded - with CR7 perhaps a little fortunate to stay on the field after he appeared to flick a leg at Keita in a coming together.
Salah added a fourth before the interval - his 14th of the season - when Jota found him in acres of space to sweep the ball beyond the helpless and stranded De Gea.

The half-time whistle was met by a chorus of boos greater in both number and volume from the smattering of discontent which greeted Wednesday's interval, after an insipid, chaotic and disorganised showing. 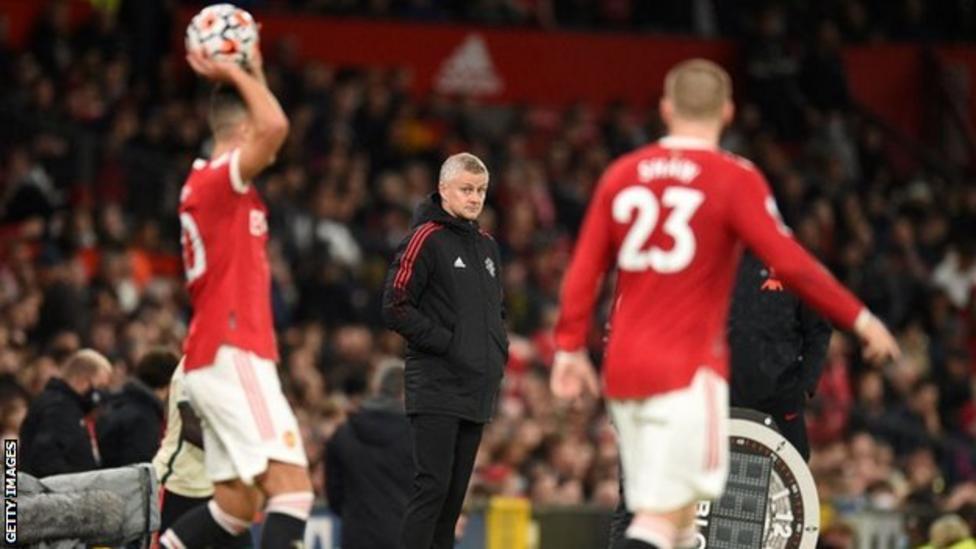 Pogba was introduced for Greenwood but quite what he was expected or supposed to do in such circumstances we will never know.
It was he whom made an immediate impact but not in the way hoped for when Liverpool captain Jordan Henderson dispossessed the Frenchman and curled the ball into the path of Salah to nudge beyond De Gea for his treble.

Ronaldo thought he had pulled a goal back but United's day was epitomised when VAR ruled the United man to be offside and his effort was chalked off. Things then went from bad to worse when substitute Pogba was sent off on the hour mark for a reckless, late foul on Keita.

The Liverpool man was taken off on a stretcher as Diogo Dalot and Edinson Cavani came on for the last hour with the Reds reverting to a back five in an attempt to limit the damage.

The Uruguayan hit the bar from a McTominay flick on but not even a consolation goal was forthcoming on one of Manchester United's darkest days.

Overall team performance: 0/10
United Faithful Man of the Match: Mason Greenwood. One of only two players - the other being De Gea - to emerge with any modicum of credit.