Andros Townsend cancelled out Anthony Martial's opener as United missed the chance to go top of the tabe amid further frustration at Old Trafford. For this third successive season, the fixture between the red half of Manchester and the blue half of Merseyside ends in a draw in M16.

Martial - a surprise inclusion in manager Ole Gunnar Solskjaer's XI - struck his first goal of the season with a well-taken effort shortly before the interval. But the under-strength Toffees, without Seamus Coleman, Richarlison and Dominic Calvert - Lewin, so often the scourge of the Reds, hit back.
Demarai Gray escaped the attentions of Fred and the otherwise excellent Aaron Wan - Bissaka to burst upfield and pick out Abdoulaye Doucoure whom in turn found the onrushing Townsend to fire in low beyond David de Gea.

Unlike on Wednesday, when Cristiano Ronaldo won it (very) late, the Reds to unable to find the decisive moment and so were forced to settle for a draw which, in truth, was probably a fair result.
Ronaldo was handed a watching brief from the bench with Edinson Cavani brought in for his first start of the season. Martial started on the left ahead of Jadon Sancho and Fred returned to anchor midfield as Paul Pogba dropped out - giving United probably the most glittering set of substitutes ever assembled.

Eyebrows may have been raised over the selection, but any doubts were quickly eviscerated as the Reds got off to a blistering, lightning quick start. Martial headed narrowly wide from an excellent Aaron Wan - Bissaka cross in the sixth minute, and Mason Greenwood flashed a shot across goal on the angle soon after.

Then came the clearest sight of goal on 21 minutes, with Everton and England no.1 Jordan Pickford called into action as Fred picked out Cavani with an excellent cross, but the Uruguayan's header was superbly pawed away by the stretching stopper.

Ex-Red Michael Keane went close at the other end, as he glanced a header wide from a Townsend set piece before De Gea denied the impressive Gray in an increasingly end-to-end encounter.

The breakthrough came two minutes half-time with a devastating finish from the much-maligned Martial at the culmination of an excellent sweeping move.
Scott McTominay, Wan - Bissaka, Greenwood and Bruno Fernandes were all involved as the latter found the Frenchman with a stunning ball and Martial did the rest to thump home a finish from 16 yards into the top corner.

Ronaldo and Sancho were summoned into action early in the second half but Everton were level on 65 minutes. Frustratingly, the goal came from our own corner as a Fernandes corner was cleared and the visitors raced upfield. With Raphael Varane on halfway and backpedalling, Luke Shaw's attempt to block the breakaway came to nothing as Gray and Doucoure stretched the defence as the former found the latter to find the advancing Townsend and he swept in a finish from close range. 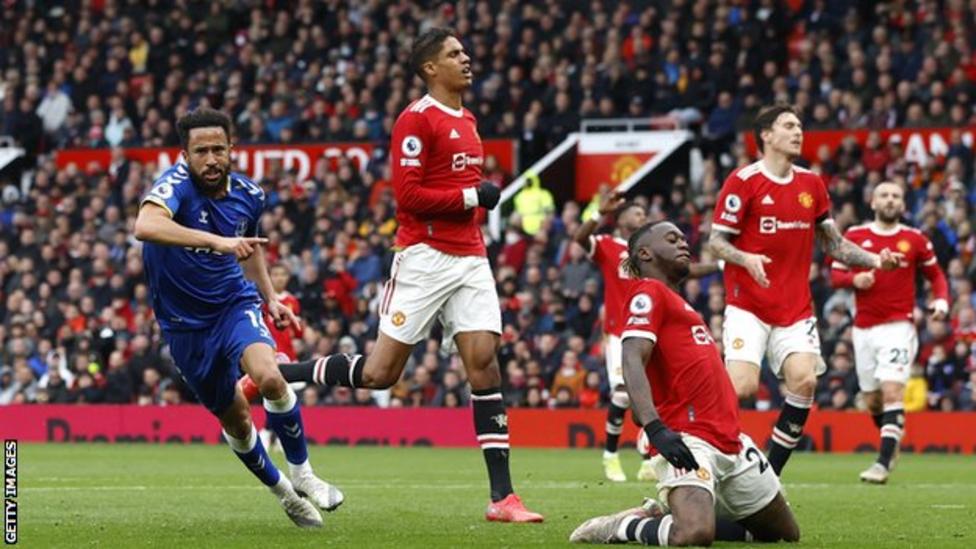 Ronaldo went close on the angle and fellow substitute Pogba went close twice in quick succession in a frantic finish. First, he curled a 25-yarder narrowly wide before he rose highest to meet another Fernandes corner only to send the header over the top when he perhaps should have done better.

Yet there was more drama. Everton thought they'd won it with United caught out by another counter-attack as substitute Tom Davies - for reasons only he will know - opted to pass to Mina instead of opting to shoot on goal himself. Mina was left with a simple tap in but his celebrations were muted with replays clearly showing the Colombian in an offside position - much to the relief of most of Old Trafford, what would surely have been the winner was correctly chalked off by VAR.

Sancho then could have won it for us in a frantic finish but could only fire tamely at compatriot Pickford having been set up by Ronaldo in added-on time. But there was to be no repeat of Wednesday night with a point apiece ultimately a fair result.

Overall team performance: 6/10
United Faithful Man of the Match: Bruno Fernandes. Excellent throughout and got an assist.