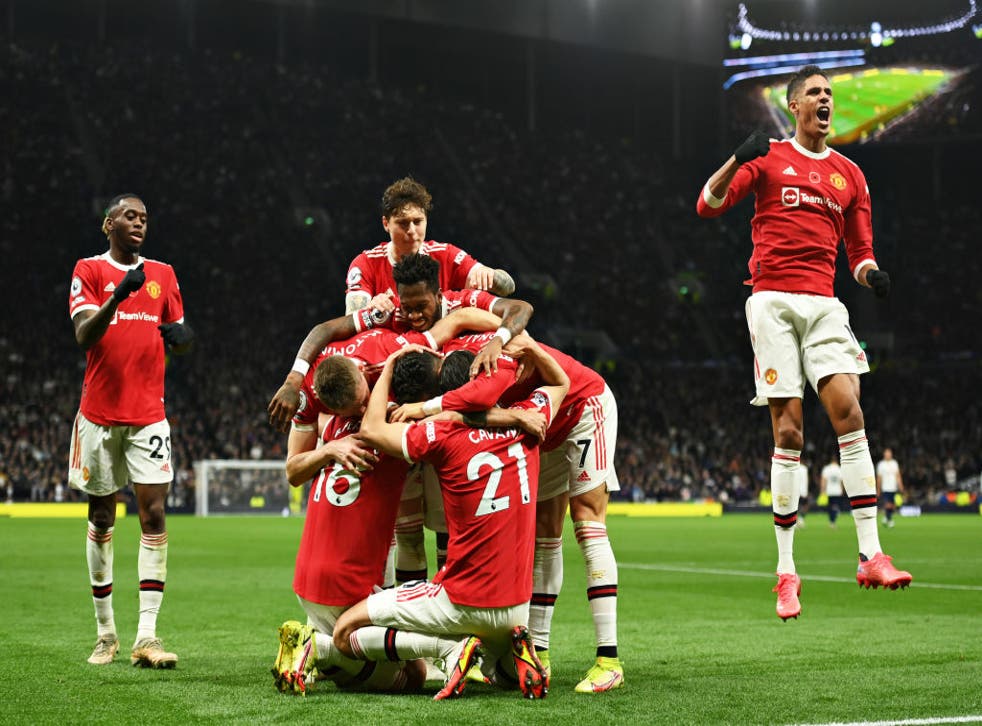 Ole Gunnar Solskjaer ended his "darkest week" with a hugely important victory over out-of-sorts Tottenham in the capital.

The United manager remains a man on the precipice but is safe - for now at least - after his Reds side ended a four game winless league streak with a simple but effective victory. The result moves United up to fifth and firmly amongst the chasing pack on a day when Manchester City lost and Liverpool were held by Brighton.

Surprisingly, considering the nature and manner of last weekend's loss to the latter, Solskjaer made only two changes to the XI for our first trip with fans present at Spurs' new ground. Raphael Varane returned to slot into a back three alongside Victor Lindelof and Harry Maguire, with Edinson Cavani handed only a second start of the season as he partnered Cristiano Ronaldo in a front two with an average age of 70. Mason Greenwood and Marcus Rashford, 24 today, were the players to miss out.

After an impeccably observed minute's silence ahead of Remembrance Day - this being Tottenham's closest home game to the day - Son Heung - min had the first opportunity when he cut inside and fired goalwards from distance. Fred blocked the shot but the resultant corner came to nothing as United cleared with ease.

Eric Dier cleared under pressure from Ronaldo after good work by right wing-back Aaron Wan - Bissaka before another Spurs chance at the other end. Luke Shaw and Maguire were both booked in quick succession, and Son then skied his effort from close range when he perhaps should have done better.

Nuno Espirito Santo's side looked to have made the breakthrough when they had the ball in the net on the half hour mark. Oliver Skipp flicked on a flag-kick and the ball founds it way through to centre-back Cristian Romero. He turned the ball home beyond David de Gea but the Argentine's celebration was cut short by the linesman correctly flagging for offside.

Hugo Lloris saved superbly from Fred's 25-yarder to deny the Brazilian a rare goal but the hosts failed to heed that warning and United led six minutes shy of the interval.
Luke Shaw's darting run down the left saw Spurs backpedalling as Fernandes collected the ball on the edge of the penalty area outside the box. Spotting his compatriot Ronaldo - who had superbly pulled off the shoulder of his marker - Bruno picked him out with an immaculate cross. Ronaldo met it with an even more immaculate strike, a stunning volley on the angle across Lloris and into the corner.

Son flashed an effort wide shortly after the restart before Ronaldo had a superb strike ruled out for another offside infringement.

Spurs huffed and puffed but were unable to find a way past United's disciplined, organised and well drilled defence with Varane in particular doing more than most to ensure we kept them at arm's length.

In truth, the Reds rarely looked threatened and put the result beyond any lingering doubt 25 minutes from the end when Fernandes dispossessed Skipp and found Ronaldo. He in turn slid the ball through to the advancing Cavani and he did the rest to lift the ball over Lloris and in for his first goal of the season.

Scott McTominay thwarted Harry Kane as the struggling England captain shaped to shoot, and substitute  Steven Bergwijn then fired wide as Spurs threatened to set up a barnstorming finish.

But nothing would deny the Reds a much needed clean sheet and late gloss was added to the scoreline as substitutes Nemanja Matic and Rashford combined. The former fed the latter to race through and slot low into the far corner to complete a good day at the office for Solskjaer's United.