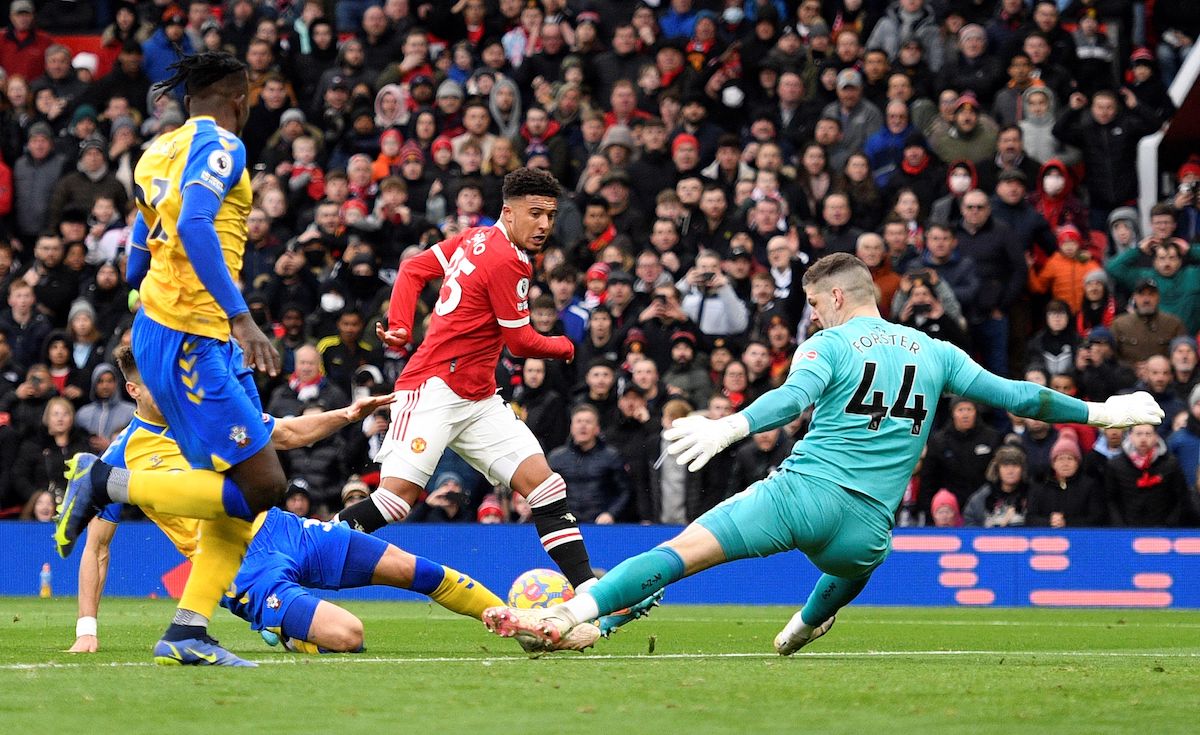 Che Adams cancelled out Jadon Sancho's opener as United had to settle for a third successive 1-1 draw against an impressive Southampton side.

It was groundhog day, a case of deja vu, with the tie almost an exact carbon copy of the midweek draw by the same scoreline at Lancashire neighbours Burnley - a bright start from the Reds before we faded away and allowed the opposition to seize control with an early second half goal.

From then on, Ralf Rangnick's side were unable to recover and in fact the south coast side - fresh off the back of a fine win at Tottenham - ended the game the stronger.
Despite an excellent opening half an hour and a superb Jadon Sancho goal, more points were lost in the increasingly congested battle for the Champions League positions. Harry Maguire came closest to a winner, but ultimately a draw was a fair result.

United made one change from the XI at Turf Moor as Cristiano Ronaldo returned up front in place of the unavailable Edinson Cavani and there were some frantic and frenetic opening exchanges. It took only six minutes for the first chance to come our way when Sancho released Ronaldo and he rounded the keeper, but his effort lacked pace and Romain Perraud was able to scurry back and mop up the danger.

Adams header was blocked to safety by Maguire before Sancho went close again at the other end only to this time be denied by the impressive Fraser Forster.
Sancho's early prominence stood out and it was he who put United ahead after 21 minutes at the culmination of a fine sweeping move. Bruno Fernandes sent Rashford away and he in turn cut the ball back for Sancho to turn home from close range - his first Premier League goal at Old Trafford.

Stuart Armstrong thumped just wide at the other end in response, and the same player then sent Red hearts fluttering when his acrobatic effort was superbly kept out by De Gea.
The Spaniard was tested again - this time through left-back Perraud - and the again impressive Paul Pogba then had the ball in the net only to be chalked out for offside.

United have struggled to hold on to leads and that familiar failing surfaced again almost immediately after the resumption. Burnley's equaliser had come in the 48th minute in the week and it was the same time on the clock when Adams popped up to punish United. Mohamed Elyounoussi played the ball inside and the Leicester-born Scot stayed onside to finish superbly off a post and beyond De Gea.

Nerves had crept in and United were unable were unable to regain the momentum, with Ralph Hassenhuttl's side showing all the hallmarks of a side intent on creating another notable scalp.
The Saints had lost 9-0 here last season but were a far cry from that meek surrender only a week on from the anniversary of that infamous mauling.

Armando Broja forced another save from De Gea on 55 minutes but the much-maligned Maguire then came within inches of restoring our lead when Luke Shaw's free-kick picked out the captain and his stabbed effort was hacked to safety by the busy, 50-year-old Forster.

That sparked a spell of pressure as Ronaldo went close with a half volley and Forster was called into action again as he repelled Diogo Dalot's well-struck effort from distance.

But back came Saints, again through Armstrong, whom fired over, and then the impressive Broja when he flashed across goal on the counter in the 67th minute.
United were thwarted again by the offside flag as Ronaldo's personal drought extended to a sixth game but Saints continued to pose a threat - namely through Broja in an eye-catching showing from the young Albanian.

Maguire had another chance to win it for the Reds deep into stoppage time, but once more Forster proved unbeatable as he clawed the skipper's header away to safety.