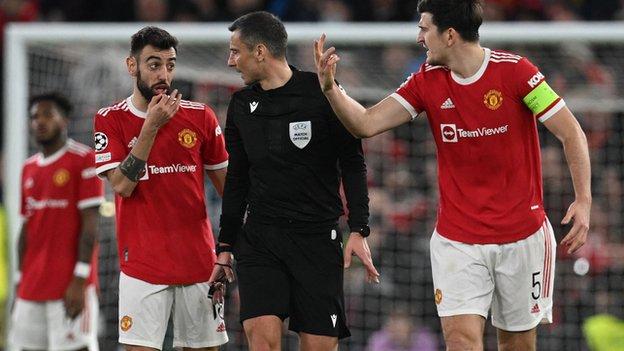 Manchester United were cheated out of a place in the Champions League quarter final by corrupt donkey Slavko Vincic at Old Trafford.
Renan Lodi's first half goal proved the difference but the Slovenian referee failed to spot two fouls in the build up the goal, with Anthony Elanga slammed to the turf and Fred almost decapitated by Hector Herrera before Lodi headed home. But of course the goal was allowed to stand and this official then did everything in his power to ensure the result remained because its all bollocks and a rigged stitch up.

He got in the way of two United attacks, stopped the game when Marcos Llorente went down with an ankle injury and then gave the visitors a free kick when Diogo Dalot got elbowed in the head.
He only booked two Atletico players despite their agricultural approach to the game, yet couldn't wait to pull the yellow card out for the slightest thing by our lads. Only four minutes were added on despite Atletico's time wasting, eight subs and at least two minutes for the shenanigans of stopping the game.

United genuinely have grounds to ask for an enquiry into corruption and match fixing here. It was the worst performance by a referee I have ever seen and that's saying something.

Interim manager Ralf Rangnick made three changes from Saturday's win over Spurs as Bruno Fernandes, Scott McTominay and Elanga came in for Paul Pogba, Nemanja Matic and Marcus Rashford.
Old Trafford was rocking and it galvanised United as we started strongly. Elanga headed over having been picked out by Dalot with the young Swede harshly penalised as the donkey set the tone for his horrific showing.

Elanga came close again after 13 minutes when he was found by Bruno Fernandes and fired on goal only for Atleti keeper Jan Oblak to make the unorthodox save with his face.

For all the Spaniards expert defensive guile, they're no mugs when it comes to attacking either and served notice of their intention through Rodrigo de Paul, who was denied by an excellent save from David de Gea.

United had claims for a penalty turned down when Fernandes tangled with Jose Gimenez, but nothing - of course - was given before Diego Simeone's side had the ball in the net but Joao Felix was flagged offside.

Four minutes before the interval, and Atleti did go ahead in very contentious circumstances. A clear foul on Elanga by Gimenez went unpunished and Fred was also clattered by Herrera as the visitors broke upfield.
Antoine Griezmann crossed for Lodi to head in at the back post beyond De Gea but despite United's vociferous protestations the goal stood.

Oblak saved well to keep out Fernandes and Elanga flashed a shot wide shortly after the restart.

Atleti showed why they're the masters of the dark arts as they disrupted, stifled and strangled the life out of Rangnick's Reds with keep ball and time wasting at every opportunity.

Jadon Sancho fizzed a volley over the top having been picked out by Dalot and the Spanish champions went close at the other end when a Gimenez header narrowly cleared the bar from a De Paul corner. 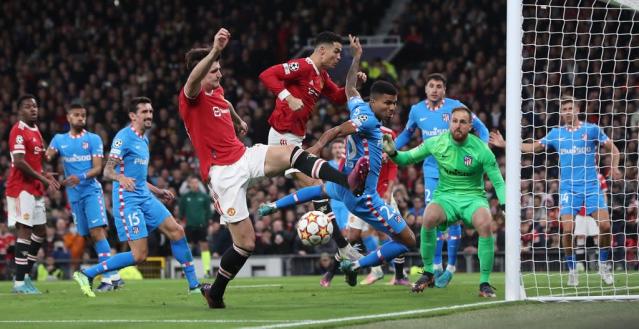 Fernandes whipped in a free-kick which narrowly evaded the onrushing Cristiano Ronaldo and Harry Maguire, before a triple change from Rangnick saw Rashford, Pogba and Matic come on for Elanga, Scott McTominay and Fernandes.

United were caught between a rock and a hard place - we had to attack and take the game to Atleti but, in so doing, left the back door open on the counter. Felix had an audacious effort from range but United continued to press and came close to a leveller when Oblak saved superbly to keep out Raphael Varane's header.

Dalot fired wide from distance with Edinson Cavani and even Juan Mata thrown on in a valiant attempt to force extra-time.
Technical director Darren Fletcher was yellow carded but the referee continued to ignore Atletico's blatant attempts to disrupt United's rhythm.

Rashford's deflected cross gave the Reds one final set piece for which de Gea was sent up, but Oblak plucked it out the sky and United's Champions League dreams were over.

Overall team performance: 6/10
United Faithful Man of the Match: Slavko Vincic. What an incredible performance from a magnificent ref.