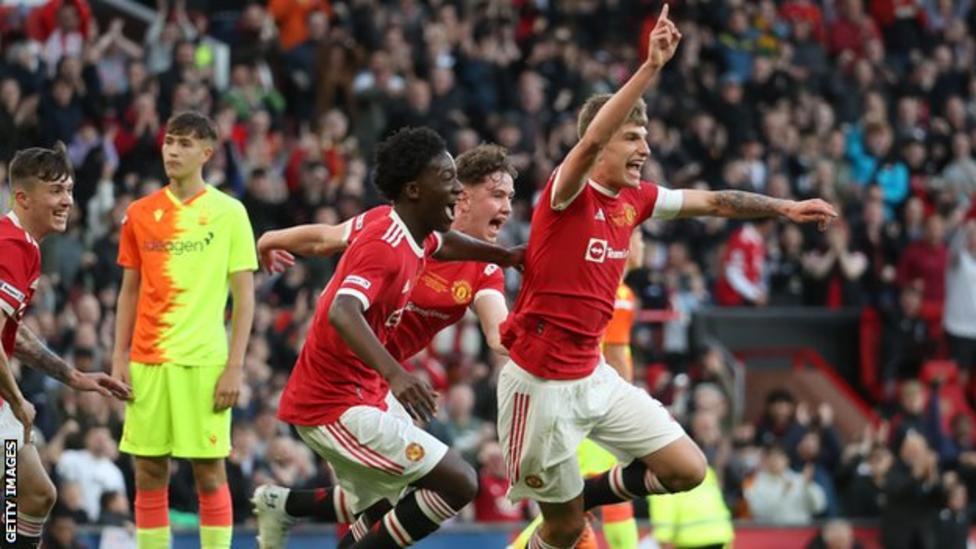 Not since 2017 have the club seen silverware of any kind but the five-year drought is over thanks to the youngsters, who have lit up a desperately dark season at the club. Some of these lads surely deserve a chance in Ralf Rangnick's side for the last game of the senior team's campaign at Crystal Palace.

Travis Binnion's young charges rose to the occasion at Old Trafford in front of the biggest crowd in the competition's 70-year history  - 67,492 - as two second half goals from Garnacho saw United run out winners over a hard-working Nottingham Forest side.

It is United's first triumph in the tournament since 2011 when a side featuring Michael Keane, Jesse Lingard, Paul Pogba and Ravel Morrison beat Harry Maguire's Sheffield United 6-3 on aggregate in the two-legged final.

Maguire was in attendance here as United captain Rhys Bennett headed his side front on 13 minutes. Sam Murray's clipped free-kick cross found the onrushing skipper and he rose to plant the ball beyond Forest keeper Aaron Bott who will feel he should have done better.

Justin Hanks headed over the bar for the visitors, managed by former United youth supremo Warren Joyce, back on familiar territory. Garnacho curled wide after good build up play from the eye-catching Kobbie Mainoo, and the same player then went close again after Dan Gore had picked him out.

Garnacho was crowned the Jimmy Murphy Young Player of the Year before kick off and certainly showed why he is tipped to become the next big thing off the Carrington conveyor belt with an impressive performance.

Two minutes before the break and Joyce's boys were level when Josh Powell tried his luck from distance and the ball slipped from Radek Vitek's grasp to find its way in.

The United keeper made amends for his error shortly after the restart though when he went down bravely in the box to block at the feet of Dale Taylor.

Bott saved well from the prolific Charlie McNeill, Garnacho had an effort blocked and Mainoo was thwarted in a tackle as he shaped to shoot.

Bott then denied Marc Jurado from distance after he had cut in, with the loose ball just out of the lurking McNeill's reach.

Vitek was called into action at the other end when Detlef Esapa - Osong fired on goal, and the Czech Under-19 keeper then plucked a teasing cross out the air as battling Forest sensed an upset.

Extra-time looked to be on the horizon at 1-1 and with little to separate the sides, but on 78 minutes Garnacho was released and scythed down by Zach Abbott. The foul looked to have occurred on the edge of the penalty area but the young Argentina dusted himself down and fired beyond Bott to restore Binnion's side's lead.

Substitute Joe Hugill flashed a shot wide as Forest began to tire on the expansive and energy sapping Old Trafford pitch.
With eight minutes added on, Garnacho added gloss to a slightly flattering scoreline when he stormed clear down the left and finished well beyond the advancing Bott with the aid of a deflection.

Congratulations to Binnion, his staff and all the young players on a brilliant achievement.