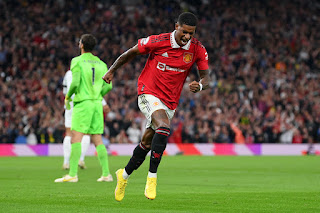 Manchester United ignited the Erik ten Hag era with a stunning victory over old rivals Liverpool on a memorable night of sound and fury at Old Trafford.

The Dutchman had endured a difficult start to life in the United hotseat with chastening defeats to Brighton and Brentford but lifted the mood with a surprise victory over Jurgen Klopp's out of sorts Merseysiders.

Liverpool remain winless and can have few arguments with the result on a night when ten Hag's side finally showed what they are capable of.
Jadon Sancho's stunning opener lifted the roof off Old Trafford and substitute Anthony Martial set up Marcus Rashford to run through and fire in the second.

Mo Salah's late finish set up a frantic finale but, in truth, the visitors never looked like salvaging an undeserved point.

ten Hag took an almighty gamble in his team selection as he left star forward Cristiano Ronaldo on the bench along with much-maligned captain Harry Maguire. Raphael Varane partnered Lisandro Martinez at the back with the returning Martial also among the substitutes. Another summer signing, Tyrell Malacia, usurped Luke Shaw at left-back.
New signing Casemiro was unveiled before kick off and how he must have relished the blood-and-thunder of a magnificent atmosphere at Old Trafford.

United showed a statement of intent early on as Rashford set the tone for the night when he burst in behind and almost got a shot away, but Virgil van Dijk intervened and cleared to safety.

The Reds came even closer in the ninth minute when Scott McTominay picked out stand-in skipper Bruno Fernandes, who moved the ball on to Anthony Elanga on the stretch. The young winger struck his shot well and looked poised to score, only to be denied by the post.

The breakthrough was not long in coming, though. Slick and fluid football from the Reds saw us cut a swathe through Liverpool's backline as Elanga found Sancho. Despite being faced with a posse of players in pursuit, Sancho left them with twisted blood to sit down James Milner and finish superbly in the corner as Old Trafford erupted.

Luis Diaz shot wide and the again impressive Christian Eriksen went close at the other end when Alisson saved superbly from the Dane's inswinging free-kick.

Liverpool began to exert their authority with their trademark pressing and intensity but United's defence - marshalled expertly by Varane and Martinez - combined well to keep them at bay. Martinez got a slice of luck his colossal performance deserved when he cleared an inadvertent deflection from Fernandes off the line at a corner on the stroke of half-time.

Martial replaced Elanga to give United more pace up top and switched Rashford to the left where he was given licence to torment and terrorise an out of sorts Trent Alexander - Arnold.

Eight minutes after the interval, United moved further ahead and put clear daylight between themselves and the old enemy. Superb link play from substitute Martial released Rashford who beat the offside trap and rolled in beyond the advancing Alisson.

Rashford flashed a shot over the bar after a superb solo run, and Martinez then blocked superbly to thwart Salah as the talismanic Egyptian looked to poke in.

De Gea saved from substitute Fabinho before the Liverpool man's compatriot Alisson kept his side in the game with a stunning save to keep out Rashford low down.

Strong hands from United's Spanish stopper saw him tip wide from Firmino, but there was little he could do to prevent Salah's close range finish, setting up a nervous finale with nine minutes to go.

Ronaldo screwed a volley wide and Martial almost found fellow sub Donny van de Beek, but the cutback was intercepted. Five nerve-shredding minutes were added on but United stood strong to hold out for an extraordinary victory and kick start the ten Hag era.