Three games in and winless, the team looking lacklustre and an inquest into what is going wrong.
Few would have been shocked at the outcome of events at Old Trafford in the 210th meeting between the Reds of Manchester and Merseyside.

Not many would have picked that team to be Liverpool.

Manchester United outran and outworked them, superb to a man, playing with a level of energy, intensity and endeavour which has become a Jurgen Klopp side's trademark. The same qualities conspicuous by absentia in the early day of Erik ten Hag's tenure.

But right from the start, this was a different United. A new United. ten Hag's United.

Perhaps the game was won even before it began. ten Hag gambled with his reputation when he dropped much-maligned captain Harry Maguire and, even more seismically, his talismanic striker Cristiano Ronaldo. He knew it was a selection to be criticised and scrutinised if it backfired.

Lisandro Martinez had usurped Maguire as United's scapegoat. An easy target as a diminutive debutant in the Premier League. He was hooked at half-time in the Brentford debacle, hooked by the man who had just bought him. Raphael Varane, benched in his captain's stead, came in here with the two England internationals either side of the Argentine international gone. Martinez? Magnificent. Colossal. A night where he came of age.

Tyrell Malacia had been our only bright spot of a desperate day in west London and got his chance here. He did not disappoint. Malacia looked like he'd been there all his life and caught the eye with his tenacity and temerity.

There was a theory this game would actually prove easier for some of these players. Fewer long balls, less pressure, not as much of a physical battle and the mere presence of the old enemy in front of a crowd baying for blood to give them that extra 5%.

There may have been derision and division towards the owners, but the fans were united in every sense for the players. As the old adage says, derbies like this are almost anomalies. One offs. A big leveller.

United went at Liverpool with gusto. We showed more fight, passion and commitment in the first ten minutes than in the entirety of last season.
Anthony Elanga was only involved in the first half, but his influence in setting the tone and tempo should not be underestimated. He set up one and came within inches of scoring another. He cast the dye with his infectious energy and stomach for the fight. 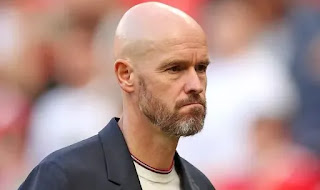 Trent Alexander - Arnold holds a reputation as being defensively suspect and that was in evidence again here. Not for the first time, he struggled hugely at Old Trafford. If Elanga lit the touchpaper, then Sancho lit up the room. The calmest man in Manchester sent James Milner down Sir Matt Busby Way and sold Alisson a delicious dummy for the opening goal as Virgil van Dijk simply stood and watched with his hands behind his back.

The fact it was Marcus Rashford who scored what proved to be the winner was fitting as he capped a performance for the ages. This was the Rashford of old, I'm delighted for him, he deserved it and is running himself into form.

His decision to pack the team with pace and trickery and add a sprinkling of youth fully vindicated ten Hag's decision to leave out Ronaldo. ten Hag stressed there is a squad at his disposal and different matches will need different skills and qualities, denying the idea Ronaldo won't be a part of that. He may well be. But this is surely the template now, the blueprint, the raison d'etre. He may regret he ever deviated away from it in the first place.

When Anthony Martial was injured in pre-season, his response was to shoehorn Christian Eriksen as a false nine against Brighton then draft in Ronaldo at Brentford. The inclusion of Elanga here surely indicated this is closer to what the manager wants.

There was a frantic finish when Salah bundled in at the back stick with nine minutes left but what was striking was the togetherness and temperament of the team. Heads didn't drop and the seemingly inevitable siege did not ensue. United did not buckle and managed the game with maturity and intelligence. This needs to be the rule and not the exception, merely more than just a reaction to the visit of the enemy or a gathering crisis. So many stood tall when it mattered most.

Bruno Fernandes had his best game for months. Captain for the night but perhaps for longer, he roared at the crowd to raise the decibel levels as he scrapped and battled when closing down near the touchline in the first half. In the final moments as United held their nerve, he was darting back to shut down Alexander - Arnold at the near post.

There was the sight of Malacia receiving a standing ovation for a tackle in the corner. Varane geeing up the crowd behind the goal as the clock ticked down. Martinez blocking everything and even Ronaldo giving his all for the cause. This was more like it. This is all we ask for. A team that tries.

But it was David de Gea who seemed to sum it all up. Here he was, the familiar sight of United's Spaniard, always in the spotlight, fists pumping as he was carried down the tunnel by a wall of noise from the Stretford End. Nine days after the debacle at Brentford, the mood was transformed.

The Erik ten Hag era roared into life and United have lift off.