There have been more consequential games between the Premier League heavyweights of Chelsea and Manchester United. Louder games. Better quality and more exciting games. But never one which has felt like such an intellectual tete - a - tete between two of the most highly rated managers in the game. 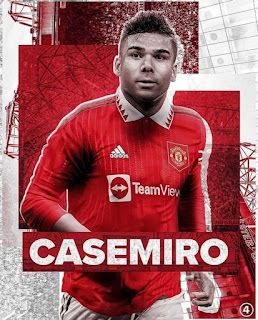 As the recently installed bosses Graham Potter and Erik ten Hag traded erudite blows on the touchline, the evening began to splinter a little. Not so much a single game of football as several distinct campaigns, a ceaseless and gripping tactical battle for supremacy in which both teams probably got what they deserved.

Perhaps there was a perverse sense of poetry in the late drama that belatedly set this game alight. The substitute Scott McTominay clumsy, if perhaps unfortunate, as he sent Armando Broja to the turf. The new arrival, Casemiro, who ended up getting his team-mate off the hook with a towering 94th-minute header.

This is a rapidly evolving and improving United side and nowhere is the transition more evident than in midfield. If anything epitomised the difference in quality between United's two-tone midfield, this was surely it. McTominay the passionate and hard-working, if limited, squad player and the five-time Champions League-winning Brazilian international regarded as one of the finest exponents of his craft. The new tempo-setter, the difference maker and the string-pulling heartbeat of ten Hag's Manchester United.

McTominay will still have a role to play and Fred was simply sensational in the midweek win over Tottenham. Both of them are internationals and useful players to have in your squad, but the era of "McFred" - in tone and intent - feels like it has gone. It was clear for all to see the pair were incompatible but the persistence with them was part of the reason why Ole Gunnar Solskjaer accelerated his own downfall. ten Hag realised he, and his side, needed an upgrade.

Enter stage left, Casemiro. Having spent all summer locked in a futile chase for the apple of his eye in Frenkie de Jong, you got the feeling the former Real Madrid was never ten Hag's first choice. But boy, will the Dutchman be pleased he eventually landed him. The difference Casemiro has made since arriving from Los Blancos is the biggest single reason behind this side's upward trajectory. Casemiro. Christian Eriksen. Bruno Fernandes. For the first time since the days of Paul Scholes and Michael Carrick, this is a United midfield you would willingly pay to watch.

And when it works, everything else works so much better, too. The full-backs have the security to bomb forward, the front three can make runs in behind knowing there will be service. David de Gea has more options and the defence can play higher up. The midfield has become a place where United can move the ball rather than - as has been so often the case - an engine for moving it somewhere else.

So often, the midfield is where games are won and lost and, for the first time in what seems like an eternity, United are taking on some of the best midfielders the English game has to offer and winning the battle.

This is a shift in culture as well as personnel. ten Hag wants to build a free-flowing, possession-based side and Casemiro is integral to that. Our ambition, calmness and confidence on the ball epitomised everything Casemiro has brought to this side - we have needed a player of his quality and class for years.

You could pinpoint the moment when the extent of the difference he makes came to fruition only a few minutes into the game. He collected the ball 20 yards from his goal with three Chelsea players for company. Facing the wrong way, there was a simple spin and a pass of the purest silk, curling 30 yards over the head of Raheem Sterling to set Diogo Dalot away on a run down the right. Can you imagine McTominay, Nemanja Matic or Marouane Fellaini even considering such an option never mind pulling it off?

Not only is he everything a top quality defensive midfielder should be: adept at breaking up play, winning the ball, moving it on and both starting attacks for his team and stopping them for opponents, but he has an under-rated range of passing in his locker too. He's not known for his heading or ability in front of goal but he popped up with United's late, late leveller to earn a deserved point and capped a simply magnificent individual performance with a goal. Casemiro was the best player on the pitch by a mile and makes the ugly side of the game look so simple and beautiful. 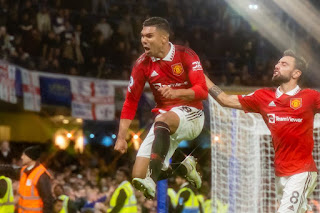 Then there was the moment on the half hour mark, when Eriksen pickpocketed Ruben Loftus - Cheek high up the pitch. Casemiro came away with it, Fernandes ran off him and for a moment the three of them were away and gone like a little lightspeed triangle. The move ended with Kepa's save from Marcus Rashford, but such was United's midfield superiority that Potter, with his midfield getting swamped and bogged down, had to act. The introduction of Mateo Kovacic restored an extent of equilibrium and led to Chelsea's best spell of the game. How often do you see a manager make a tactical sub before half-time at any level, never mind at the highest echelon of the game? It said it all.

Even amid the late drama, it was possible to glimpse how ten Hag's side are still developing, still training their instincts, not quite yet the finished article. But even the most ardent 'ABU' cannot deny the scale of this side's improvement. Admittedly, it was a very low bar from last season but the progression is there for all to see. United look a really good side again and this is the best I have seen us in years. Finally we have an excellent, modern and forward thinking coach worthy of the name, a defined style of play with a balanced build up and a mix of youth and experience. Most of all, we have a proper, competent, functioning midfield. Welcome to modern football, Manchester United. It's been a while!