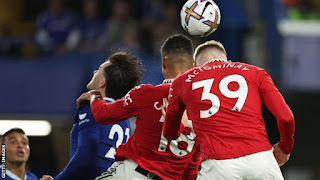 Casemiro's last gasp header cancelled out a contentious Jorginho penalty to earn United a dramatic point in thrilling late drama at Stamford Bridge.
A largely uneventful game burst into life late on when the Italian's goal from the spot looked to have earned Graham Potter's men a narrow win three minutes from time.

But Erik ten Hag's improving Reds never know when they're beaten and pilfered a richly deserved point when man of the match Casemiro capped a colossal individual performance with a 94th-minute header to spark scenes of wild celebrations among visiting fans, players and management.

The Champions League winner has made a huge difference to this side and a player not known for his goalscoring prowess rose to meet Luke Shaw's 94th-minute cross to power home a header despite Kepa's best efforts to keep it out. Replays showed the ball had crossed the line by a matter of mere millimetres but they all count and it was the very least we deserved for our efforts.

Amidst the furore surrounding a certain Portuguese no.7 and his Old Trafford future, there was one alteration from the side which had so impressively beaten Tottenham in the week. Christian Eriksen returned in place of Fred in an otherwise unchanged line up.

United quickly set the tempo in the opening exchanges, dominating possession and pressing high whenever a dangerous Chelsea side had the ball. It almost paid off when Shaw's buccaneering run from left-back saw him have a dig at goal only to see his 25-yarder flash narrowly wide of the post.

Kepa saved well from the again impressive Antony with the Reds in complete control in the opening 30 minutes but with no goals to show for our superiority. But that nearly changed when Marcus Rashford - playing through the middle - burst into the box on the counter and found himself one on one with the Chelsea stopper.

But he was unable to beat the in-form Spaniard as Kepa raced out to thwart the onrushing Rashford from a position where our no.10 should really have done better.

The nature of United's dominance spoke volumes as Potter made an early tactical change ten minutes before half-time when he replaced ex-Brighton cohort Marc Cucurella with Mateo Kovacic to stem the flow and to try and get hold of midfield.

Mason Mount and Raheem Sterling linked up to almost put Chelsea into a half-time lead against the run of play whilst Antony went close again at the other end when he shot wide on his weaker right foot.

Chelsea gave out with an improved intensity and had more of the ball but clear cut opening remained at a premium. There was a huge blow for United and - with the World Cup looming - France when classy defender Raphael Varane left the pitch in tears with a nasty looking injury on the hour mark.

Victor Lindelof came on but United's defence is simply not as strong without the quality and presence of our Rolls Royce-esque no.19.

Trevor Chalobah nodded against the bar from a corner and Bruno Fernandes fired wide at the other end, before the tie burst into a dramatic denouement.

Substitutes Armando Broja and Scott McTominay came together from a corner as the latter sent the former sprawling in the kind of tussle you see 30 times every game all over the pitch. But referee Stuart Attwell point to the spot and penalty specialist Jorginho sent David de Gea the wrong way to seemingly hand Chelsea a fortuitous victory.

But this Reds team is made of stern stuff and refused to buckle. Defeat would have been extremely harsh on the impressive visitors and, with six minutes added, Shaw drove down the left and floated a ball into the area at the back post. Casemiro rose to meet it and, although Kepa got a hand to it, the ball struck the post and over the line as the Brazilian wheeled away in a euphoric celebration of his first Reds goal.

In truth, a draw was a fair result with United having collected ten points from a possible 15 against the other 'big six' sides to remain one point outside the top four at the culmination of a difficult run of games.

Overall team performance: 7/10
United Faithful Man of the Match: Casemiro. The best player on the pitch by a mile.