Cristiano Ronaldo scored the 700th club goal of his career as United survived a late Everton onslaught to move to fifth in the table.

Ronaldo - criticised by all and sundry for his midweek misses against Omonia - came on for the struggling Anthony Martial to fire in his historic goal on the cusp of half-time. 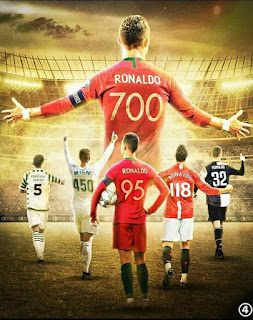 Antony had earlier levelled for United with his third goal in as many league games, after Alex Iwobi had curled the in-form Toffees ahead.

The night would have been much more comfortable for Erik ten Hag's side if not for the simply baffling decision to disallow a late Marcus Rashford goal - apparently your chest is now part of your arm - after the ball deflected off Jordan Pickford from less than a yard away. A call made all the more questionable by the fact West Ham's Michail Antonio had a goal given in identical circumstances leaving fans bewildered at the lack of clarity and consistency.

ten Hag made three changes from the midweek win in Cyprus as Martial, Marcus Rashford and Luke Shaw came in for Ronaldo, Jadon Sancho and Tyrell Malacia. Casemiro started at the base of midfield with Raphael Varane fit enough for the bench.
With questions asked about the side's mentality in the wake of the demolition derby, the last thing the Reds needed was an early concession. Even at 30, Casemiro perhaps showed a touch of naivety when he was dispossessed by Amadou Onana. He might have got a free-kick in Spain, but this is the Premier League and referee David Coote allowed play to continue. Iwobi seized on the loose ball and left de Gea stranded with a stunning 25-yard curler.

Given this side's semblance to go under at the merest hint of a setback, you feared the worst but, to their credit, United hit back and were level only ten minutes further on. Antony became the first United player to score in his first three league games for the club when he was put clear by namesake Martial to finish superbly beyond Jordan Pickford.

Martial had been selected for his first start of the season but sustained an injury in the warm up and limped off after half an hour, to be replaced by Ronaldo. The Frenchman simply has no luck with injuries and this was his third different ailment eight games into the campaign.

Christian Eriksen fired over from distance and Pickford saved well from Bruno Fernandes before the period of pressure culminated in Ronaldo's record-breaking goal. It was a goal made in Madrid, too, as the former Los Blancos team mates combined to deadly effect. Casemiro's slide rule pass released Ronaldo to sprint clear and fire in an excellent strike across Pickford to put the Reds in front at the interval.

Everton, unbeaten in seven and on an upward trajectory under Frank Lampard, had a renewed vigour but were unable to seriously test David de Gea.
Rashford headed wide, Diogo Dalot went close and Eriksen was narrowly off target as United's passing and pressure looked to reap the rewards with the game clinching third goal.

It looked set to have arrived in the 80th minute when Rashford latched on to Ronaldo's flick on and burst clear. Our in form no.10 skipped beyond the advancing Pickford and tucked the ball home but the goal was incredibly ruled out after it had ricocheted off the Toffees stopper and on to the arm of Rashford. It seemed the referee wanted an exciting finish and was told to give Everton the momentum going into the closing stages.

With the fit again Dominic Calvert - Levin, so often United's scourge, on after his return from injury, and the Reds rocky record at Goodison Park, nerves were jangling as the clock ticked down. Perhaps sensing the visitors uncertainty, Everton laid siege to the United goal in the dying moments.

Onana nodded over from Demarai Gray's inswinging corner before fellow substitutes Dwight McNeil and Calvert - Lewin then linked up as the former's cross narrowly evaded the onrushing latter at the back post.
Onana flicked a header wide after Gray had picked him out, before Raphael Varane thwarted substitute Salomon Rondon with a lunging block. de Gea was then called into action through a superb save to deny former team-mate Garner. From the resultant flag-kick, Calvert - Lewin came within inches of his customary goal against United but headed wide from close range.

In truth, a draw would have been harsh on United as the improving Reds deservedly held on for their fifth league win in eight games under ten Hag.