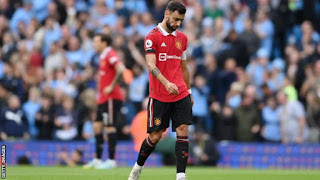 Foden's double and Haaland's brace put City out of sight by the interval before Antony's screamer preceded the completion of Haaland's treble and then Foden's. Substitute Anthony Martial headed a consolation and then converted a late penalty to give the scoreline an air of respectability. But, in truth, this was a largely one sided contest although United's improved second half rally at least saw us emerge with some positives.

For all the Reds recent revival of fortunes, City served up a reminder of just how far ahead they are of everyone else - and of how far United have still to go.
There was no surprise with Erik ten Hag's team selection as the Dutch boss kept faith with the side that beat Arsenal 3-1 in their last Premier League outing back in September.

In our first game for 17 days, City were dominant from the off and instantly laid siege to David de Gea's goal. The Spanish stopped saved well from Kevin de Bruyne and Scott McTominay then threw himself in the way of Bernardo Silva's follow up.
United's gameplan of keeping it tight early on went out the window five minutes further on when City took the lead through Foden, his first Manchester derby goal. Bernardo Silva was involved once again when he picked out the onrushing local lad to sweep the ball beyond the stranded de Gea and into the top corner.

Ilkay Gundogan rattled the post from a set piece and Joao Cancelo then fizzed an effort narrowly over the bar from a corner.
United managed to escape from further damage until eleven minutes before half-time when Haaland - who else - rose to power home de Bruyne's header despite Tyrell Malacia's ultimately futile attempts to clear off the line.

The Reds were simply unable to stem the flow as City's lightning start showed no signs of abating. On 37 minutes, City's no.9 struck his second of the game, and his side's third, when he combined again with de Bruyne. For my money the two best players in the world, the latter controlled and picked out the former to finish off a fine, five-man move in style at the back post.

Things were to get even uglier for the outplayed and outclassed Reds as Haaland turned provider for Foden a minute before the break. The Blues fourth goal was a mirror image of their third as a superb move, which involved Silva, Gundogan and de Bruyne, culminated in Foden's drilled finish having been picked out by City's all-conquering no.9.

To quite literally add insult to injury, United's in-form centre-back Raphael Varane limped off with an ankle injury in the midst of the chaos. Victor Lindelof came on for his first league appearance of the season and Luke Shaw then replaced the struggling Malacia at the interval.

Bruno Fernandes stung the palms of Ederson before new signing Antony pulled one back in spectacular style with a 25-yard curler for his second Premier League goal in as many games.
That only proved the catalyst for another City onslaught as the relentless Haaland thumped home his third having been picked out by substitute Sergio Gomez - the unplayable Norwegian's third successive home hat-trick and 17th of the season.

But still City were not done as they threatened to outdo their record league win against United - the 6-1 win at Old Trafford in 2011/12 when they went on to win the league.
They duly equalled that tally on 72 minutes when Foden beat the offside trap to hammer home from close range despite a VAR check to see if the ball had gone out of play after more excellent play from the Norwegian striker.

Three goals and two assists - the man is not human and comes from a different planet. It is hard to see anyone stopping City with him and his side on this form.

Martial, who had earlier come on for the anonymous Rashford, scored twice late on to at least provide United with a semblance of pride. He nodded in after fellow substitute Fred had an effort saved by Ederson, and then smashed home an 89th-minute penalty having been scythed down by Cancelo. The goal was greeted by near silence from the away end but proved little by way of consolation and gave the scoreline a slightly misleading look.

Overall team performance: 5/10
United Faithful Man of the Match: Anthony Martial. Only played half an hour but did well in his cameo.