Come in number 34 your time is up

No one can have been more delighted to see Erik ten Hag appointed at Old Trafford than Donny van de Beek. 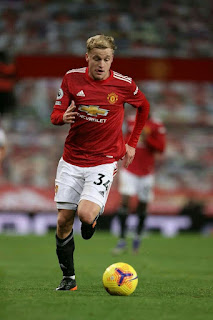 Now in his third season in the English game, it still feel like van de Beek is yet to truly arrive - if he ever does. ten Hag was seen as van de Beek's best shot of a revival at Old Trafford. After all, United's current gaffer was the manager that helped put him on the map at Ajax. But his compatriot - van de Beek's fourth different United manager - has been just as baffled with how to solve a problem like Donny as his immediate predecessors. Sometimes despite the best efforts of all parties, the component parts are simply incompatible.

That was the impression you got from watching the disparate Dutchman on Sunday at Villa.

It was his second successive start and his first in the league for 701 days. It is surely his last. Ole Gunnar Solskjaer was widely criticised for not giving van de Beek, a player he signed (but never really wanted), enough chances but he did. It's just van de Beek did nothing to justify his selection every time he played. With a stroke of delicious irony, perhaps his best performance in the Red of United came in the second half of the 4-1 defeat at Watford which brought about the end of Solskjaer's reign. Is it any wonder Solskjaer didn't believe in him despite numerous chances to prove his worth?

van de Beek's no show inadvertently proved why Fernandes remains this side's most important player. Such is Fernandes' crucial role as string pulling architect-in-chief, almost everyone felt Christian Eriksen would move into the attacking tip of ten Hag's three man midfield system. The Danish playmaker has been used in a slightly more withdrawn role since his signing in the summer, but his natural attacking instincts and ability to make things happen seemed to suggest he was tailor-made for the number 10 role.
It seemed obvious either Scott McTominay or the World-Cup bound Fred would fill Eriksen's void and slot in alongside Casemiro, not only offering an extra layer of 'beef' in midfield but also allowing Eriksen's star to shine. But ten Hag, despite van de Beek's anonymity in San Sebastien, again stuck with him. He surely cannot persist with him any more.

Whilst it's true none of the team covered themselves in glory on a bad day at the office in the Midlands, van de Beek's struggles were the most noticeable. Quite how he lasted 65 minutes before being hooked again is beyond me. The first time you noticed him was when the number 34 flashed up on the electronic substitutes board, signalling his imminent departure. He managed only 18 touches in the game and proved more of a hindrance than a help. You had to feel for him a bit as he trotted off, head bowed, after another afternoon in anonymity. 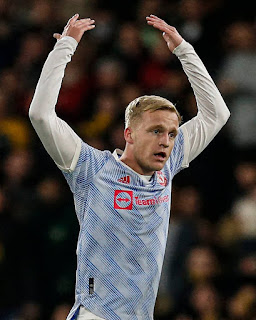 He looks completely and utterly lost in the Red of United - all at sea, out of place and completely incompatible with the stresses and the strains of our 100mph English game.

If even ten Hag, the man who literally invented Donny van de Beek, cannot spark him into life, then it is surely the end of the road for the player. Sometimes, a player can look the business in Europe but then come here and just not 'be it'. van de Beek epitomises that. He is simply not good enough for the Premier League and four different managers can't be wrong. Five if you include Frank Lampard when the player spent half of last season on loan at Everton.

Of course, he has not long returned from injury and only started at Villa Park by default. But his United career has failed to live up to expectations for far too long, meaning there is a growing belief both the club and van de Beek might have to accept it just hasn't worked out. Relative to expectations, he surely has to be one of the worst players I've seen in a United shirt.

I don't want to make this sound like a personal vendetta or an attack against the player, but I just do not see what he does, or what he is supposed to be. Is he ten? A six? An attacking player, or a box-to-box playmaker? There is simply no identity - baffling for someone signed from a club synonymous for exactly that.

It's time to amicably part ways and move the player on in January. Come in, number 34, your time is up.