Manchester United felt the full force of Unai Emery's impact as struggling Villa ignited their season with a deserved win over an off-colour Reds side. 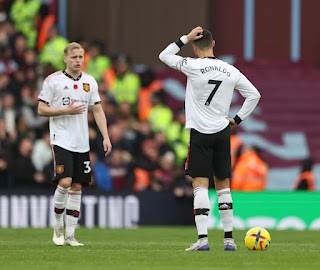 Erik ten Hag's depleted team slipped to a first defeat in nine games as Emery - in his first game in charge of the west Midlanders - guided his new side to an impressive victory. Leon Bailey fired in an early opener and Lucas Digne's free-kick saw United go 2-0 down before we had even had a chance to draw breath.
Luke Shaw's deflected effort gave the side hope but Jacob Ramsey extinguished any chance of a fightback with an early second half strike.
United were without several key players including the injured Raphael Varane and Antony, with Bruno Fernandes suspended and Jadon Sancho also sidelined. Anthony Martial was fit enough for the bench. Perhaps somewhat surprisingly, Cristiano Ronaldo was handed the captain's armband.
Villa, to their credit, caught United napping and went ahead after only seven minutes when the eye-catching Ramsey dispossessed Victor Lindelof and held off Lisandro Martinez to play in the onrushing Bailey, and he fired in low beyond the stranded David de Gea.
With the white-clad Reds (you know what we mean) still reeling with that shock to the system, things got worse four minutes further on when Ramsey was scythed down and Digne's superbly struck set piece left de Gea with no chance after referee Antony Taylor moved the United wall back too far.
United belatedly sparked into life and finally began to press, pass and make life difficult for Villa. Alejandro Garnacho, on his first Premier League start, forced a save from compatriot Emiliano Martinez having been played in by Christian Eriksen.
Ronaldo went close with a header and Casemiro shot wide before an improved United side got the goal their pressure deserved, albeit with a huge slice of luck thrown in. Luke Shaw's speculative shot from distance looked to be sailing harmlessly wide until it struck Ramsey and looped up over the motionless Martinez.
At that stage, on the cusp of half-time and with United in the ascendancy, you would have got good money on ten Hag's men mounting a recovery.
The next goal was crucial and it was Villa who got it with United hit quickly just as they were from kick-off.
Bailey skipped past Martinez and stung the palms of De Gea but - three minutes later - Ollie Watkins burst clear of Lindelof and cut the ball back for Ramsey to slam the ball into the corner first time.
Both Tyrone Mings and stand-in skipper Ronaldo were booked after a tussle in the penalty area and the Reds had optimistic claims for a penalty waved away when the Villa keeper Martinez clashed with substitute Anthony Elanga.
United's best opening after the interval fell the way of right-back Diogo Dalot. Casemiro found the Portuguese player, who sprinted through, but he opted to cross instead of having a shot. The ball fizzed beyond every United player and Villa cleared their lines.
Martial was introduced with 25 minutes to go but Emery put the squeeze on ten Hag's men as Bailey and Ramsey dropped back to force United through the middle and snuff us out.
They did so successfully as United frustratingly ran out of ideas. Dalot picked up a booking - his fifth of the season - which means he will miss the next league game at Fulham (although it does allow Dalot a long overdue rest).
So United's unbeaten run is over but let's hope this was just a blip, a bad day at the office,
Overall team performance: 5/10
United Faithful Man of the Match: Casemiro. At times, a one man midfield.
Posted by United Faithful at 07:16
Labels: match reports