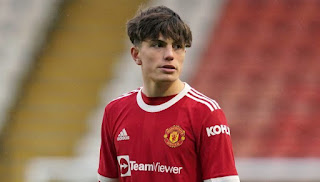 United snatched a dramatic 93rd-minute winner through teenage substitute Alejandro Garnacho in the last Premier League game before the World Cup.
As the domestic season takes an unprecedented hiatus as the tournament is played in Qatar, Marco Silva's plucky Cottagers suffered an agonising - and, in truth, undeserved, late loss for the second week in a row.

Denmark captain Christian Eriksen slid home his first United goal in the 14th minute before ex-Red Dan James stepped off the bench to equalise for a vibrant and impressive Fulham side. But just when a United old boy looked to have cost his former side victory, Garnacho - very much United's future - squeezed home his effort with the final kick of the game. Eriksen picked out the onrushing Argentine and he raced through to poke home across Bernd Leno and spark scenes of wild jubilation among the visiting fans, players and coaching staff.

A draw would have been a fair result but the importance of this simply enormous victory cannot be underestimated as Erik ten Hag's side go into the break three adrift of fourth placed Tottenham, and four of place above Newcastle, with a game in hand on both.
With Antony and Jadon Sancho both absent, Cristiano Ronaldo not in the squad and Diogo Dalot suspended, Anthony Elanga started on the right as Anthony Martial returned for only his second league start of the season. Tyrell Malacia was drafted in as a makeshift right-back in the absence of United's erstwhile ever-present Portuguese. In a boost for the Reds, Fulham dangerman and talismanic striker Aleksandar Mitrovic missed out through injury.

It was the Serbian's deputy, Brazilian forward Carlos Vinicius, who had the first effort of the contest. The ball was played into him by Premier League veteran and compatriot Willian only to see his shot saved by David de Gea.

Martial showed glimpses of his menace as he went close to putting the visitors ahead on 12 minutes. Luke Shaw and Marcus Rashford linked up down the left and the latter did well to tee up Martial, but ex-Arsenal keeper Leno tipped the ball wide with a good low save.

Fulham, who finally looked to have established themselves at this level after years of being the league's "yo-yo" club, failed to heed those warnings. Only a few minutes after that miss, United took the lead as Eriksen's first goal for the club capped off a superb quick sweeping team move.

Casemiro's timely interception set the Reds rolling with Eriksen and Martial also involved. The ball found its way to Bruno Fernandes on the right and his cross was missed by the Fulham defence for Eriksen to steal in at the back post to slide home.

de Gea saved well from Harry Wilson but United should have put further distance between themselves and their hosts with two chances in quick succession before half-time.
Martial headed over from a Shaw cross when he should have done better, and Eriksen then flashed a shot narrowly wide after Fernandes had picked him out.

If United had dominated the first half, Silva's side came out swinging and the Reds needed their keeper to keep a resurgent Fulham at bay. The Spanish stopper - whose exclusion from the World Cup squad becomes more and more baffling by the week - saved superbly from Vinicius and then from a Tim Ream header.

Silva introduced the Welsh speedster to ask further questions of his former side as Fulham pushed for a leveller and, of course, it had to be him who got it. Only two minutes after his introduction, James darted between Victor Lindelof and Lisandro Martinez to meet Tom Cairney's ball in and turn home a deserved leveller.

de Gea tipped wide from the impressive Joao Palhinha before Erik ten Hag then summoned the wunderkid to inject life into United's struggling attack. The young Argentine instantly proved a threat as he linked superbly with Rashford and Fernandes for the latter to steer an effort off target on the stretch. United then had what looked a stonewall penalty not given when the substitute Garnacho went tumbling under the challenge of Bobby De Cordova - Reid.

But just when it seemed as though United would fail to win on a weekend where all their closest table rivals did so, there was a late - very, very late - sting in the proverbial tail.

A neat one-two with Eriksen saw Garnacho's burst of pace beat the Fulham defenders to the ball and he hit his strike first time to squeeze the shot beyond Leno and snatch all three points right at the death.

Cue bedlam in the away end at the Cottage as United went into the break in a strong position to get into the top four and breathing down the necks of Tottenham and surprise package Newcastle.

Overall team performance: 6/10
United Faithful Man of the Match: Alejandro Garnacho. This kid is going to be something very special indeed.