Schweinsteiger, 30, has signed a three-year contract with the Reds from Bundesliga champions Bayern Munich for a reported £14.4m fee.
Schneiderlin has moved from fellow Premier League outfit Southampton for a fee in the region of £25m.

The 25 year old has signed a four-year contract with the option to extend it by a further year.
The two new arrivals, along with forward/winger Memphis Depay and Italian full-back Matteo Darmian takes the club's summer spending to more than £80 million (or nearly two Raheem Sterlings.)

Schweinsteiger played under United boss Louis van Gaal when the Dutchman managed Bayern between 2009-2011, and the German admitted that "United were the only club he would have left Munich for."

"I feel ready for this new and exciting challenge in what I regard as the most competitive league in the world and I am looking forward to working with Louis van Gaal again.
"I have thoroughly enjoyed my time at Bayern, it has been an incredible journey and I didn't take the decision to leave lightly, Manchester United is the only club I would have left Munich for" said Schweinsteiger.

Schweinsteiger made his Bayern debut in 2002 and appeared 536 times for the club, winning eight Bundesliga titles, a Champions League, seven domestic cups, a Club World Cup as well as helping his country win the 2014 World Cup.

Schneiderlin joined Saints from Strasbourg in 2008 for £1.2m and has risen through the ranks with the South Coast side, having played for them in League One, Championship and the Premier League.

"Once I learned that United wanted me, it was an easy decision to make, I have enjoyed seven happy years with Southampton and it's a club that will always be in my heart, but the chance to be part of this squad to help this great club be successful was too good to miss."

The two will now join their new United team-mates when they fly out to the USA for our pre-season tour on Monday. 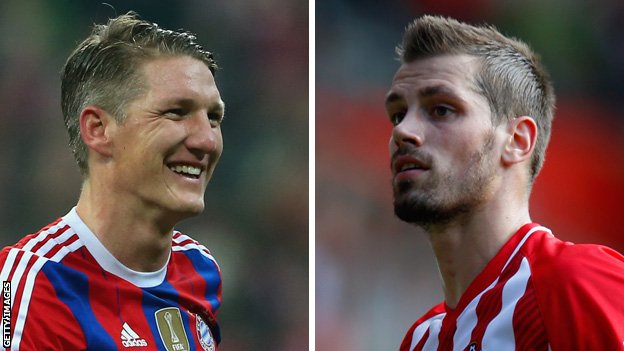