United have signed Argentinian goalkeeper Sergio Romero as a result of the ongoing uncertainty over David de Gea.

28-year-old Romero was a free agent after leaving Serie A side Sampdoria and will replace back-up keeper Victor Valdes, who has been told he can leave by Louis van Gaal.

Romero, who has signed a three-year deal played in the 2014 World Cup final and won the 2008/09 Eredivisie title under Van Gaal at AZ.

De Gea is into the final year of his contract and is wanted by Real Madrid.

There's no way that United are going to allow Dave to leave for free, but Van Gaal is covering all bases and preparing for whatever De Gea's intentions are.

"We have to prepare our season with the threat that David de Gea is going to Madrid, of course, we do not know this yet but you have to be ready in advance" said Van Gaal.

Should De Gea stay at United, van Gaal has said that the Spaniard may not be an automatic pick in goal.

"You always need competition" added the Dutchman.
"When I see that a player is better than the player in the line-up, then he shall play the next match."

Romero, who saved two penalties in a semi-final shootout as his side knocked out LVG's Netherlands en route to the final, has 62 caps.

"He is a very dominating goalkeeper, he is strong in the 60-metre area and his stature is also tall and he gives a lot of confidence to the players, so of course this is very good.

"He has to learn English because that is also a problem always with a foreign player.
"He is very good with his feet, so he fits in our profile- I have a lot of confidence that he can fulfil what we are expecting." 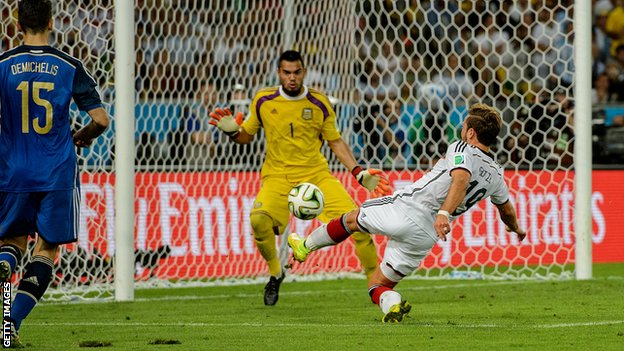