You may have heard that there's a fairly important match to be played at Old Trafford tomorrow.... it's the small matter of the 175th Manchester derby. Whilst it's too early to be deemed a title decider, it's certainly going to be a pivotal point in the season. 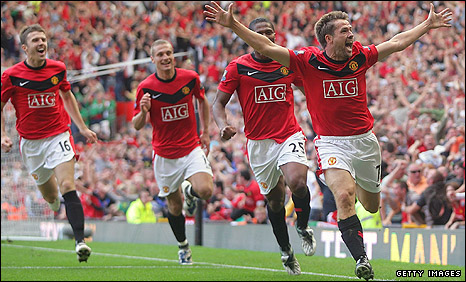 City head to Old Trafford with a 100% record on the road, whilst United are unbeaten at home in 40 matches... something has to give, the stage is set and the eyes of the world will be trained on Manchester...

To get you in the mood for the cross-town clash between the top two sides in the league, we take a look back at five recent and most memorable meetings with the noisy neighbours... here's hoping for more of the same tomorrow.

This may have only have been a Community Shield contest and not really important in the grand scheme of things, but any time we beat City is sweet. Especially so here as United, Premier League champions, were 2-0 down to Roberto Mancini's FA Cup winners (City had beaten us in the semi final and we also suffered Champions League final pain against Barcelona)  Joleon Lescott and Edin Dzeko scored twice in seven first half minutes. But count out the Reds at your peril. We came storming back and, by the hour mark, we had levelled the game. Chris Smalling turned in Ashley Young's free-kick on 52 minutes, and - six minutes later - Nani equalised with a stunning finish at the culmination of a devastating, sweeping team move. The two sides continued to trade chances, with David de Gea making three key saves, while United rattled the bar through Danny Welbeck. With no extra-time and a penalty shoot-out looming, Portuguese winger Nani pounced on some hesitant City defending to run on to Wayne Rooney's through ball, round a stranded Joe Hart and slot the ball home in the fourth minute of added time. A classic Fergie time winner.

Louis van Gaal, justifiably so, had his critics during his two soporific seasons in the United dugout. But, give the Dutchman credit where it's due - he usually got his tactics and gameplan spot on when it mattered. United went into this derby clash in red-hot form, on a run of five successive league wins in the midst of a rare purple patch under LVG, but Manuel Pellegrini's City had taken the honours in the previous five derby meetings. City arrived at OT a point and a place behind the Reds, but left with their tails between their legs: beaten, bruised and comprehensively battered. Sergio Aguero, so often the scourge of United, put them ahead inside ten minutes, but United had turned the tie on its head by half-time. Ashley Young and the revitalised Marouane Fellaini put us ahead, and from then on it was one-way traffic. Juan Mata's clinical finish put the result beyond doubt, and Chris Smalling headed home a free-kick from man of the match Young to send Old Trafford into dreamland. Aguero pulled a late goal back for 4-2, but the damage had long been done. Get in!

United headed to the Etihad having not won against our cross-town rivals away from home since 2012. Both sides were out of contention for the title and instead scrapping for the Champions League positions. This wasn't the best encounter in terms of quality or drama, but it was memorable for two reasons: the result, but also the fact that it was settled by an 18-year-old local lad on his Manchester derby debut. Barely a month into his first-team career, Marcus Rashford lit up the match and demonstrated his world-class potential with a dazzling piece of skill in an otherwise unremarkable game. In the 16th minute, he collected the ball from Jesse Lingard - the only other homegrown player on the field - and ghosted past poor old Martin Demichelis to get one-on-one with Joe Hart. Marcus dispatched an unerring finish past his future England colleague to become the youngest goalscorer in the history of the fixture. It proved a rare bright spot in an otherwise very disappointing season under LVG who - despite leading United to FA Cup glory - would lose his job at the end of the season. So too would City counterpart Manuel Pellegrini - with the arrivals of Messrs Mourinho and Guardiola set to add a fascinating subplot to the derby landscape.

One of the best Manchester derbies of all time, this was a thrilling, end-to-end encounter that fittingly ended in classic United fashion with a late winner from a player who could quite easily have lined up against us. But that doesn't even tell half the story. City had pipped United to the title on goal difference on the final day of the previous season - my therapist says I can't talk about that - and had put together a 37-match unbeaten run at the Etihad. United, having signed Robin van Persie ahead of our cross-town rivals in the summer, were top of the table and in control in the tussle for the title. Wayne Rooney's scuffed finish and close-range effort - the latter his 150th Premier League goal - put United 2-0 ahead by half-time and seemingly cruising to a routine win. But Roberto Mancini's side had other ideas and came storming back to level through goals from Yaya Toure and Pablo Zabaleta. As the game entered its final moments, it seemed United were frustratingly set to drop two pivotal Premier League points and open the door to the chasing pack. In injury time, United are awarded a free-kick 25 yards out - enter £24m man RvP. The 14-goal striker had been on the periphery up until this point, but showed he only needs one clear-cut chance to make the difference. He demonstrated his worth as the set-piece took a deflection off Samir Nasri and wrong-footed a stretching Joe Hart to send United's away end - and Reds everywhere - into euphoric delirium. Ooooh Robin van Persie!

It takes some doing for a player to be loved and hero-worshipped by fans of both United and our most hated rivals from the other end of the East Lancs Road. Whilst some Liverpool fans have never forgiven Michael Owen for joining United - the ultimate betrayal in their eyes - he will always be fondly remember for his exploits on Merseyside. He didn't have quite the same impact in Manchester, but a 97th-minute winner in a must-win derby is good enough reason for him to be catapulted into hero status at Old Trafford. This was, quite simply, the greatest ever derby in the long history of the fixture.  The sides had traded goals aplenty, with Wayne Rooney and a Darren Fletcher brace for us being cancelled out each time by Gareth Barry and two from pantomime villain Craig Bellamy (his second strike came in injury time). A thrilling, topsy-turvy and superbly see-sawing contest had swung one way and then the other until substitute Owen latched on to Ryan Giggs perfect through-pass and smashed the ball beyond Shay Given deep into stoppage time. Old Trafford erupted, City boss Mark Hughes spontaneously combusted (sorry, Sparky) and the result left champions United clinging to the coat-tails of Premier League leaders Chelsea.