Jesse Lingard stepped off the bench and headed the winner as United came from behind to sink the champions and reclaim second spot in the table. The in-form Willian had put Chelsea ahead at the culmination of a superb counter-attack in the first half, before Romelu Lukaku levelled and substitute Lingard completed the turnaround in the 75th minute. 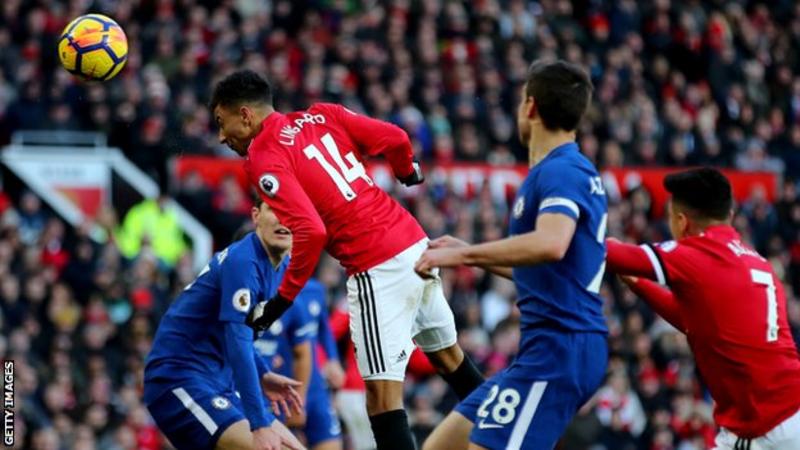 The result saw United re-establish our six point lead over Antonio Conte's side, and also saw us leapfrog back above Liverpool who had briefly moved second after their 4-1 win against West Ham on Saturday. It was Chelsea who started brightly, however, as they stroked the ball around with ease and pinned United back, with the Reds forced on to the back foot in the early exchanges. The visitors almost went ahead inside five minutes when Marcos Alonso picked out the returning Alvaro Morata, who volleyed against the bar, before David de Gea saved superbly from Eden Hazard on the rebound.

Just when it looked as though the Reds had started to find a foothold, Chelsea showed their quality with a wonderful counter-attacking goal. It came from the edge of our own box when Willian collected the ball and surged forward. The brilliant Brazilian played a neat one-two with Hazard, raced onto the Belgian's return pass and slotted the ball beyond De Gea - who probably could have done better at his near post - for his fourth goal in three games.

United found clear cut chances hard to come by but continued to persevere and we got our rewards five minutes shy of the interval. Lukaku's persistence paid off as his hold up play released Nemanja Matic, whom in turn slipped the ball to Alexis Sanchez. The ball was moved on to Lukaku via Anthony Martial and the Belgian made no mistake against his former side, with an unerring finish beyond Thibaut Courtois for his 22nd goal of the season.
Despite the boost of the leveller, the second half continued in a similar manner as Chelsea looked the more likely. Morata had an effort blocked after another surging run by Willian, and then there were hearts in mouths when De Gea uncharacteristically spilt Danny Drinkwater's drive from distance, but United recovered to clear.

Lukaku then almost put United ahead in spectacular fashion on 67 minutes, when his acrobatic scissor-kick volley was tipped over the top by Courtois. Jose introduced Lingard in place of the largely peripheral Martial, and the change reaped dividends when Lukaku - magnificent throughout - picked out the onrushing sub who ghosted in unmarked to steer home his header from close range with 15 minutes to go.

Morata had a goal chalked out for offside as Chelsea hunted an equaliser but the Reds held out despite four added minutes to complete a superb comeback win.

Overall team performance: 7/10
United Faithful Man of the Match:  Honourable mentions to Messrs Matic and McTominay, but we've got to give this to Romelu Lukaku. Scored one, set up the winner and proved a constant menace throughout in probably his best game in United Red. Immense.

Posted by United Faithful at 14:14