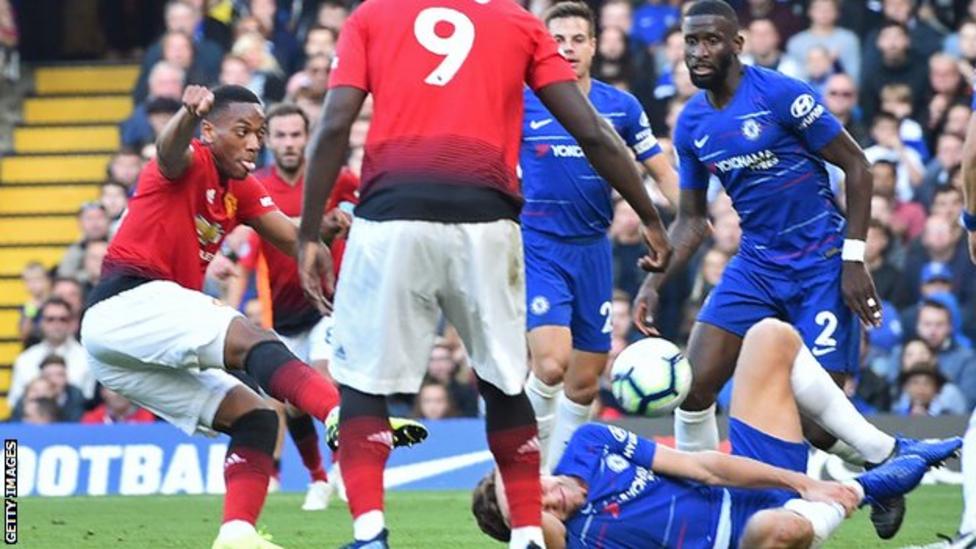 A 96th minute equaliser from substitute Ross Barkley salvaged a late, late point for Maurizio Sarri's side to preserve their unbeaten run and cruelly deny United a first Stamford Bridge win for six years.
Barkley bundled home an untidy leveller at the culmination of a frantic passage of play, after David Luiz had struck the post with a header and David de Gea saved superbly on the rebound from Rudiger, whom had earlier put the hosts in front and threatened to extend the Reds woeful record in west London. In truth, a draw was probably a fair result over the 90+ minutes but the result is a tough one to take for Jose Mourinho's United, coming so late as it did after Anthony Martial had flipped the match on it head with two superbly-taken second half goals.

In a thrilling, action packed and end-to-end encounter, Barkley's goal was greeted by ugly scenes as Chelsea assistant Marco Ianni celebrated in front of him before then pumping his fists in Mourinho's direction again.

The Portuguese jumped from his seat and was then held back by a mixture of stewards and United staff as he attempted to get down the tunnel at Ianni.
The Blues looked in control when Rudiger took advantage of Paul Pogba's poor marking to head home Willian's corner on 20 minutes, but United responded superbly after the break and Martial's double - a smart, swivelling finish and a composed, low effort - put the visitors on the brink of three points until that frantic finale. United had lost on eight of the last nine visits to the Bridge, and rarely looked like improving on that record during a first half in which Sarri's side underlined their title credentials. Coming into the game level on points with Liverpool and City, Chelsea started strongly and went close time early on through a Willian free-kick and Jorginho, who slammed a shot wide from distance.

Romelu Lukaku was unable to steer a header on target, but it was a header at the other end that saw Chelsea move ahead through Rudiger, who planted the ball beyond De Gea having been left unmarked. De Gea saved well from Morata, before he was called into action again to keep out Eden Hazard from distance.
Then came the equaliser on 55 minutes as Lukaku and Pogba linked up to play in Mata, his shot was parried by Kepa but the ball was recycled to Martial via Ashley Young, and the former smashed in emphatically via a deflection off Jorginho. United's tails were up but Chelsea went close again when David Luiz headed narrowly wide from another set-piece. De Gea then saved superbly from the always impressive N'golo Kante, but the Reds were in control with Pogba pulling the strings and Mata - in his favoured number 10 role - a constant menace.

The little magician was involved again as the Reds stunned Stamford Bridge and took the lead with 17 minutes to play. Mata skipped clear of Luiz and found Marcus Rashford, whom in turn picked out the onrushing Martial who cut inside and curled a brilliant finish beyond the despairing Kepa for his third goal in two
games.

Despite the late equaliser, United will take much confidence and belief from another immense second half performance, away from home against a very very good side, with Ronnie and co's Juventus next up on Tuesday.