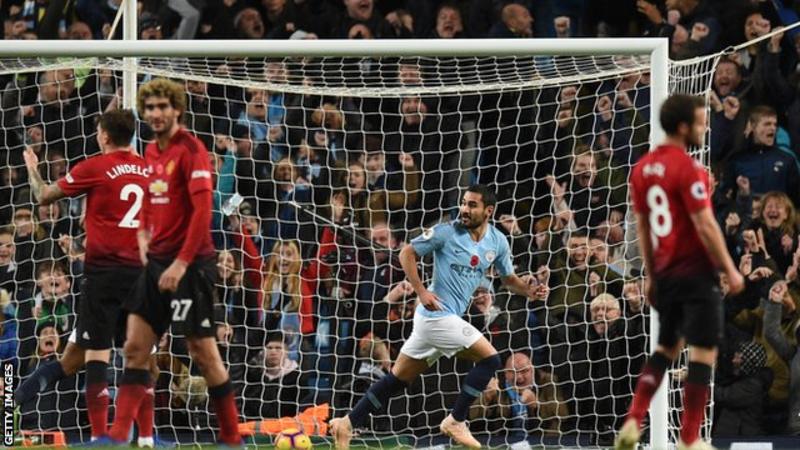 Pep Guardiola's City offered up a chastening reminder of the gaping chasm in class as, despite briefly threatening another famous comeback, United were second best in the derby.
The champions replaced Liverpool at the summit of the Premier League and, on this evidence, City's rampant team of slickers will take some stopping as they bid to defend a title for the first time.

Last term's corresponding fixture was a memorable one for the Reds as we improbably stormed back from 0-2 down to win 3-2 and - with Paul Pogba pulling the strings - ruin the hosts title party in front of a disbelieving Etihad.
This time, Pogba was forced into a watching brief with United's midfield three - the incompatible trio of Marouane Fellaini, Nemanja Matic and Ander Herrera - given the job of stifling their opposite numbers, undoubtedly the best pound for pound passers anywhere.
After a poignant Remebrance Sunday tribute, it took only twelve minutes for City to open the scoring. A whipped cross from Raheem Sterling picked out Bernardo Silva at the back post, and he rolled the ball back to his namesake David, who took a touch and rifled in an unerring finish.
Herrera blocked well from Sterling on the stretch, but the Blues fleet of foot and sharpness of mind proved very difficult to deal with. Sergio Aguero - so often the scourge of Manchester United - fired into the side netting and Chris Smalling headed over at the other end.

The Reds have made a habit of going into half-time behind, but our hopes of mounting another climb off the canvas victory were hit harder - if not quite completely extinguished - three minutes after the break. City's all time top scorer and his strange new haircut punished United from our free-kick as the diminutive Argentine pounced on a Jesse Lingard loose ball and surged forwards. He exchanged passes with Riyad Mahrez and thumped beyond a stranded David de Gea into the roof of the net from a tight angle.
Sterling went close again before Jose Mourinho turned to returning Belgian Romelu Lukaku just before the hour mark in at attempt to stem the City tide. It worked a treat straightaway, as Anthony Martial picked out Lukaku, and the onrushing Ederson scythed down the striker. Martial continued his fine recent run in front of goal as he converted the resultant spot kick to halve the deficit and spark home of another rescue mission. It was the Frenchman's seventh goal of an impressive season.

Fernandinho stung the palms of De Gea before Juan Mata - who scored the vital equaliser in Turin - entered the fray along with Alexis Sanchez. Martial flashed an effort off target but that was as good as it got for United.

There was to be no famous comeback this time, though, as City substitute Ilkay Gundogan added a third from close range with five minutes to play.

Overall team performance: 6/10. City were too good but the players gave everything and never gave up.
United Faithful Man of the Match: Marouane Fellaini