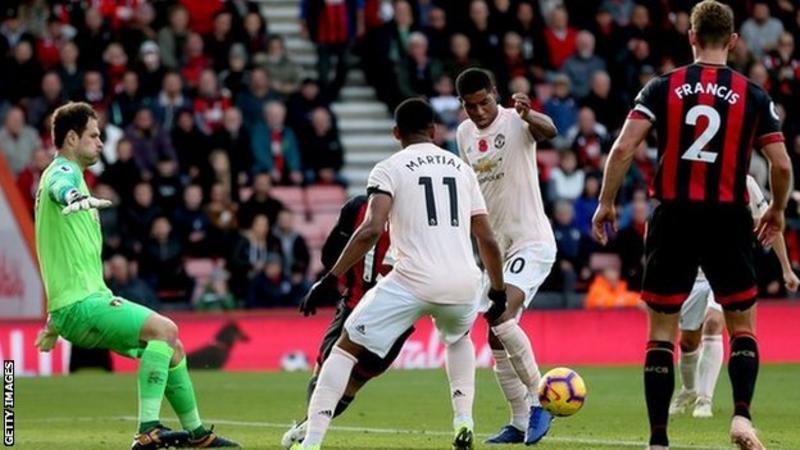 Marcus Rashford scored deep into injury time as United staged another dramatic comeback and completed back to back wins for the second time this season.
Callum Wilson punctured United's porous and shoddy defence after eleven minutes during a first half in which the Reds, once again, were off the pace, sluggish and second best. Anthony Martial's fith goal in four games restored parity and that paved the way for substitute Rashford to nick the winner in the 92nd minute when he scored on the rebound from a Paul Pogba cross.

Ahead of kick-off, the stadium fell silent out of respect for the victims of last week’s helicopter crash at Leicester City, and The Last Post was played to mark Bournemouth’s closest home match before Remembrance Sunday. Following this sombre period of reflection by both sets of fans, the crowd roared into life as the contest commenced.

Eddie Howe's high flying Cherries started the day in sixth, three points above United, and carved out three clear chances in the opening ten minutes. David de Gea saved well from Bournemouth's lively winger Ryan Fraser before he was called into action again to keep out Wilson. Junior Stanislas had an effort deflected wide, but the hosts weren't to be denied for long as Wilson this time took his next opening emphatically. The resultant corner was only half-cleared, Stanislas whipped the ball back in and his cross was met by the lurking, in-form Wilson who knocked in his sixth of the season from close range.

United found themselves under siege as Bournemouth - scenting only a second ever win over us - went close again through Adam Smith,  and referee Paul Tierney then waved away their shouts for a spot kick when David Brooks went down under a challenge from Luke Shaw.

The Reds grew into the game and were level ten minutes further on, when Martial continued his unstoppable scoring streak. The Frenchman's run was picked out by the returning Alexis Sanchez, and - unmarked in the area - he fired in a finish beyond the wrong footed Asmir Begovic on 35 minutes.

As is so often this side's wont, the Reds found another gear after the interval, with Martial instrumental and leading the charge. Begovic cleared well under pressure before Sanchez and Shaw were both denied in quick succession by smart stops from the increasingly busy Cherries keeper.

The Reds barrage continued as Ashley Young rattled the crossbar from a free-kick, Rashford was thwarted by a lunging Nathan Ake and Pogba's snapshot was hacked off the line by Brooks.
Begovic saved from Ake's inadvertent miscue before Bournemouth sprung forward at the other end, only for De Gea to save well from Brooks when one on one.

With four minutes added on, the match could still have gone either way and it was to be United’s victory as Pogba crossed low and hard from the left and Rashford kept his composure when the ball bounced up inside the six-yard box to bury it in the net and send the travelling fans wild.

Posted by United Faithful at 12:33