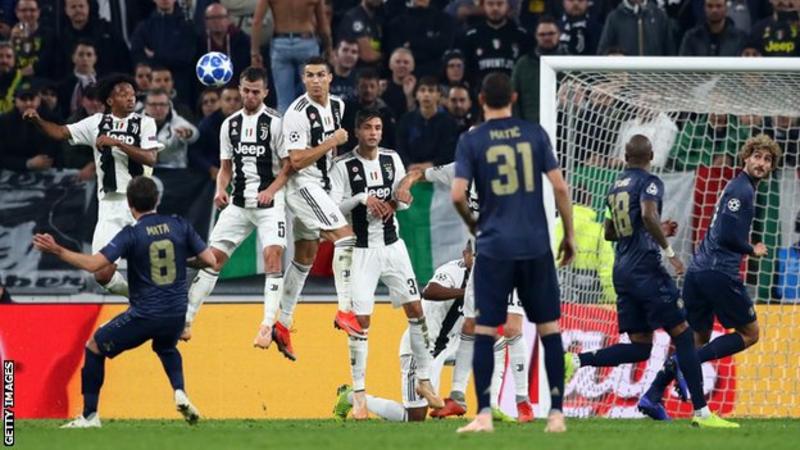 Another stunning late smash and grab raid saw United turn a potentially damaging defeat into a hugely improbable victory.
Trailing through a goal of the season contender from former Red Cristiano Ronaldo, United sent on Juan Mata and Marouane Fellaini and both men proved pivotal as Mata's free-kick levelled the tie before Fellaini caused chaos from Ashley Young's free kick which found its way in off Alex Sandro for an incredible win.
Once again the Reds made a habit of climbing off the canvas to turn a tie that had looked lost on its head and move two points clear of third place Valencia into a strong position to qualify from Group H.

Unbeaten in 19 games in all competitions, and having suffered only one defeat in 36 Champions League home group stage games, Juventus - yet to concede a goal in this season's tournament before Mata's strike - had outclassed United in the reverse fixture at Old Trafford and few would have bet against a repeat.

Max Allegri's seven time defending Serie A champions had rattled the woodwork either side of half time, as Sami Khedira struck a post and Paulo Dybala curled an effort off the bar. David de Gea had earlier saved superbly from Juan Cuadrado and Juventus twice went close through Miralem Pjanic before Ronaldo's stunning over-the-shoulder volley from Leonardo Bonucci's long ball forward.

United were compact and resolute but struggled to create anything clear cut.  A dinked through ball from Nemanja Matic to Alexis - from which the Chilean was narrowly unable to turn home - was the main highlight.
Wojciech Szczsny was then called into action shortly before half-time when Paul Pogba curled an effort towards goal, but the keeper gathered with ease.
Pogba had been laboured in the first half, but after the interval he was involved in the Reds best move of the game. He flicked the ball on to Luke Shaw, who controlled and let the ball run into the path of in-form Anthony Martial, but the forward was unable to get his effort on target.

Ronaldo's sensational volley broke the deadlock on 65 minutes, and he almost set up a second soon after when he laid a pass off to Pjanic, but De Gea reacted well to save.
Cuadrado went close from distance, before Mourinho's double change - Mata and Fellaini in place of Ander Herrera and Jesse Lingard - and it took only seven minutes for the former to make an impact. Just as he did against Newcastle, Mata curled home a superb 20 yard set piece after fellow substitute Blaise Matuidi had scythed down Martial.
That looked to have salvaged an unlikely point, but - gloriously - things got even better when another free-kick, this time from Young, bounced in off a despairing combination of Bonucci and Sandro.


Substitute Marcus Rashford could even have added a third on the break during injury time, but for Szczesny's desperate low save, and the home crowd could barely believe the late turnaround. The final whistle sparked memories of ’99 when the Reds so famously came from behind to win on the way to the Treble. It may still be early days in this season's Champions League, but this result sees the Reds march on, and how.

Overall team performance: 8/10. Immense all round
United Faithful Man of the Match: Victor Lindelof. Excellent again just as he was in the first game.