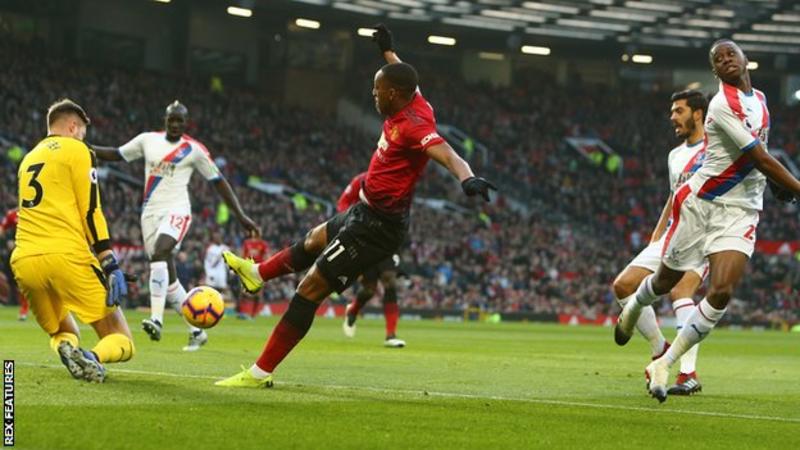 United failed to win at Old Trafford for the sixth time this season as despite late pressure the team were unable to break down Roy Hodgson's resilent and well organised Crystal Palace side.

Romelu Lukaku had an effort ruled out for offside - as did Cheikou Kouyate - in a game that only livened up late on as the Reds applied late pressure that ultimately proved in vain.
Wayne Hennessey saved well from Jesse Lingard and Lukaku but the visitors had several chances of their own to piler a first win at Old Trafford during the Premier League era.

Patrick van Aanholt twice went close, Andros Townsend slotted wide when well placed and only David de Gea's smart double save after half-time preserved a second clean sheet of the season.
This is now United's worst start to the season in 29 years - seventh in the league with 21 points out of a possible 39 and negative goal difference. Add to that the unpalatable Carabao Cup KO at the hands of Championship Derby County, and several not-good-enough players in contract talks, and it's fair to say that Manchester United are a complete mess.

Palace had lost on their past 11 league visits to Old Trafford and arrived at the venue flirting with relegation after seven top-flight matches without a win. Former United man Wilfried Zaha is the most dangerous and creative outlet, and it was he who was involved as they carved out the first big chance on 20 minutes.

He zipped a shot just wide and was part of a rapid breakaway five minutes on that caught United cold. Only a miscued shot from Patrick van Aanholt saved the Reds from going behind. Jesse Lingard was United's most threatening player for spells and he forced Hennessey into his first action of the encounter with a first time snap shot from close range. He teed up Anthony Martial - on the lookout for six goals in as many games - but the Eagles keeper was there again to block.


There was an almighty scare for United two minutes before half-time when it looked in real time like Palace had taken a shock lead. Kouyate and Victor Lindelof both appeared to get a glance on Milivojevic’s free kick but, as the Palace player ran away celebrating, he was confronted by the referee’s assistant flagging for offside.
It was a very close call and could have gone either way.

History was to repeat itself just shy of the hour mark as this time the Reds had a strike chalked off in front of the Stretford End.
Ashley Young's dipping effort from distance was parried out by Hennesey, Lukaku reacted to follow up and tap home, but the Belgian striker was judged to be marginally offside.

Andros Townsend squirted a one on one opening wide, before Lukaku went close with a header at the other end. The Reds launched a late rally in search of a trademark winner at the death, but Palace deservedly held firm to ensure the points were shared.

Posted by United Faithful at 10:24