Marouane Fellaini's late, late winner lifted United from their slumber and, kicking and screaming, sealed qualification for the last 16 of the Champions League.
The Reds had looked on course for a terse, decisive winner-takes all- showdown at the Mestalla on Matchday Six after another insiped showing against the spirited but limited opposition of rank Swiss outsiders Young Boys.
But Jose Mourinho's go-to man rode to the rescue again as substitute Romelu Lukaku flicked on Luke Shaw's diagonal pass and Fellaini slammed home on the turn in the 91st minute - the Reds goal in Europe at Old Trafford all season proved a very important one. The goal brought a delirious reaction from United boss Mourinho, who flung a basket full of water bottles to the floor in celebration. 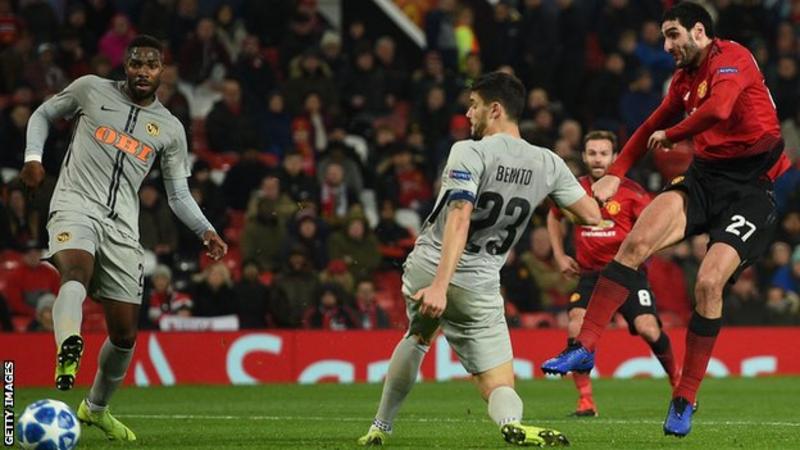 The result sends the Reds - just - squeaking into February's knockout stages with a game to spare and ensures that Gerardo Seoane's side are eliminated from European football completely, meaning that Los Che go into the Europa League after losing 1-0 at Juventus.
United had 21 shots on goal and actually started brightly, only to squander every clear cut chance that fell our way, with Marcus Rashford the biggest culprit.

The young striker set the tone for the evening, when he burst clear one on one but put the ball wastefully wide with the goal at his mercy. The Reds were to see more golden opportunities go begging, as the luckless Rashford slipped in front of goal and Fellaini hooked over the bar from four yards.

The returning Fred, bright and busy on his recall, flashed a shot wide and Rashford's effort from distance flew narrowly off target as, despite looking the more likely, United were unable to trouble the wonderfully named David von Balmoos in the visitors goal.

David de Gea had been a virtual spectator up until the hour mark, but as we have been on so many occasions, proved indebted to the gravity-defying heroics of the Spaniard. De Gea has had his critics this season but underlined why he remains the best in the business with a scarcely believable stop.
Big Dave tipped a Jean - Pierre Nsame effort over the top but even better was to follow from the resultant corner when Michael Aebischer's deflected shot looked to have found its way in, only for a sprawling De Gea to lunge across and somehow claw the ball away from danger.

Lukaku, who had earlier come on for Jesse Lingard, headed wide and fellow sub Paul Pogba volleyed over the bar as the Reds belatedly applied late pressure in the closing stages. That said, there still appeared a lack of urgency and it seemed as though United's trip to the Mestalla in a fortnight would be decisive.

That was until Fellaini's dramatic intervention not only sent United through, but also maintained slim hopes of winning the section. Not pretty and damn ugly, but bring on the knockouts!