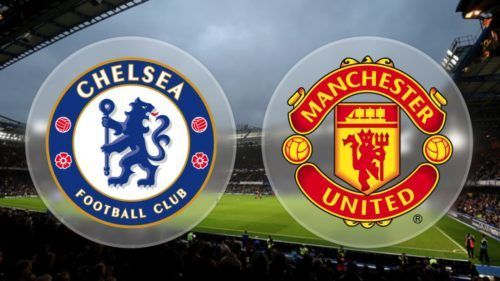 Football, they say, is cyclical, so perhaps it should be no surprise that Chelsea and Manchester United meet in a repeat of last season's FA Cup final.
From Stamford Bridge to Old Trafford - via Wembley and Moscow - this is English football's most played fixture of recent times. The two sides lock horns for the fifth time in six years in the stadnout tie of the fifth round with the Cup the most open it's been for years. Chelsea have won 1-0 on the last three occasions, following a 2-2 draw at Old Trafford in 2013, and are looking to reach their third consecutive final.

Chelsea, of course, won last season's final and the Blues haven't been knocked out of a domestic cup competition by Manchester United since 2002.
Back then Ole Gunnar Solskjaer still had a big chunk of his playing career ahead of him, and Maurizio Sarri had not long given up banking to concentrate on coaching Sansovino in Italy's fourth tier.
As the two men shake hands at Stamford Bridge, one could be wondering what will happen to him at the season's end - and the other pondering whether he will even last that long.

Chelsea made a superb start to the season and looked set to challenge Manchester City and Liverpool as they were unbeaten until November. But form has plateaud badly, United have leapfrogged the Blues into the top four and Sarri's side come into this one off the back of a record 6-0 defeat at the Etihad last weekend. Chelsea may be struggling for consistency, but you can be sure that Solskjaer's Reds will be in for another tough examination of credentials at a ground where we have not won since 2012 - Stamford Bridge is United's unhappiest hunting ground of them all. There are three things certain in life: death, taxes and defeat at Chelsea.
That said, it took a late, late leveller from Ross Barkley to maintain the Blues stranglehold over United back in October after United had threatened a come-from-behind win through a brilliant Anthony Martial brace.

Speaking of Martial... United have been dealt a cruel double injury blow with the Frenchman and Jesse Lingard ruled out for up to three weeks with respective groin and hamstring injuries. Full-backs Antonio Valencia and Matteo Darmian remain sidelined, but opportunity may knock for Academy products Tahith Chong and Angel Gomes. Marcos Rojo could also be in line to return with the Argentine not having featured at all this season. Lingard and Martial have become key components of United's revival under Ole, so their absences come as a major setback. The pair will miss this tie, and Premier League matches against Liverpool, Crystal Palace and Southampton.

Holders Chelsea will assess the fitness of several unnamed players ahead of Monday night's tie.
Ruben Loftus-Cheek's ongoing back problem kept him out against Malmo in the Europa League, while Marcos Alonso was rested for that game - both could return.

Solskjaer said: " You have to bounce back at this club. You'll always have challenges, and away against Chelsea is one of the tougher challenges.
"We know there was a spell against PSG - seven, eight, nine or 10 minutes - where we lost our way a bit. But apart from that, we weren't too bad defensively.
"We need to keep working on the way we want to play football - the way we approach the games will always be in an attacking, positive mind."

Posted by United Faithful at 02:53