Man Utd made light of our crippling injury crisis to move to within five points of third-placed Tottenham in the congested battle for the Champions League. 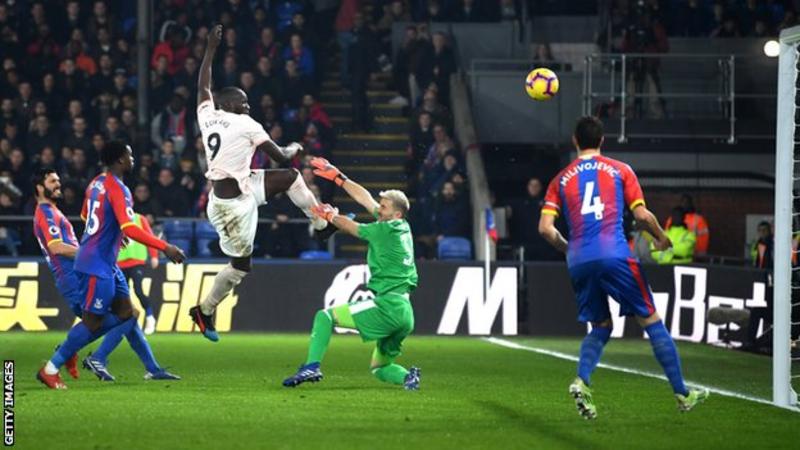 Despite a makeshift line-up and missing ten senior players, United ground out an eighth successive win away from home - the first time in the club's history we have achieved such a feat. Romelu Lukaku scored twice either side of half-time to move into double figures for the season and, although Joel Ward pulled a goal back, Ashley Young's late third sealed another win.

United are fifth, one point behind place above Arsenal and five off faltering Tottenham, with ten games left to play in what looks set to be a frantic fight to the finish.

Ole Gunnar Solskjaer was forced to make three changes to the side that drew 0-0 with Liverpool on Sunday. Fred, Diogo Dalot and Alexis Sanchez came in for injured trio Ander Herrera, Juan Mata and Marcus Rashford, though the latter recovered enough for a place on the bench.
Lukaku was lively throughout and the first chance of the match fell his way inside ten minutes when he volleyed over the bar having drifted away from his marker.
Andros Townsend flashed a shot wide and James McArthur tried his luck from distance before the Reds took the lead shortly after the half hour.

Luke Shaw was again the provider, as he skipped past a back-pedalling Townsend and into the box. The left-back laid the ball off to Lukaku, who took a touch and then rifled a curler beyond the helpless dive of Palace stopper Vicente Guaita.
The pace and trickery of Townsend - who has a penchant for the spectacular - proved Palace's biggest asset and he went close again as he fired narrowly wide from distance after Jeffrey Schlupp had cut the ball back.

Paul Pogba headed over from a Diogo Dalot delivery, but it wasn't long before the Reds, and Lukaku, had our second. Palace failed to clear their lines from a corner, with Chris Smalling and Victor Lindelof getting to the ball ahead of their opposite numbers. Lindelof's header dropped to Lukaku, who spun and fired in a finish over Guaita.


As the hosts found to their cost last year, 2-0 can be a dangerous scoreline and, this time, it was United who were made to sweat. Ward’s diving header at the back post from Schlupp’s dangerous cross gave Roy Hodgson’s side hope on 65 minutes and it was Palace who looked the more likely to score again in the following ten minutes.
De Gea saved well from Max Meyer and Luka Milivojevic fired into the side-netting from a set piece.


However, Young made sure of the three points in the 83rd minute. Lovely interplay between Pogba and Lukaku on the edge of the area allowed Pogba time to slot a ball through to Young, and the captain drilled a low effort across goal, with Ward unable to keep it out on the line.
James Garner came on as a late substitute to make his senior debut and this will be a special night for the 17-year-old midfielder, and the travelling fans who - as ever - made themselves heard throughout in the capital.

A special mention once again to United's travelling Red Army. They never stopped singing throughout, helped the boys home and are, quite simply, the best away fans in the country.

Posted by United Faithful at 05:14