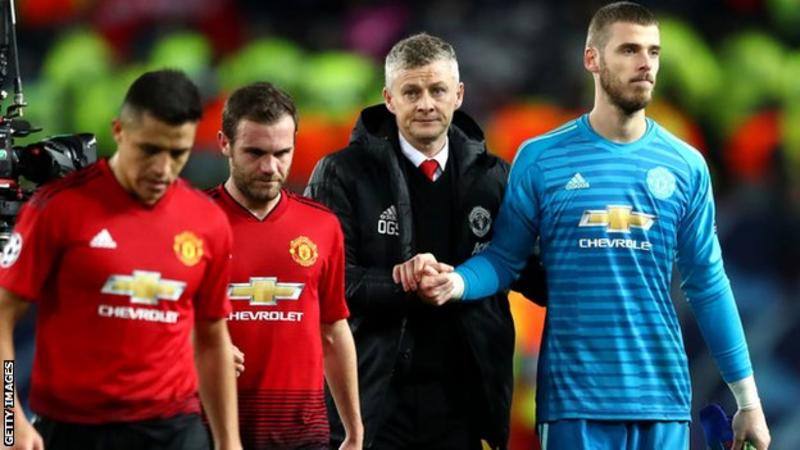 PSG overpowered United and took control of the last 16 tie as Ole Gunnar Solskjaer suffered his first defeat as caretaker boss.
It was to Solskjaer's credit that there was an air of optimism - even genuine belief - before the game but, despite a creditable first half showing, the loss of Jesse Lingard and Anthony Martial through injury proved costly.
Presnel Kimpembe could count himself fortunate to stay on the field but put Thomas Tuchel's side ahead before Kylian Mbappe wrapped up the victory. To quite literally add insult to United's injury, a difficult task was rendered virtually impossible when Paul Pogba was sent off in the closing stages.

Former Manchester United misfit Angel di Maria unpalatably proved tormentor in chief, his 53rd minute corner allowing Kimpembe, arguably fortunate to still be on the pitch, to escape the attentions of Nemanja Matic and sidefoot past David de Gea.
And it was fitting that the brilliant Mbappe, whose searing pace was a threat all night, enhanced PSG's position of superiority when he turned Di Maria's inviting cross past the exposed De Gea on the hour.
If United's plight was not bad enough already, it was made worse when Pogba was sent off for a second yellow card in the final minute of normal time and will miss the second leg.

United were unable to find any of the magic that has been sprinkled on them by Solskjaer in his opening 11 matches, which brought 10 wins and one draw. Europe was another level and PSG showed why they are among the favourites to go all the way to the final in Madrid in May.
Di Maria - jeered constantly throughout - instantly looked the Parisians main threat as he flashed an early sight wide from distance. Marcus Rashford forced a save from veteran stopper Gianluigi Buffon, before the Reds squandered a three on one opening when Lingard found Martial on the counter. But the Frenchman hesitated, the ball rolled behind him and the chance had gone.

United had kept PSG's danger man Kylian Mbappe at arm's length, but he burst into life shortly before the half hour mark. After a slick, flowing move, Mbappe stormed clear and rounded De Gea but could only find the side netting. Di Maria was then denied by De Gea, but was flagged for offside.

The first half was littered with yellow cards and the evening got tasty when Ashley Young shoulder-charged Di Maria off the pitch and into a metal barrier, to the delight of the baying Old Trafford crowd.

United then lost Lingard and Martial - replaced by Alexis Sanchez and Juan Mata - respectively and were forced into a tactical reshuffle after the interval.
PSG began the second half in full flow and were ominously getting into their dangerous stride. The movement and agility of Tuchel's team were another level, and they inflicted the first blow eight minutes into the half. De Gea pushed Mbappe's effort away for a corner but - from Di Maria's resultant flag-kick - Kimpembe capitalised on United's flat footed rearguard to thump home a volley.
The Frenchman was lucky to still be on the pitch to score it, having somehow avoided a second booking when he had scythed down Marcus Rashford moments earlier.

Dani Alves went close from distance and De Gea saved well from Julian Draxler, but a stunned United side hit back through Ander Herrera, who fired wide of Buffon's post with a 20 yarder.

However, Solskjaer’s men just couldn’t cope as PSG began to fluently attack at pace. The classy French outfit made it 2-0 on the hour as they broke at speed and Thilo Kehrer sent a ball away down the left to Di Maria. The Argentine snaked away and drilled over a perfect low cross for Mbappe to sneak in between Eric Bailly and Victor Lindelof and steer the ball in.

PSG were rampant now as United simply couldn't contain the talented Parisians, even without two of their biggest hitters. 20-year-old wonderboy Mbappe had come to the party and almost got his second of the game, only for De Gea to keep out his lob with a smart reaction stop.


PSG eased off after the sucker punch that devastated United but even then the Reds were so rattled by the killer period that we couldn’t rally and grab a goal that might have given us more of a fighting chance in Paris.
But the Reds couldn’t muster up an opportunity to trouble Buffon, who was largely untested throughout in the visiting goal.
It got worse for United as they will be without Pogba for the second leg in France. The French midfielder had been yellow carded in the 25th minute and then clattered into Alves in the 89th minute. Italian referee Daniele Orsato consulted VAR before handing out another booking and then showing Pogba a red.