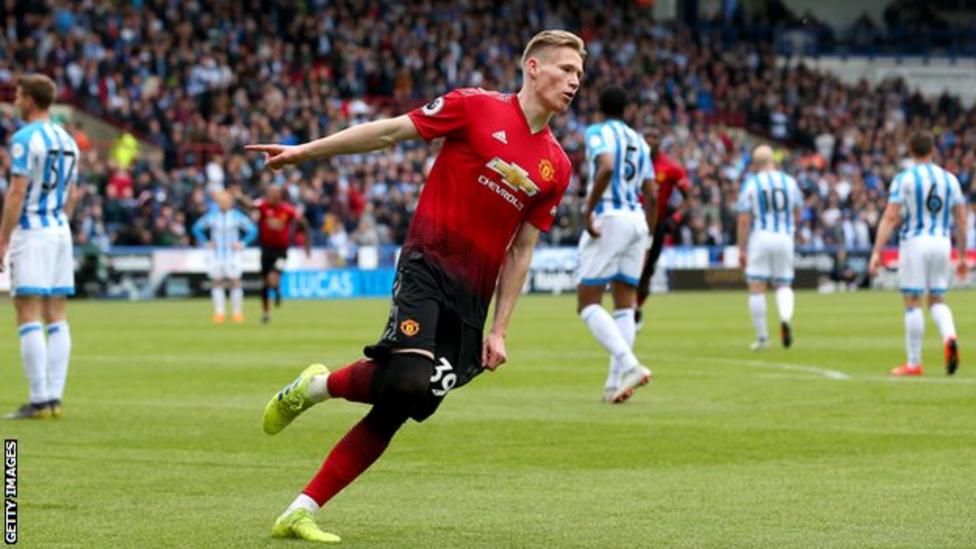 This pitiful bunch of Man Utd players were finally put out of their misery as our top four hopes were ended by one of the worst sides the Premier League has seen. It was only the Championship-bound Terriers 15th point of a woeful season, and mathematically ended United's already slim hopes of Champions League football in 2019-20, not that we deserve it anyway. In truth, the top four was not ended today - we have been utterly pathetic all season bar the three magic months when everything Ole Gunnar Solskjaer touched turned to gold. Spurs, Chelsea and Arsenal have barely been no better but with nothing to play for against Cardiff with one game left, I want to see youth now. Scott McTominay, the one shining light in a desperately dark season of gloom, was the only man in Red worthy of the name.

Jan Siewert's Huddersfield were relegated in March - the joint earliest demotion ever -  and on a run of eight successive losses, but with the club destined for the drop after a two-season stint at the top level, and chairman Dean Hoyle going with them, there was an emotional backdrop at the atmospheric John Smith's Stadium. Hoyle is selling the club to local businessman and another long-standing supporter in Phil Hodgkinson.

McTominay put United ahead when he fired in from the edge of the box beyond Jonas Lossl, but Isaac Mbenza's first goal for the club restored parity after the interval. In a frantic finish, young United substitute Tahith Chong had a shot saved and Paul Pogba hit the bar before David de Gea denied Karlan Grant a winner at the other end.

De Gea, under scrutiny after a string of disappointing mistakes, twice saved well from Grant, whilst Juan Mata was by far United's most creative player and almost set up an opportunity for Pogba to double United's lead.
Pogba hit the bar in each half with curling shots but he was another highly-paid member of the United squad whose overall impact failed to match his reputation.

Home-grown McTominay, United's April player of the month, was again the visitors' outstanding performer.
There was more than an element of luck about the Scotland midfielder's goal as Huddersfield keeper  Lossl completely failed to deal with his eighth-minute shot from just inside the penalty area but there was an enterprising industry about McTominay's performance that his team-mates clearly lacked.

Hoyle even got something to celebrate as Mbenza scored his first goal in 23 Huddersfield appearances.
There was nothing subtle about his debut goal. The Terriers keeper punted the ball downfield, it was was not dealt with by Luke Shaw, allowing Mbenza to run clear of the United defence and slot past the advancing de Gea.

Phil Jones headed over from five yards having been picked out by Mata, and Marcus Rashford then also should have done better but miscued when well placed, epitomising his recent struggles.

Posted by United Faithful at 15:31