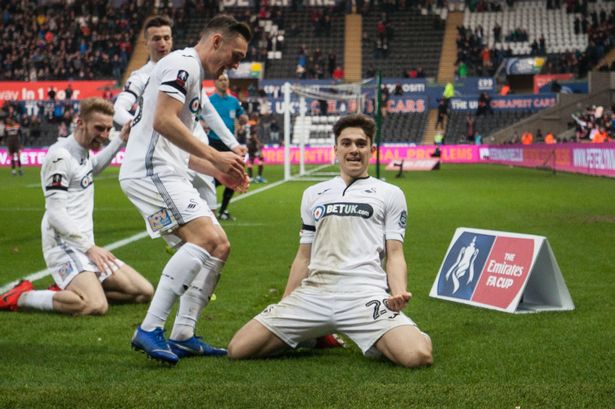 Man Utd have agreed a deal in principle to bring Swansea's wing wizard Daniel James to Old Trafford.
Touted as one of the most exciting and highly rated young talents in the British game, James has emerged into the national spotlight after an impressively eye-catching campaign last time out. Having risen through the ranks of the Swans academy to earn what he has described as a "dream" move, the 21 year old will become Ole Gunnar Solskjaer's first signing of the summer - and as United boss. He almost joined Leeds in January but a deal could not be reached, so he's seen the light and joined the only United worthy of the name.

The move hints at Ole's preferred transfer strategy, with a string of big-name, high profile "X Factor" signings - Bastian Schweinsteiger, Memphis Depay, Angel Di Maria and Radamel Falcao to name but four - having fallen flat. The focus now appears to have switched to young, exciting, hungry British player in lieu of expensive overseas imports. James is, hopefully, the first of many to fall into that category. I'm excited to see what he will bring to a United squad in urgent need of re-inforcements. He can play on either flank or as a number ten from attacking midfield. He's a brilliant young player who will play, fight and give his all for the badge - someone who actually wants to be at the club rather than only an overinflated pay cheque. Exactly the sort of player in our side conspicous by his absence.

Twice capped by Ryan Giggs at full international level for Wales, James has completed his medical at Carrington ahead of a proposed £18 move, after add ons
The deal is expected to go through when Fifa's international transfer window opens next week. He scored the only goal in a 1-0 win over Slovakia on his full international debut in March.

Known for his blistering pace and intricate trickery, James claimed nine assists and scored five times in the Championship during his breakthrough 2018-19 season. Manchester City boss Pep Guardiola noted how "incredibly fast" James is after his side were given an FA Cup quarter-final fright at Swansea in March - it was that game that reportedly swayed United to move for the Welsh talent.


The winger has impressed this season at Swansea, showing electric pace and a willingness to fearlessly take on defenders, an asset that has clearly impressed Solskjaer.
This is the sort of signing United should be getting over the line. James is not a ready-made star, but is an exciting prospect and was bought at a very affordable price. United fans will be hoping to see several more new arrivals before the summer window shuts with a huge overhaul still required.