Manchester United stunned Pep Guardiola's faltering City and re-invigorated our own top four challenge with a thrilling and fully deserved victory in the 179th Manchester derby. 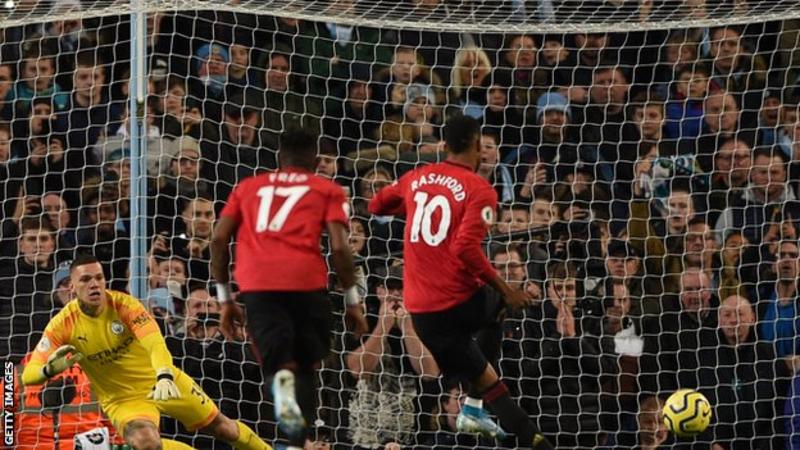 Marcus Rashford continued his red hot run of form with a VAR-assisted penalty and the returning Anthony Martial made it 2-0 with a superb second six minutes further on. City looked devoid of ideas for long periods but fought their way back and set up a frantic finale through substitute Nicolas Otamendi's header. Despite coming under siege in the final moments, the Reds heroically stood strong to secure the biggest win of Ole Gunnar Solskjaer's permanent tenure at the club in his 50th match in charge.

United and manager Solskjaer have justifiably had their critics this season but, to a man, every player was absolutely immense. In truth the scoreline proved a flattering one for the hosts with a glut of chances falling our way with United a threat every time we went forward.
The result saw City slip 14 points behind Liverpool and their hopes of a third successive title - if not quite yet in the dust - are now hanging by a thread. Their air of invincibility has slipped and United's penchant for defying the odds was once again in evidence at the Etihad.

The Reds set the tone for what was to follow with a blistering start that could have yielded two goals in the first ten minutes. Springing clear on the counter, Jesse Lingard found Dan James and his effort was beaten away by Ederson. The City keeper was by far the busier and came to his side's rescue once more to deny first Lingard and then Rashford.

Rashford's clever lob came back off the bar and Martial flashed a shot wide as incredibly, Guardiola's side were left chasing shadows and struggling to get a foothold in the game. United were bristling with intent and got our rewards in the 23rd minute when Rashford burst clear but was clumsily bundled over by Bernardo Silva. Referee Anthony Taylor initially waved play on, but overturned his decision on the advice of VAR and Rashford sent Ederson the wrong way from the spot for his 13th goal of an impressive season.
With City still reeling from the shock, United set about causing more problems for their hosts and duly obliged on the half hour mark when James picked out Martial and he had time and space to squeeze his shot inside Ederson's near post.

City finally managed to get a grip of things after that, especially in midfield, although the damage was done and the stuffing simply knocked out of them. They had a penalty appeal turned down for handball against a lunging Fred shortly before half time, and Gabriel Jesus headed wastefully wide from a Kevin de Bruyne cross.

Raheem Sterling - marshalled superbly by the magnificent Aaron Wan - Bissaka throughout, barely got a sniff and blazed wildly off target when a rare opportunity did fall his way.
It was testament to United's heroic defensive efforts that, for all their possession and territory, City were unable to apply any serious pressure on David de Gea.
In fact, we went close to making it 3-0 when Ederson tipped wide from Lingard after another lightning break.

Otamendi's header five minutes from time - when he thumped in a header unmarked - set up a harum scarum finish as City came again and laid siege to the United goal. De Gea saved brilliantly from substitute Riyad Mahrez with his foot, Victor Lindelof thwarted Kevin de Bruyne and Jesus flashed a shot across the face of goal in the first of five added minutes.

United held out for two huge back to back wins to end an important week in glorious Manchester United fashion. UTFR!!

The game was marred by allegations of racist abuse towards Lingard, Rashford and Fred in the second half, while the latter was also twice hit by an object thrown at him from the stands.

Overall team performance: 9/10. Every player absolutely immense, to a man and from front to back.
United Faithful Man of the Match: We could give this to the entire team, we were that good. With honourable mentions to Fred, Rashford and Victor Lindelof, it just has to be Aaron Wan - Bissaka. Simply magnificent. He had the game of his life on his Manchester derby debut. Colossal.