Struggling but improving Watford scored twice in four minutes to condemn a below par United side to a disappointing but not unexpected defeat. 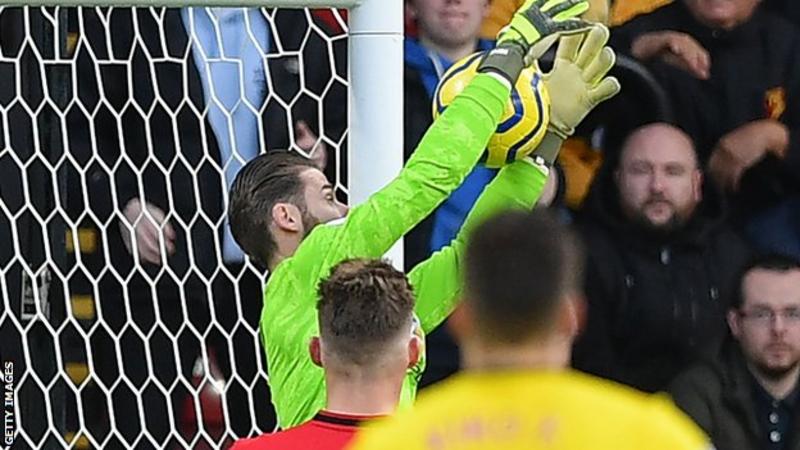 It was only the Hornets second win of the season as they remained bottom but moved to within six points of safety through goals from Ismaila Sarr and talismanic figurehead Troy Deeney.
United's season hit a further bump in the road as a side that impressively saw off Spurs and Manchester City slipped to another defeat against an opponent languishing in the league's lower echelons.

Watford were helped on their way courtesy of David de Gea's error when he allowed Sarr's mishit shot to bounce weakly through his arms, strike him in the face and find its way in.
Deeney compounded the misery for Ole Gunnar Solskjaer's side with his first league goal since April with a penalty after Aaron Wan - Bissaka had scythed down Sarr.

Not even the introduction of Paul Pogba after almost three months out proved enough to lift United, whose first shot on goal came after 70 minutes with the game lost.
Will Hughes and Etienne Capoue both went close for Nigel Pearson's new side whilst Anthony Martial flashed a shot into the side netting early on at the other end.

The hosts had a goal disallowed on 19 minutes when Craig Cathcart scored but only after he had knocked the ball out of de Gea's grasp.
Luke Shaw blocked well from Deeney before Jesse Lingard - looking to end his long wait for a league goal - lobbed the onrushing Ben Foster but his effort landed on the roof of the net.

The same pattern of play continued with United's best openings coming on the counter, but despite the Reds probing, a newly resilient and organised Watford team stood strong.

The breakthrough arrived five minutes after the interval when De Gea could only push Sarr's scuffed, mishit effort onto a post. He should have dealt with it easily but the ball dropped into the net via a post.
Scott McTominay had a headed chance shortly afterwards, but with the Reds still reeling from the goal, Watford struck again and dealt a potentially pivotal KO blow.
Up the other end, Sarr went down under AWB's challenge having burst into the area. Following a VAR check the decision stood and Deeney smashed the spot-kick down the middle to double the Watford lead.
McTominay was again denied by Foster, and Pogba made an immediate impact when he picked out Rashford, but the in-form frontman was off target.
Foster continued to defy his former side as he kept out Pogba, Rashford once more and Harry Maguire, whilst sub Mason Greenwood fired over the bar.

That proved the final action of United's last encounter before Christmas and the Reds host Steve Bruce's Newcastle on Boxing Day.

Overall team performance: 3/10
United Faithful Man of the Match: Paul Pogba. Only on for 25 minutes but did more in that time than the rest of the team.

Posted by United Faithful at 14:21