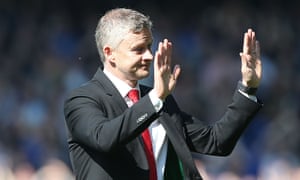 Ten months after the Easter Sunday massacre at Goodison Park, United return to Everton with an opportunity to show this side's progress since that miserable afternoon.

The 4-0 capitulation was probably former Toffees boss Marco Silva's best day in the job, but in stark contrast United's own season hit a desperate nadir in the worst performance of Ole Gunnar Solskjaer's Old Trafford tenure. There have been a few more lows since, but none quite as bad as that one. We were ripped to pieces by Everton and, although it was 4-0, in truth it could have been a lot worse. Granted, Silva's men had beaten Arsenal and Chelsea in two other big scalps in their previous two home games, but there was no logical explanation for the nature of United's collapse. Ole admitted it was his lowest point as United manager and accused his players of showing nothing and giving up.

Goodison Park has been a far from happy hunting ground for United sides in recent years - our record since the turn of the last decade in L4? Won 3, Drawn 2, Lost 5, with one of those wins coming way back in 2011.
As Solskjaer and his team return to the scene of the crime, things have changed but there's still work to do. Sunday's renewal of hostilities with the blue side of Merseyside presents United with the chance to show the progress and strides that have been made since that fateful April day in 2019.

Despite sitting fifth in the table and an unpalatable 38 points behind the unthinkables, United have made improvements since the nightmare of Goodison. The Reds go into this one on the back of our best run for more than a year, unbeaten in seven games (won five, two draws) with six clean sheers in that sequence.

United's defence - that day we had the chuckle brothers with stand-in right back Victor Lindelof and Diogo Dalot - was ruthlessly ripped apart by the pace, energy and movement of the hosts attack. The static Nemanja Matic and an out-of-his depth Fred offered nothing in midfield. All of these players are still at the club, but although things may be far from perfect at present, Solskjaer made a concerted effort to fix the side's defensive deficiencies in the summer.

Aaron Wan - Bissaka and captain-in-waiting Harry Maguire joined from Crystal Palace and Leicester respectively, for a combined fee of £130m. Expensive yes, but necessary and the two have become an integral part of Solskjaer's much improved defence. Added competition from Brandon Williams has helped to lift the level of Luke Shaw. Statistically, we've got the joint second best defensive record in Europe (17 shutouts, with Liverpool), only PSG (22 clean sheets) are superior. We boast the fourth best in the league, having conceded 29 clean sheets compared to last term's 54, although our seven clean sheets could be better.

The much malinged Fred, the epitome of all United's problems that day, has come on immeasurably, whilst alongside him Scott McTominay has become totemic before our eyes. Even Matic has done well since deputising in the injury enforced absence of the latter. Perhaps most pertinently of all, the signing of Bruno Fernandes has given the team a fulcrum, a go to match winner and a leader. He already looks at home in the red of United.
Inspired by Fernandes, we finally seem to be finding consistency but the trip to Everton is only the start of a difficult run of fixtures.

In the 4-0, Solskjaer had Marcus Rashford, Andreas Pereira and McTominay in his matchday squad  but that was only the start. He has given a plethora of youth graduates their debuts since then with Mason Greenwood and the aforementioned Williams the biggest beneficiaries. Rashford has had the best season of his young career and his injury was a massive blow for the player, the club and his manager.

A new striker should be top of the shopping list in the summer, even despite Rashford's brilliant form and Martial's creditable if inconsistent showings as the number nine. I had no problem in us getting shot of Romelu Lukaku, he wasn't good enough and wanted to leave, but we didn't replace him and that was a big mistake even if Solskjaer ultimately had no say in it. Odion Ighalo is surely only a short-term stopgap.

There's the issue of Dan James who had a lightning start but has fallen off a cliff since, and although Solskjaer has shifted a lot of the dead wood, debris still remains. Smalling, Alexis Sanchez and Marcos Rojo have left on loan whilst Ashley Young, Antonio Valencia, Lukaku and Matteo Darmian have left the club permanently. Those first three players, having correctly been deemed as not good enough, cannot return to the fold and Phil Jones also needs to be moved on. Solskjaer has done a good job in this area but recruitment still remains an issue. Clearing the deadwood and building a side with quality. Isn't that what a rebuilding project is supposed to be?

As United make the short trip to the other side of Stanley Park, this will be a tough test against a side themselves launching a challenge for Europe under Carlo Ancelotti. But for us, it's certainly a chance to show how far we've come since the dark days of the four goal massacre on this very ground 312 days ago.