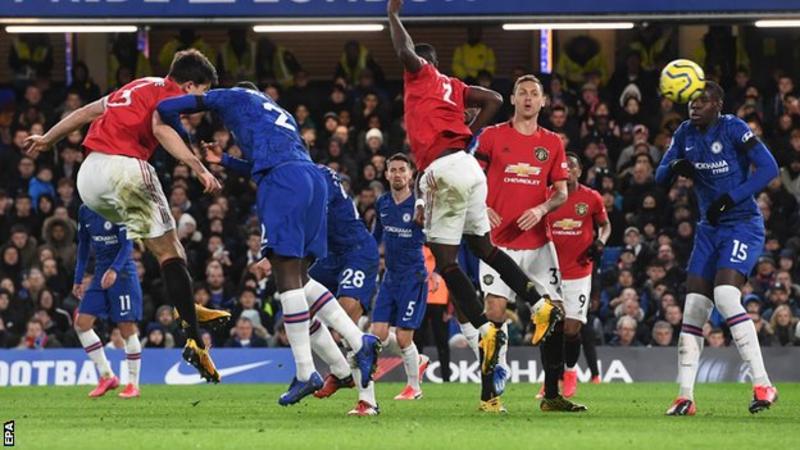 Manchester United surged back into the hunt for Champions League football with a third consecutive victory over Chelsea on a contentious night.
Anthony Martial headed Ole Gunnar Solskjaer's side in front on the stroke of half-time before captain Harry Maguire - who was perhaps fortunate not to be sent off - thumped home a trademark header in the second half.

Chelsea had two goals disallowed, both correctly, but will feel aggrieved that Maguire did not see red for a sliding lunge of Michy Batshuayi, a similar challenge that Tottenham's Heung min Son was sent off for earlier this season.
United came into the game six points and two places behind their hosts, knowing that victory was a must to stay in the last chance saloon for the top four. Manchester City's potential ban means fifth might be enough, but United can't take their eye off the ball in the congested battle at the top of the table.

This was a night when Aaron Wan - Bissaka and Harry Maguire had their best games in Red, with the former silencing the critics who say he can't attack with a wonderful cross for Martial's opener. He picked out the Frenchman with a sumptuous piece of skill and blocked, tackled and cleared everything that came his way. Maguire held the defence together, organised superbly and scored a wonderful header. He was signed to thrive on nights like this and turned in his best game in a United shirt so far.

Reece James flashed a shot wide early on, Jorginho also went close from distance and Fred had an effort deflected behind at the other end, having been teed up by Bruno Fernandes.

The game's major talking point came after 21 minutes when Maguire slid in to challenge Belgian Michy Batshuayi on the touchline. As the two tussled, Maguire's foot made contact with the striker's groin and sent him tumbling to the ground. VAR checked the incident, but deemed there was no intent and the United captain escaped censure. Chelsea were furious but replays showed there was little the sliding Maguire could do to move out the way and it seemed a natural reaction rather than any deliberate attempt at kicking out.

Batshuayi pulled a shot wide when well-placed having been picked out by early substitute Mason Mount, but Fernandes continued to pull the strings impressively for the Reds.
The Portuguese international fired narrowly off target with a 25 yarder, and then picked out Martial with a pinpoint pass that the Frenchman could only drag wide.

He fared better with his next effort though, as Fred and Wan - Bissaka linked up well and the latter made space to curl in a right wing delivery which was superbly guided beyond Willy Caballero by United's number nine.

Batshuayi fluffed his lines again as United went in a goal up.

Substitute Kurt Zouma thought he had equalised when he volleyed home from a Willian corner, only for VAR to rule out the goal for a push on Cesar Azpilicueta on Brandon Williams.

Having rattled the upright from a free-kick, Fernandes was involved again as United extended their advantage further. For the first time in what seems like an eternity, the Reds produced an accurate corner as Fernandes picked out Maguire and the skipper rose brilliantly to power home a header for his first league goal.

United were buoyant but hadn't got the game won and survived further angst six minutes further on as Chelsea's frustrations grew. The returning Eric Bailly blocked brilliantly from Mateo Kovacic before VAR intervened once more. Mount and fellow substitute Olivier Giroud combined again, with the latter heading in the former's cross. However, replays correctly showed Giroud's foot was marginally offside and the decision, again, was no goal.

Mount put a set piece into the side netting and late debutant Odion Ighalo was denied a dream goal by the outstretched leg of Caballero. Ultimatley, the goals from Martial and Maguire proved enough for an excellent victory as the Reds won again at Stamford Bridge - for the third time under Ole Gunnar Solskjaer. It was our third victory over the Blues this season and completed the club's first league double over Chelsea since 1987/88.