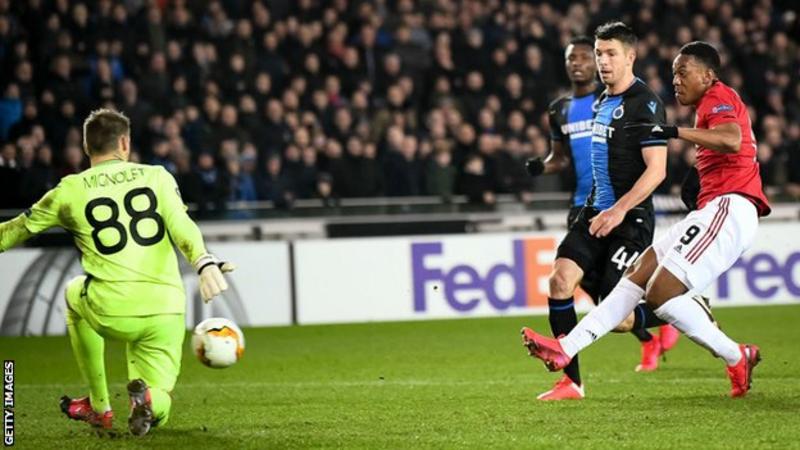 The two sides will head to Old Trafford all square, but United hold the advantage thanks to Martial's strike ahead of the return leg next week. Brugge will have to go forward and attack, and that plays right into United's hands in a side built for the press and the counter attack.

The Belgian champions-elect had dropped out of their Champions League, admittedly from a difficult section featuring PSG and Real Madrid, and faced United five years after the clubs had met in the competition.
With one eye on Sunday's important league clash against Watford, Solskjaer made six changes to the team that picked up an impressive win at Chelsea - with only Harry Maguire, Luke Shaw, Brandon Williams, Nemanja Matic and Martial keeping their places. He stuck with the three at the back system that has been increasingly frequent in recent weeks, but United struggled early on and were caught cold after 15 minutes.

Matic looked to have won a corner, but a goal kick was signalled and Brugge took full advantage. Ex Liverpool keeper Simon Mignolet thumped downfield to pick out the onrushing Dennis, and he made no mistake with a neat lobbed finish over the advancing Sergio Romero. It was a rare mistake from United's normally reliable number two, as there was no reason for Romero to come out so far off his line.

United equalised when Martial raced through to fire beyond Mignolet and grab the crucial away goal nine minutes before the interval for goal number 14 of the season and second in as many games.
The former Liverpool man saved well from the same player and Odilon Kossounou went close to a winner when he bent narrowly wide.

United's three-man defence - particularly in the first half hour - looked fragile and exposed and Solskjaer's side failed to heed an early warning when Nigerian striker Dennis burst clear but Victor Lindelof scrambled away.

Having moved ahead, Brugge almost moved 2-0 ahead with two chances in quick succession. Percy Tau flashed a shot wide and Romero atoned for his error with a smart stop from Eder Balanta.

Martial has often flattered to deceive but was United's most impressive performer here. Having equalised, he was unlucky not to put us ahead when Mignolet pushed his effort onto the post just before the interval.

Clear cut openings proved to be at a premium in the second half. Brugge talisman Hans Vanaken went close from distance, as did Nemanja Matic at the other end, but neither goalkeeper was really tested.

Kossounou somehow steered wide with the goal gaping after the impressive Dennis had picked him out, and the Nigerian then almost grabbed his and his side's second when he headed wide from a Clinton Mata cross.

Another positive for United was the late introduction of Bruno Fernandes. The Portuguese midfielder was only introduced with nine minutes left but his desire to get on the ball and his positive, forward-thinking style was yet another indicator that we have a serious player on our hands. So good was he, there's a case to be had that he was man of the match despite his brief appearance off the bench.

He set up Juan Mata with a sizzling pass, only for the Spaniard to be flagged offside, before Odion  Ighalo's acrobatic effort and Jesse Lingard's daisy cutter ensured the tie is all square at half time.

Overall team performance: 5/10
United Faithful Man of the Match: Anthony Martial. Fernandes a contender, but we can't give it to a man who played ten minutes. Martial got no service but led the line well and grabbed the crucial away goal.

50 million down the drain, Tony Martial scores again
Posted by United Faithful at 15:22