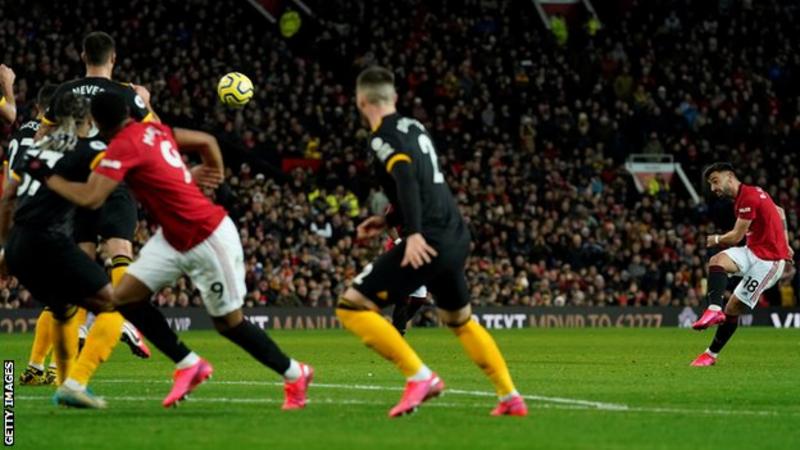 United debutant Bruno Fernandes enjoyed an impressive debut but was unable to inspire his new side to victory in another stalemate with familiar foes Wolves.

In a game of few clean cut chances, the £47m man - signed from Sporting Lisbon on Thursday - did force a few good saves from compatriot Rui Patricio, who almost inadvertently dropped another over his own goal line.

They say familiarity breeds contempt and that was certainly the case as the men from Molineux met United for the sixth time in eleven months - our third clash with Nuno Espirito Santo's side in 29 days with 2020 only a month old.
It was perhaps because of these regular tete-a-tetes that this match proved a largely dull and anodyne affair. The two sides know how each other player, they have similar styles, are very similar clubs and its always a tight contest between the combatants. The three previous encounters had ended 1-1, 0-0 and 1-0, proving that there's rarely much to separate the two well matched teams.

The nearest United came to scoring a deserved winner came in the final minute when substitute Diogo Dalot headed inches wide having been picked out by Aaron Wan - Bissaka.
Wolves worked hard and were tough to break down but, despite introducing their own new Portuguese signing Daniel Podence, also lacked a killer touch in front of goal.

While it could not be described as an explosive debut, Fernandes did enough to indicate that he will instantly offer United an improved attacking threat. Eager to get on the ball, he took risks, is quick, looked creative and sparky, took the initiative at set pieces and was not afraid to shoot.

Typically, Fernandes had the first effort of the encounter when he flashed a shot narrowly wide on the angle, and then fired a 20-yarder straight at Patricio.  He wasn't afraid to get stuck in either, with a crunching challenge on countryman Joao Moutinho, which earned him a booking.

Another free-kick and the routine strike Patricio made a mess of were his second half highlights, but he won't be able to raise the level of this team on his own.

The visitors had chances too, with Raul Jimenez denied by David de Gea and Roman Saiss heading over when he should have better eleven minutes from time.

Podence had a shot blocked on the turn and Ruben Neves tried his luck from distance but Wolves, playing their 41st game of the season, ran out of steam.

Fernandes was not the only man restricted to only long range efforts as Harry Maguire flashed a shot over the ball and Andreas Pereira was unable to call Patricio into action.
Juan Mata pulled a shot inches wide on the turn and the visiting keeper then frantically had to shovel another Fernandes around the post.

Mason Greenwood - on as a sub for the ineffective Andreas - almost grabbed a potential winner six minutes after his introduction when his drive deflected off Willy Boly and Conor Coady but Patricio was able to snatch the ball low down.

Sub Dalot then came even closer with the final action of the game when his stooping header rolled agonisingly wide ensuring another stalemate.

So the match, the fourth of the season between the clubs, ended all square and goalless.

Overall team performance: 7/10
United Faithful Man of the Match: Bruno Fernandes. A superb debut even if he did understandably tire late on