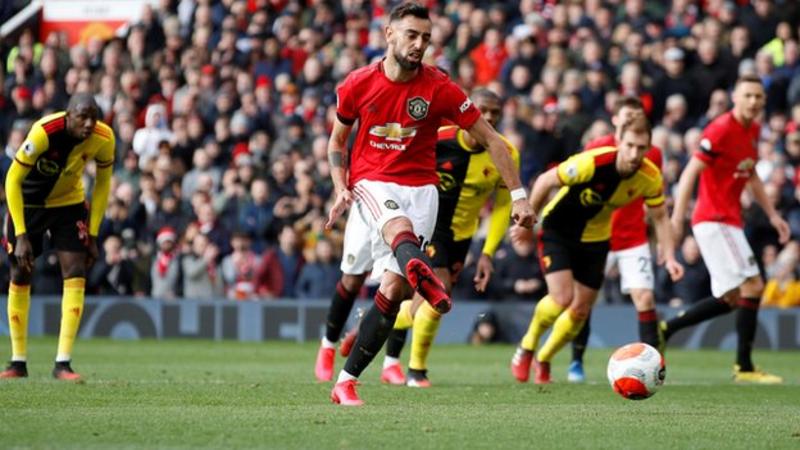 The influence of United's 47m signing is growing by the week as he scored his first goal for us and also chipped in with two assists and a man of the match performance.

Fernandes got off the mark with a penalty - becoming the first United player to score his first goal for the club in such a manner.
Anthony Martial's filthy second from Bruno's ball and Mason Greenwood's brilliantly-taken third - again from a Fernandes pass - wrapped the game up and earned Ole Gunnar Solskjaer's men coveted, much needed back to back league wins.

It was not all plain sailing though, and what would a Premier League game be these days without VAR intervention. At 1-0, Troy Deeney thought he had equalised when he bundled in under pressure from Harry Maguire. The video assistant referee, however, ruled that the ball had struck Watford defender Craig Dawson on his arm as the ball rebounded off a post in the build up.
It look accidental and harsh but the correct decision under the new handball laws.

Given what was to come, it was a shaky start by the Reds against Nigel Pearson's struggling but improving Watford. The Hertfordshire Hornets had proved what a tough nut to crack they can be when they beat us 2-0 in December, and looked full of fight and intensity from the off here.
They were almost gifted an opener inside five minutes when Maguire and Nemanja Matic ran into each other as they attempted to mop up danger. Instead, they created a self inflicted fate and Deeney seemed poised to score for the second time against United. However, the Watford skipper's touch was heavy and Luke Shaw preserved parity with a superb lunging challenge.

David de Gea saved well from the lively and powerful Abdoulaye Doucoure and Daniel James then went close at the other end in a much improved showing from United's former Swansea man.
Fred flashed a shot wide after James teed him up but the breakthrough was not in coming, with DJ again involved.
He collected the ball on halfway, burst past two Watford defenders and picked out the onrushing Fernandes. United's new boy was scythed down by former Red Ben Foster and took responsibility for the kick himself. He opened his account and broke the deadlock with the cheekiest of penalty finishes three minutes before half time.

Then came the Watford 'equaliser' on 52 minutes but the technology did its job to deny the Hornets a vital foothold in their battle against the drop. From then on, their threat faded and United took full control.

String puller in chief Fernandes was involved again two minutes shy of the interval as he sent Martial clear in the 58th minute. Foster appeared to have snuffed out the Frenchman's chance of a goal, only for the striker to recover possession, spin and brilliantly lift the ball audaciously over the stranded Foster and in.

Maguire headed wide from another Fernandes cross and Mason Greenwood was denied by Foster, but you can't keep the 18 year old quiet and out of the action for long.
If the first two goals had been impudent, then the third was pure ferocity and power. Greenwood started and finished the move as he found, you guessed it, Fernandes. The Portuguese gave him it back and Greenwood, as is his wont, went for power and thumped the ball in off the underside of the bar for his eleventh goal of a breakthrough season.

Watford's talented talisman Gerard Deulofeu struck the bar with De Gea beaten, and Solskjaer then made three changes in quick succession including the introduction of former Hornet Odion Ighalo.

Ighalo, still working up to full fitness, was denied a dream Old Trafford debut against his old club when - after beating Foster - his angled effort was blocked at the near post by the stretching Adam Masina.
Fellow sub Tahith Chong went close to a fourth but there was no further action as United moved above Spurs and Sheffield United to return to fifth, three points behind closest rivals Chelsea.

Overall team performance: 7/10
United Faithful Man of the Match: Bruno Fernandes. Scored one, set up the other two and ran the show. Magnificent.