Oh what a night! Manchester United sealed a momentous derby double with a nerve shredding victory over Pep Guardiola's subdued, soon to be deposed champions. 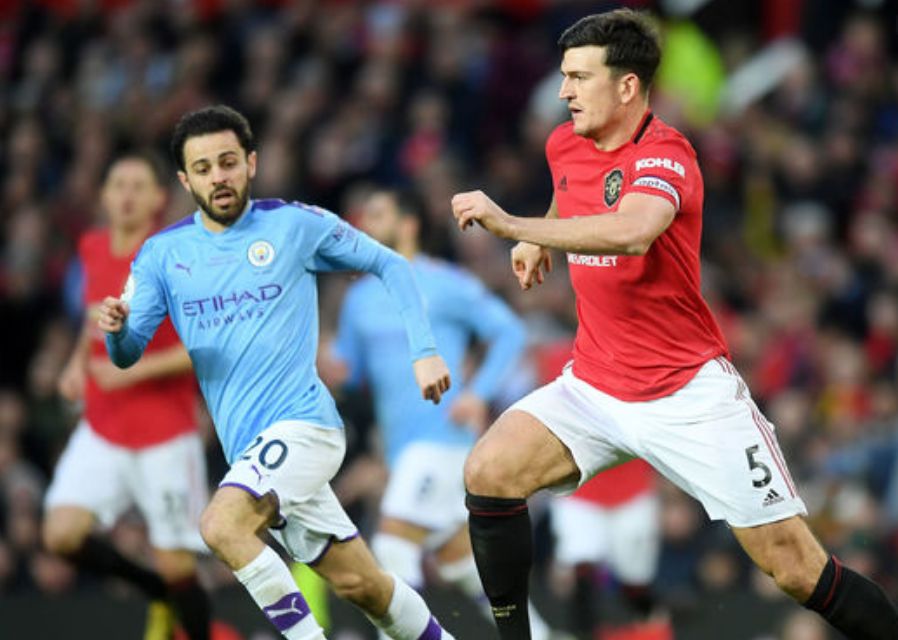 Ole Gunnar Solskjaer's side were clinging to the slenderest of leads after Anthony Martial's first half goal, when Old Trafford erupted as Scott McTominay seized on Ederson's errant throw out to steer the ball into the empty Stretford End net. It completed a hat-trick of wins over City and a huge, monumental victory that ensured United kept pace with Chelsea who won 4-0 against Everton earlier on Sunday.

Spirit, guts, willpower, resilience, courage and character - a team performance in every sense of the word.

For all of City's possession and territory, De Gea actually had little to do as the men in front of him did a simply magnificent job. Made a good save from Sterling early on and another from Phil Foden, but everything he had to do he did well. It was a day of contrasting fortunes for two of the league's best keepers. Ederson had a rare nightmare. A more comfortable than expected day at the office.

Imperious and solid alongside Maguire, Lindelof read the game superbly and shut down his area of the pitch. He and Maguire seemed to win everything in the air between them and never allowed a strangely subdued City a sniff. City passed their way down blind alleys and the Iceman - despite looking the weak link when the team was announced - was a big part of that. I'd have preferred to see Eric Bailly start instead but Lindelof more than justified his selection.

I very rarely give players a ten, but Maguire was simply colossal in the wave of a City siege. Got nutmegged once by Aguero, but the man City could have signed won everything, made tackles, organised the defence and epitomised his side's performance. He seemed telepathic at times, drawn to every ball as if by magic. The captain rendered one of the best strikers in the world anonymous. A rock. Maguire was immense, magnificent, huge. My captain and man of the match no doubt. How City wished they could have signed him

Got beaten a few time by the pace of Bernardo Silva but, stationed again on the left of a back three, Shaw dealt with everything that came his way. He has improved beyond all recognition and Solskjaer must take the credit for that. Such was City's frustrations, Pep Guardiola switched Silva with Sterling to try and open him up and then put Riyad Mahrez on him, but Shaw would not budge. Followed up his mightily impressive form with another excellent showing. Top class. He epitomised the team's resilience and courage.

Wan - Bissaka resumed his personal duel with Sterling and again came out on top. AWB harried and battered the City star into submission and pushed him to the fringes. A bundle of power, pace and strength, the guy never misses a tackle. He broke up attacks and bombed forward at will. Sterling must be sick of the sight of him. He just couldn't get past him, no matter what Sterling tried. Another huge individual performance. Immense again. A contender for United's player of the season.

Very harshly booked in the first half for a dive that replays showed should have been a penalty. Admitted aided by the absence of key City man Kevin de Bruyne, who he would have been in direct opposition with, Fred was just as good as he was at the Etihad back in December. Superb both in defensive and attacking situations, he won everything, linked the play, his passing was superb and he seemed to be omnipotent. A man bang in form, he has epitomised United's resurgence and is finally getting the credit he deserves.

I would have picked Scott McTominay ahead of him, but credit where it's due to the in-form Serbian. Matic was excellent again as a shield in front of United's back three and, far from being over-run, he actually got the better of Ilkay Gundogan. It's a stunning transformation for a player who looked certain to leave last summer. Matic has been nothing short of magnificent since coming into the team, he'll never be our most skilful or most important player but he did his job well in a Rolls Royce performance.

A mixed day for the Manchester-born alumni in his first Old Trafford league derby. He played a part in the first goal and dovetailed nicely between defence and attack. Didn't shy away from his task even though he was given a tough time by Mahrez when he came on with City desperate for a way back. Solid if not always spectacular, Williams kept his head in the firepit and made some key interceptions. Tried to get forward but got taken off as United shut down the game.

Quiet by his standards but got a filthy assist for Martial's opener. Showed ingenuity and intelligence for the goal, went close from a couple of set pieces and was pushed up front as United clung grimly to their lead. A constant threat, Fernandes is the glue that holds this side together and at one point started an attack from the edge of his own 18 yard box. The brain, heart and lungs of this side - imagine where we'd be if we signed him in January. He demands excellence from those around him and is the ultimate leader.

Ran himself into the ground, I can't fault DJ's effort and work rate. But his decision making and final ball definitely need improvement. There was an occasion when he opted for goal and Ederson saved with Fernandes and Martial free in the box in space. It's still bugging me now but fortunately it didn't cost us. He ripped City to shreds back in the first meeting of the season in December, and had his moments this time around. His form has improved of late.

Another typical performance from the languid, mercurial Frenchman. Ederson should have saved his shot that led to the first goal, as he became the first United player since CR7 in 2006/07 to score home and away against City in the same season. Had the hapless Nicolas Otamendi on toast all day and led the line superbly. A constant threat. Now has 16 for the season, one short of his best ever scoring season for the Reds. Showed awareness and a predatory instinct for the goal. He never stopped running and was pivotal to the counter attacking game plan. Excellent. Got subbed to a standing ovation late on.

Unlucky not to start, Bailly wasn't on long but did his bit as United attempted to shore things up and see out the game. Won a few headers and made two good clearances.

Like Bailly, was only on for the final moments but played his part and scored the match winning goal in stoppage time. A 35 yarder over Ederson sparked the most buoyant scenes OT has seen for years. He knows what this fixture means and added energy and guile to the midfield at a time when United needed it. Helped the Reds to wrestle back an element of control and gave us another man to lock down the midfield.

One sumptuous back heel to set up a late attack and helped us to get out but wasn't on long enough to rate. His first taste of a Manchester derby

Has now beaten the so called "best manager in the world" three times this season with another tactically perfect performance. Set United up to defend from the front, we were superbly organised and Ole deserves immense credit for putting together a ten match unbeaten run. Long may it continue.

Posted by United Faithful at 08:42