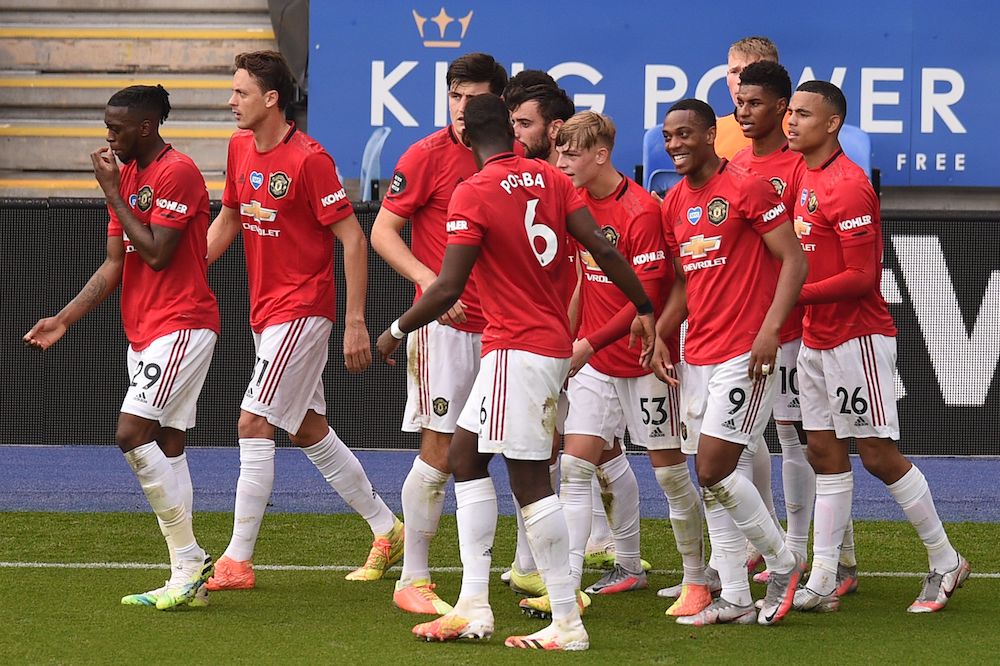 Manchester United will play in next season's Champions League after a tense but decisive victory at top four rivals Leicester.
Ole Gunnar Solskjaer's side won 2-0 at the King Power through goals from Bruno Fernandes and Jesse Lingard to seal third place at the expense of Brendan Rodgers badly faltering Foxes.

Here, we run the rule over those in Red after our 38th and final Premier League game of a protracted 2019-20 campaign.

Relatively untroubled and made one good save from Harvey Barnes in the second half with the game on a knife edge. That said, the Spaniard still provided a couple of heart-in-mouth moments, not least when he spilt an Albrighton effort only to be bailed out by the offside flag.

Another tired showing from a player who has been a revelation this season. Made some good interceptions as usual and saw plenty of the ball, but must improve his forward runs and distribution. Did little wrong defensively.

Booked early on in a slow start that epitomised United's nervousness. Going back to his former side, Maguire improved as the game wore on and kept Vardy quiet. It's been a mixed season for the Reds skipper, but ultimately its one that has ended with him leading the side to a top three finish.

The best of the back four, this was a huge performance from the Iceman. Looked assured playing out from the back, won everything in the air, used the ball well and never looked troubled by Vardy. Lindelof saved his best performance until last, in what was his best showing of the season. Immense.

Most positive of the two full-backs, he saw a lot of the ball and used it well. In his toughest examination of the season, Williams did his job well and caught the eye with his industry. Controlled aggression at the back, Williams has looked rash recently but did well here.

The stereotypical game of two halves for United's hit and miss Serbian. A passenger in the first half, he looked ragged against the Leicester press and was careless in possession, often losing the ball in dangerous areas. Matic improved in the second half, though, and carved the Foxes open with some lovely passes

Dominant and controlled in midfield, and by far United's most creative player in the first half. Involved indirectly in both goals and Pogba looked the most likely to make something happen. Made amends after his rush of the blood to the head in midweek. That minor aberration aside, the Frenchman has made a huge difference to United since the restart.

A game in which United's brightest young star drifted in and out of. He made some good runs and created a few openings, but he was looked after well by the Leicester defence. Played a part in the opener when he won the ball high up the pitch and played in Martial for the penalty, also going close with a header. Next season will be a big one for the 18-year-old.

A very uncharacteristic showing from Bruno Fernandes in another weary performance. Had a goal disallowed, but yet despite being below par he still made a difference by scoring from the spot - a goal of huge consequence for United. The last few weeks has not seen the best of him, but there can be no doubt the impact he has made.

Played far too deep, taking up the role of playmaker rather than finisher. Had two good chances in the first half and was involved in the Lingard goal when he won possession. Forced a good save from Schmeichel but a contender for United's player of the season struggled to make an impact.

Brightest of the front three and looked a threat every time United went forward. Made the decisive dart forward to earn United's penalty and had two good chances in the first half. Another decent performance from the Frenchman, who ends the league season with 17 goals.

On what could be his final farewell in the Red of United, Lingard buzzed around and capitalised on a rare Schmeichel error to score. Did his job.

Did little but helped to wind the clock down by keeping the ball ticking over. Subject of the late lunge that saw Evans sent off. McTominay will probably play in the Europa League.

Came on too late and neither got a touch. No rating

Job done. Got the result he needed and steered United to third place. Deserves huge credit for doing so having come from nowhere since the turn of the year. Team selection was good, United look re-energised and a third place finish is a huge improvement on last season.