On a night that saw Manchester United turn in their finest performance of the season, it was always going to take something special to stand out individually. Step forward, Donny van de Beek.

van de Beek completed 90 minutes for the first time in the red of United and showed what we've been missing with a stunning all-round showing. Although Bruno Fernandes grabbed the headlines and the man of the match award, the Dutchman impressed with his silky touch, link up play and intelligent running, breaking the lines effortlessly and always being at the heart of everything we did. This was van de Beek's third successive Champions League start and he's had EFL Cup game time, but he's only been restricted to a smattering of brief cameo appearances as a substitute in the Premier League. 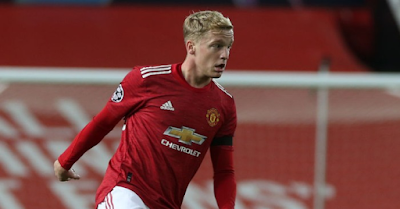 Every time I've seen him, he's always a contender for man of the match, he makes us tick and looks the part. Performances such as this one make his continued absence from the league games all the more baffling. Away from the Fernandes half-volley, the tap-in and the late Dan James goal, was the thoughtful, intelligent, mature and composed performance of the quietly effective Dutchman. He was secure and industrious on the ball, a rare panacea in the turbulent times that have befallen and befuddled the United midfield in recent times.

Put in a deeper role alongside Fred, van de Beek controlled the game and linked well with the likes of Fernandes to see United put in a clinical and incisive attacking performance. He was not directly involved in any of the four goals but played a part in  James clincher, as he sent Mason Greenwood clear to square for the young Welshman to tap in. So often, United struggle to break through against lesser, more lowly opponents and lack both the patience and guile to break them down and move the ball quickly. van de Beek has both in abundance and has surely played himself into the starting line up with this showing. After Fred and Nemanja Matic came Fernandes and van de Beek. From the stifling to the stylish. United hammered the Turkish side for the best part of an hour. Only when Ole Solskjaer shuffled his pack to give breathers and keep men fresh did feet come firmly off pedals.

He is something of an anti-English anathema in that van de Beek can fit in anywhere in the midfield, he's versatile, can do a multitude of jobs and is equally as comfortable wherever he plays. For a player fed on the Ajax diet of "Total Football", that should come as no surprise, but it's perhaps at odds to the archetypal English indentikit. For a United side that already has two of the best no.10s in Europe, van de Beek was never going to straight in. There's a British dislike of versatility and the mercurial "utility man" - we want players who can improve a team in a certain position and woe betide anyone whom moves them out of where they are supposed to be. Seemingly, if you can play in three, four or even five different positions, you are of no use.

Solskjaer simply has to find a way to get van de Beek into the team every week from now on. You feel he doesn't trust the centre-halves enough to deploy Fernandes and van de Beek together and so instead relies on the double pivot of Fred and either Scott McTominay or Matic to shield and protect Harry Maguire and Victor Lindelof's lack of pace. But van de Beek is too good to ignore, and you don't need two CDMs against a West Brom or a Fulham. United traditionally struggle to break down opponents that sit deep and in a low block, denying time and space and flooding the midfield and defence. If Fernandes is marked out of a game, we have another string-pulling creator to turn to. Late on when Fernandes was subbed and van de Beek moved further forward into the 10, he played a defence-splitting pass for the fourth and almost set up a fifth for Greenwood. 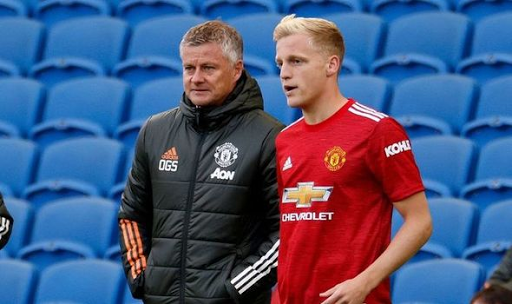 When picking a full-strength Manchester United side, van de Beek simply has to be in it. The likes of Paul Pogba may be better in terms of pure pound-for-pound ability, but he does a better job than the frustrating Frenchman and offers us more.

If Solskjaer wasn't fully convinced by the talents of the young Oranje, then his mind surely must have been changed by now. The focus now shifts to the weekend, Southampton away, and if United can follow up a great European performance with a similar one in the Premier League.

Whether we can or not could well hinge on the presence of a certain Dutchman at the heart of the engine room. Van de Beek has played his way into contention and proved he's worthy of a place. He cannot continue to be held back.