Bruno Fernandes inspired Manchester United to victory as the Reds responded to back-to-back losses and eased the pressure on manager Ole Gunnar Solskjaer.

United's Portuguese magnifico scored twice and set up the other to give the Reds a first victory at Goodison Park in three years and record a seventh successive away win. After losses to Arsenal and Istanbul had cast fresh doubt on Solskjaer's suitability for the job, this will come as a welcome tonic to the Norwegian as, once again, he pulled out a result just when he needed one. 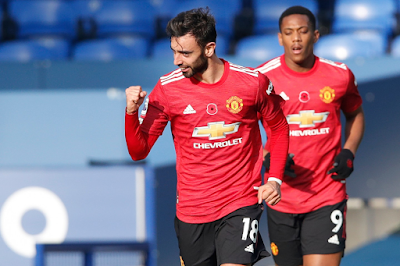 United had fallen behind through Bernard but Carlo Ancelotti's side subsided to a third consecutive loss as the Toffees, top of the table after four games, dropped to sixth. United climbed to thirteenth, five points off fourth-placed Leicester with a game in hand.
Solskjaer ditched the diamond formation with two changes from defeat to Arsenal in the league last time out as Juan Mata and Anthony Martial were restored to the XI in place of Nemanja Matic and the ill Mason Greenwood. Martial came in to lead the line having completed his domestic suspension in a familiar 4-2-3-1 system.

Even with no fan present, Goodison Park always presents a difficult challenge and United looked set for another tough day at the office as Everton, revitalised under the legendary tutelage of the veteran Italian, started strongly. United had the first chance of the game though, as Martial flashed a shot narrowly wide having been picked out by his strike partner Marcus Rashford.

The in-form Dominic Calvert - Lewin had already fired a warning but the Reds failed to heed that let off a the hosts took the lead after 19 minutes. Having been lambasted for the shoddy and shambolic nature of Istanbul's two goals in midweek, Solskjaer and his side could have done without another.
Calvert - Lewin was inevitably involved as the returning Jordan Pickford thumped the ball downfield and the Toffees leading scorer flicked it on. Victor Lindelof failed to clear and the ball dropped to Bernard who fired through the legs of Aaron Wan - Bissaka and into the corner beyond David de Gea. It was a good finish from the Brazilian, but Wan - Bissaka should have got tighter and the winger was allowed to get his shot off too easily.

To United's credit though, they responded superbly to the setback and had equalised within six minutes. Luke Shaw found Fernandes with a superb cross at the culmination of a 20-pass United move, and the Portuguese playmaker thumped his header beyond Pickford for his fifth goal of the season in the 25th minute.

Lucas Digne skimmed the crossbar with a drive from distance, but the Reds went ahead with their next attack, turning a deficit into a lead in the space of 13 minutes. Again it was a neat move as United showed slick passing and movement to create the chance and then finish it, albeit slightly fortuitously.
Wan - Bissaka found the immense Fred, and the lung-busting Brazilian in turn moved the ball on to Rashford. Rashford turned it left to Fernandes and his lofted cross-shot, possibly meant for the onrushing England man, dropped into the net via a post. 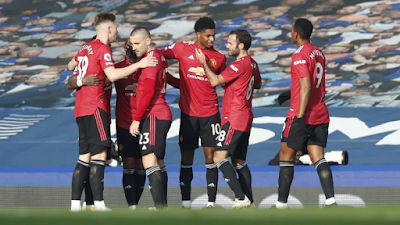 Ancelotti hadn't lost three successive ties since his days in charge of Real Madrid in 2014, and sent out his side out to preserve that stat after the break.
There was little in the way of clear cut chances but plenty of commitment, with Fernandes booked for a crunching tackle on Digne. Pickford was then fortunate to escape censure as he lost the ball under pressure and seemed to scythe down Harry Maguire with a kick out, but VAR deemed the clash a legitimate one.

United's skipper was immense in his best performance for many a month, clearing his lines with several towering headers as the Toffees launched an aerial bombardment. He thwarted Calvert - Lewin with a stunning challenge and then blocked from James Rodriguez as the hosts started to lift their level.

Despite maintaining an element of control, there was always a sense that the Reds would need a third goal, and Rashford almost provided it on 72 minutes. Fred, dictating the play and setting the tempo, released Rashford with a lovely reverse clipped pass. It left Rashford one on on one with Pickford, but he merely blasted the ball straight at his England colleague and the much-maligned Everton keeper saved the effort with his legs.

Mata went close as he tested Pickford from distance, but the threat remained intermittent at the other end as Maguire cleared impressively under pressure from substitute Alex Iwobi. Seamus Coleman found Abdoulaye Doucoure, but the rangy midfielder couldn't keep the shot down to trouble De Gea and perhaps should have done better.

For all their probing, crosses and flurry of corners, though, Everton never really threatened the keeper and United sealed the deal deep into stoppage time. With the hosts pushed up and everyone forward in search of a leveller, the Reds broke in vintage style as Maguire stabbed the ball out to Fernandes. The Portuguese was unstinting in his desire to carry the ball deep into Everton territory, and this time turned provider as he teed up substitute Edinson Cavani to slide beyond Pickford for his goal in the red of United.

Overall team performance: 8/10
United Faithful Man of the Match: Bruno Fernandes. There were several superb individual performances - Fred, Scott McTominay and Maguire to name but three - but United wouldn't have won the game without the influence of Fernandes.