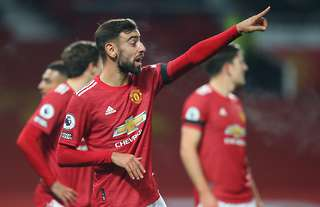 A retaken Bruno Fernandes penalty gave United their first home league win of the season over Slaven Bilic's battling Baggies.
After Darnell Furlong's handball, former Reds keeper Sam Johnstone saved the Portuguese's initial effort, only for VAR to correctly deem he'd come off his line. Fernandes made no mistake on the second attempt as he slammed the re-taken spot-kick high beyond Johnstone, despite the keeper again having erred in his duties.

West Brom had earlier had a penalty of their own awarded when Conor Gallagher went down under a challenge from Fernandes, only for the video technology to show the United man had got a foot on the ball before clipping the Albion attacker. Referee David Coote overturned the decision, only compounding Bilic's sense of injustice.

The result lifted United above Arsenal and Pep Guardiola's Manchester City and into ninth place in the table after our first back-to-back wins of the season. Newly promoted West Brom, victorious on three of their last five visits to M16, remain winless and firmly amongst the favourites for an immediate return to the second tier.

Returning to action after a two week hiatus, Ole Gunnar Solskjaer made two changes from the side that won at Everton before the international break. Alex Telles was handed his league debut at left-back in place of the injured Luke Shaw, and Nemanja Matic replaced Scott McTominay at the base of the midfield.

Anthony Martial headed narrowly wide inside the opening five minutes, after Juan Mata had picked him out with an excellent cross. The mercurial Frenchman went close again ten minutes later, when he was denied by Johnstone after a sweeping move.
The former United keeper was in inspired form throughout, adding to the list of ex-Red stoppers to become prime Manuel Neuer when up against his former employers.
But David de Gea was kept busy too, and was forced into action soon afterwards when he tipped Karlan Grant's low effort wide with a superb fingertip save.

Johnstone did well under pressure from Martial after the ball had deflected to him, and Kyle Bartley then felt the full force of Harry Maguire, as the United captain thumped a volley straight in to the kisser of the Albion skipper.
But the West Brom captain is clearly made of stern stuff and went close himself three minutes before half-time when he met Conor Townsend's cross to loop a header over the bar.

Then, in the 48th minute, came the main talking point. Gallagher tumbled under a challenge from Fernandes and Mr Coote showed no hesitation in pointing to the spot. Martial had a similar challenge on him go unnoticed in the first half, so perhaps justice prevailed when replays showed Fernandes had crucially got a foot on the ball in the process of clipping Gallagher. 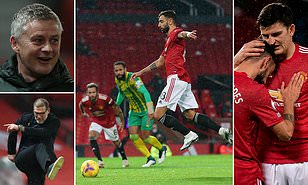 But there would be further drama to come at the other end. De Gea denied Townsend through a stonking save with his foot, before United had a penalty of their own. There could be no argument with this one, when Mata's cross struck the outstretched arm of the backpedalling Furlong.

Fernandes saw his spot-kick saved by Johnstone only for the ex-Red to step off his line and Fernandes slammed home his second penalty. Johnstone had come off his line for that one, too, so there would have been a third re-take had Fernandes missed.

To his credit, Johnstone kept United at bay with a string of simply stunning saves. Having kept out Fred and Martial, he palmed away a Maguire header and then thwarted Marcus Rashford from close range.
West Brom substitute Callum Robinson hit the bar with a curler, before Johnstone continued his heroics with a firm low save to deny another replacement, United's Edinson Cavani.

Fernandes had another effort beaten out, with the uncomfortable nature of a slender lead entirely down to Johnstone's heroics. In truth, the Reds could - and should - have won by a much wider margin, but will take a win any which way it may come.
A 1-0 lead in the closing stages of any game is always nervy, even against obdurate and resilient opponents scrapping for every point. West Brom never looked like hitting United with a late sucker punch, though, and United held out for valuable back-to-back victories.

Posted by United Faithful at 03:59