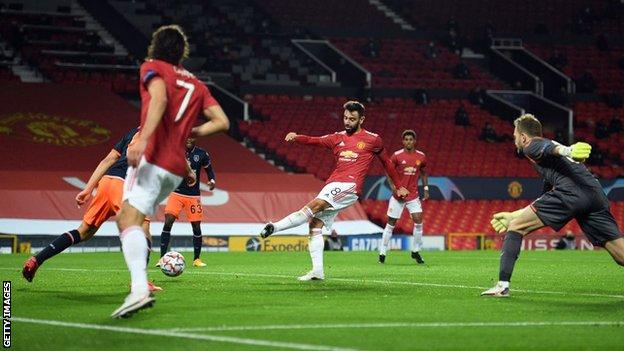 A Bruno-Fernandes inspired Manchester United moved to the cusp of qualification with another impressive Champions League victory.
The Reds avenged their defeat in the Turkish capital last time out and require only a point from one of their last two games to confirm a place in the last 16 of the competition.

The game was effectively over the interval as a stunning Bruno Fernandes half-volley, and a close range finish after a goalkeeper error, was added to by a Marcus Rashford penalty in the opening half hour.
Deniz Turuc gave Ole Gunnar Solskjaer's side a minor scare in the second half, but a Dan James goal, his first at Old Trafford since August 2019, completed the rout and put United in pole position.
Having lost in ignominious fashion last time out, Solskjaer was faced with a must win game and made two changes from the West Brom win, with Donny van de Beek in for Nemanja Matic and a first start for Edinson Cavani, ahead of Juan Mata. In a very attacking line up, Marcus Rashford and Anthony Martial started as wingers with Cavani up top ahead of Fernandes and van de Beek slightly deeper alongside Fred. Rafael da Silva, a United cult hero and fan favourite, returned to Old Trafford and featured at right-back for the visitors.

United made the perfect start as they seized control from the outset and went ahead after only six minutes. Istanbul failed to clear an Alex Telles corner and the ball dropped to Fernandes, who crashed home a half-volley from 25 yards into the tip bins for another memorable and metronomic moment from the incomparable Portuguese.

Rashford had the ball in the net after a defence-splitting pass from Fernandes, only to be flagged offside, and the magnifico was involved again after 19 minutes as United moved 2-0 ahead. Mert Gunok should have claimed comfortably from a Telles cross, but credit must go to Cavani. His movement put the keeper under pressure and the Uruguayan veteran got a touch on the ball, forcing the keeper into a mistake as he fumbled into the path of Fernandes, presented with the easiest goal of his career.

Rashford was denied by a good save from Gunok and Martial flashed into the side netting, before United put the game beyond doubt by the half-hour mark. A superb raking pass from Victor Lindelof set Rashford free and the United man was scythed down by Boli Bolingoli. Replays showed Rashford was onside, with a penalty awarded. Fernandes, despite being on a hat-trick, handed the spot-kick to our no.10 and he made no mistake to roll the effort into the corner for his eighth goal of the season.

To their credit, the Turks - despite being out of contention both in the match and the group - made the Reds work hard for their win after the interval.
David de Gea saved well from Edin Visca and former Spurs man Nacer Chadli - one of four ex-Premier League players in the visitors ranks - went close from distance. United made a flurry of changes and that, combined with the comfortable nature of our lead, led to a spell of pressure from Okan Buruk's side.
Irfan Kahveci headed over before the Turks were handed a potential lifeline and a glimmer of hope 15 minutes from the end.
De Gea looked to have kept out a well-hit set piece from Turuc, but could only claw the ball from behind the line as the referee's watch buzzed and he awarded the goal. Visca hit the bar with a curler but United, helped by the calming influence of Nemanja Matic, weathered the storm.

James grabbed the fourth goal in the final minute as he linked with fellow sub Mason Greenwood to seal another four-goal haul. Cavani flicked on to Greenwood and the teenager burst clear to pick out the onrushing James and he placed the ball under the advancing Gunok in the final minute to end his goal drought.

PSG beat Leipzig 1-0 in the other game in this group to move into second place and set up a humdinger at Old Trafford next week.