Edinson Cavani climbed off the bench to inspire Manchester United to an incredible turnaround on the south coast and fire Ole Gunnar Solskjaer's side to a fourth successive win.
Southampton had taken control through a Jan Bednarek header and a trademark James Ward - Prowse free-kick before the veteran Uruguayan - on at the interval - turned the tide as he set up Bruno Fernandes, then headed the equaliser before he flicked home the winner from a Marcus Rashford cross in the second minute of stoppage time.

The result lifted the in-form Reds up to fifth in the table after a fourth successive win and an eighth consecutive victory on the road, the first time in club history United have achieved such a feat. 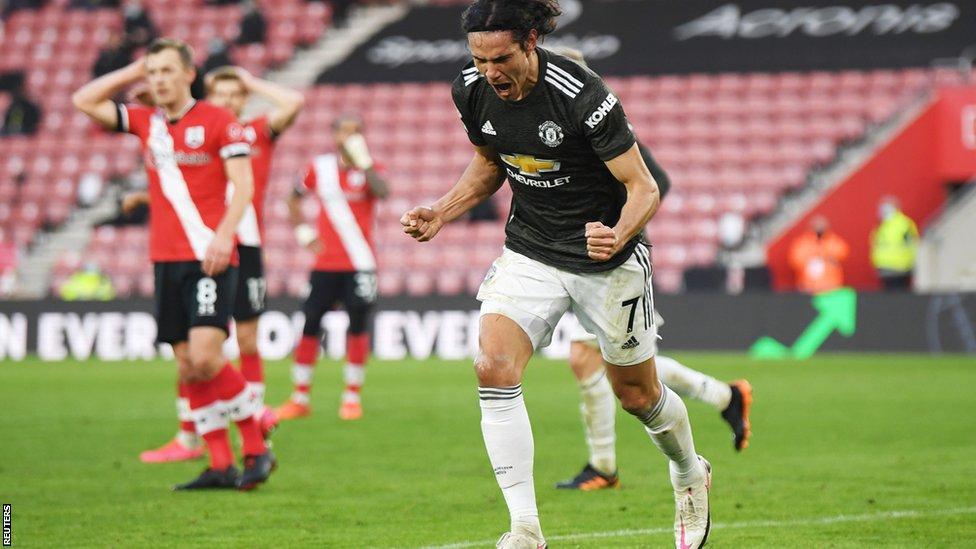 Solskjaer made two changes from the side that beat Istanbul in midweek, with Mason Greenwood and Nemanja Matic coming in for the ill Anthony Martial and Cavani, moved to the bench after his 90 minute outing in midweek.
Donny van de Beek was handed a first league start, and was at the heart of things straight away inside ten minutes.
Neat link play between the Dutchman and Alex Telles at left-back saw the former find the latter and he, in turn, moved the ball on to Greenwood. The young striker burst clear but could only find the side netting with his effort.
Fernandes clipped the outside of a post and then headed wide but despite having created - and squandered - numerous openings - United fell behind on 23 minutes against the run of play. After a dangerous Ward - Prowse free-kick (is there ever any other kind) had been cleared, the Saints skipper swung in the resultant corner and Bednarek rose to power home his header from close range.

Kyle Walker - Peters flashed a drive wide before United went close twice in quick succession at the other end. Alex McCarthy's miskicked clearance was seized upon by Greenwood, only for the Saints keeper to make amends with a fine low save. The rebound fell to Fernandes but McCarthy was equal to that, too, blocking from the Portuguese when it looked easier to score.

Having carved out most of the chances, United were punished for their profligacy just beyond the half hour mark after Fred had scythed down Moussa Djenepo. Ward - Prowse, who models his game on the great David Beckham, stepped up and curled the set-piece majestically over the wall and in from 20 yards, although David de Gea should have done better.

Harry Maguire thwarted Che Adams and Greenwood headed over at the other end in the final moments of the first half.

Solskjaer made a double change at the interval as Dean Henderson replaced the injured De Gea, who appeared to bang his knee against the post as he attempted to save the Ward - Prowse effort.
The United keeper came on for his league debut for the Reds and Cavani was also thrown on in place of the almost anonymous Greenwood. 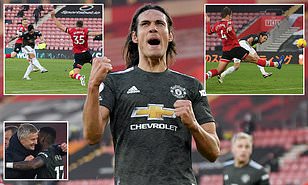 Henderson's first Premier League save as a Red came on 48 minutes as he was tested by Theo Walcott from distance. Rashford fired straight at McCarthy, although he looked to be offside, and Cavani then went close when his shot on the turn deflected over the bar after Rashford had picked him out.

The tide was turning as United's pressure paid off as the Reds two most dangerous players combined to drag the team back into the game. Fred won the ball combatively and found Aaron Wan - Bissaka, whom in turn moved the ball on to Cavani. He picked out Fernandes and the Portuguese moved into double figures for the season as he took a touch and rolled the ball beyond the despairing McCarthy.

Cavani was on a one-made crusade to get his side off the canvas and almost levelled moments later when he met another Wan - Bissaka delivery only to nod the ball narrowly over the bar. His mission had only just started, though, and on 74 minutes Cavani wasn't to be denied. A Telles corner fell to Fernandes and his cross was met by the flying Uruguayan with a superb diving header beyond McCarthy to restore parity.

Adams went close to putting Saints ahead again but United laid siege to the Southampton goal in search of a trademark late winner. McCarthy saved from Rashford and Fernandes shot wide, whilst Fred was narrowly off target from distance as the clock ticked down.
Cavani headed over and van de Beek was kept out by the busy McCarthy, but the Reds perseverance paid off and a memorable comeback was complete in the second minute of added-on time.

Rashford's cross found Cavani and the veteran striker did the rest to spark wild celebrations on the pitch and on the touchline as Solskjaer - who knows a thing or two about substitute impacts and late winners - raced from his seat to embrace his coaching staff.

Had there been fans in the away end, you can only imagine the scenes in there as Cavani wheeled away to celebrate a win that propels United into the top half and puts us firmly in touch with the chasing pack.

The Reds will be a mere two points off the top should we win our game in hand against struggling Burnley.