Manchester United are through to the FA Cup fifth round after knocking out Liverpool in a superb cup tie at Old Trafford.
After a sterile stalemate in the league at Anfield last week, these two old rivals served up a classic for the ages as Ole Gunnar Solskjaer's United prevailed in a five-goal thriller to set up a last 16 tie with West Ham.

It was Solskjaer's first win over Jurgen Klopp in another notable scalp for the Reds manager. Here, we look at who starred and who struggled at Old Trafford.

Powerless to prevent the opener but perhaps could have done better for Salah's second as the ball went underneath him. Cleared his lines well and made two good saves from Trent Alexander - Arnold and the hat-trick hunting Egyptian, the latter at 2-2 and with Liverpool getting on top, A save that was crucial in eventual victory. Did his job.

Liverpool got no change down his flank and that was down to the solidity and resilience of Wan - Bissaka. Linked up well with Paul Pogba and got forward well, bursting forward to support the attack and got a couple of good crosses in. His passing was a little negligible at times. AWB would benefit from some competition at right-back.

Just doesn't look as commanding or as comfortable as he does alongside Eric Bailly. At fault for the second goal when he got caught in possession trying to pass out. Struggled to keep tabs on the forwards but there were some good clearances and some key blocks. Didn't do much wrong but not fantastic either.

Not particularly good but not particularly bad either. Hardly put a foot wrong at Anfield but got caught out of position for Salah's opener. Struggled against the movement and guile of Roberto Firmino and lost the ball quite easily on occasions. At fault for the first goal. Doesn't look confident and remains a worry.

Luke Shaw - 9
Perhaps a bit of a surprise starter, but the best player on the pitch again by a considerable distance. He is playing at a phenomenal level right now. Possibly partly responsible for Salah's opener but it's fair to say he redeemed himself with a stunning performance as he linked with Rashford, overlapped and stormed forward at will. Defensively good, magnificent going forward and added an end product with a series of testing crosses. Deserves an England recall. Never stopped running and outshone his more illustrious full-back compatriots.

Caught in possession more than once but grew into the game and looked better when Fred came on. Shielded the centre-backs well and his work rate was key in tracking the runners and recycling the ball. Had a couple of decent openings but played in a deeper role than normal and got found wanting.

Quiet by recent standards but showed flashes of form and put a shift in. A slightly different job here in a spoiling role rather than all-action attack. Played a part in our equaliser as he won the ball that started the move to culminate in Greenwood's leveller. Diligent and disciplined, this was another quietly effective showing - but the BBC's decision to give him man of the match seemed an odd one.

Scored for the first time in ten games with a trademark run, touch and finish inside the box. A strike he badly needed and looked back to his best at times. Got an assist, too, albeit a fortuitous one as Rhys Williams should have dealt with Greenwood's ball in behind. Unlucky to be taken off at 2-2 and with United in need of a goal, but looked a threat on the break even if he did drift in and out of the tie at times.

Awarded a rare start but did nothing to justify the outcry over his lack of game time. Slowed the game down, looked rusty and was always on the periphery despite his role in the first goal. Too safe on the ball,  and you struggle to see what he offers. Had a few bright moments but faded to the fringes and was hooked shortly after the hour. A disappointing day.

Looked far more comfortable stationed in his more favoured position on the left. Terrorised Liverpool all day with a stunning pass for Greenwood's opener and a thumping, wonderfully composed finish for the second. Caused Trent Alexander - Arnold no end of problems with his pace and direct running. Back to his best. Looked to have picked up a knock in the second half. Excellent. 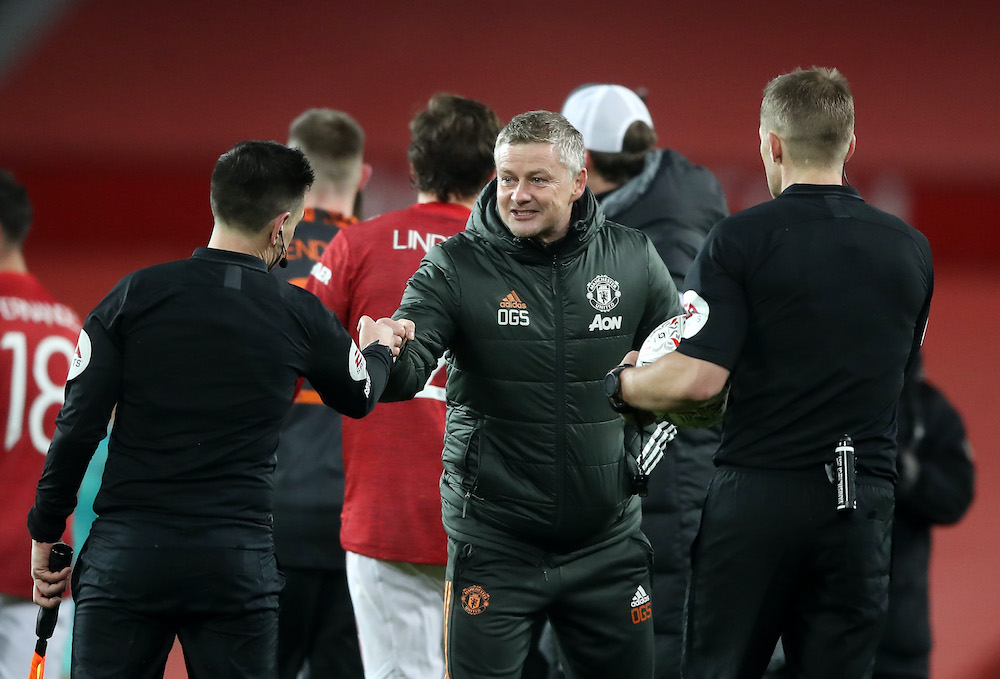 Although he was generally starved of service and didn't get involved in the penalty box too much, the veteran Uruguayan provides a focal point and a presence that the other strikers simply don't, or can't. Struck the post with a late header and ran himself into the ground with an immense work rate. Showed his importance despite not getting on the scoresheet. Still awaiting his first Old Trafford goal but used his experience to earn the free-kick for the winner when Fabinho scythed him down.

Combative, energetic and helped United wrest control of the midfield at a time when Liverpool were coming on strong. United's attacking impetus was notably stronger and improved when the little Brazilian came on. Sadio Mane should have perhaps been sent off for his reckless lunge on him, but it was a good call from Solskjaer despite the need for a goal. Must be a pain in the backside to play against.

Given a much-needed rest as he started the game on the bench, he wasn't on the pitch for long but his impact grows ever more seminal. Often criticised for not showing up in the biggest of the games, that wasn't the case here with a majestic free-kick to decide the tie. A sensational late cross for Cavani should have given him an assist. The spark, the fire-starter, the talismanic figurehead. What a player. Curled home the free-kick like a penalty.

No rating. Came on to hold the ball up and to get United out. Not on long enough