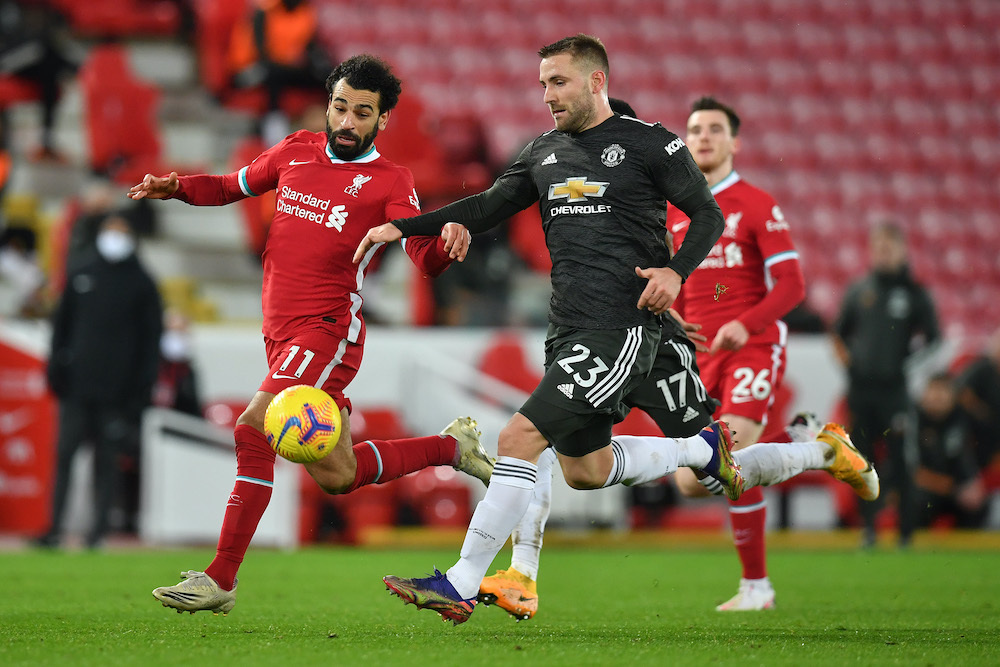 Manchester United remained top of the Premier League after a goalless draw at Anfield in the 205th competitive meeting between the sides. Ole Gunnar Solskjaer's side will be content with a point but will also feel one point could have been three.
Here, we run the rule over those in Red (or, more accurately, gray), as we retained both our leadership of the league and our points advantage over the out-of-form champions.

You would expect a very busy afternoon for an opposing goalkeeper at Anfield, but this curiously wasn't the case with most of the Spaniard's work coming from long-range pot shots and clearing his lines. Had Roberto Firmino not left his shooting boots at home, De Gea would have been troubled more but, as it was, he had very little to do. Made one good stop to deny Thiago from distance in the second half.

Shackled Sadio Mane with trademark tenacity and had a few moments going forward. Perhaps could have conceded a penalty in a clash with Salah late on, but dealt with Mane and Robertson - probably the best left flank in the country - with diligence. Typically solid, nothing flashy but good in the tackle and, as usual, excellent when one-on-one.

Surprisingly and somewhat contentiously picked ahead of the recently excellent Eric Bailly, Lindelof justified his selection with a magnificent showing. Seemed drawn to the ball like a magnet, and made a sensational, colossal, match-saving clearance with ten minutes to go and Roberto Firmino set to pounce. The thought of his and Maguire's lack of pace against two of the quickest forwards in the league terrified me, but fair play to Solskjaer for getting this selection right. Fair play to the Iceman too for an excellent performance.

A few shaky moments and lost the ball needlessly once or twice, but good in the air, organised well and generally solid. If you're a centre-back and you get a clean sheet at Anfield, you will always get a good rating. Having been superb alongside Bailly in recent weeks, Lindelof coming back in did not hinder Maguire at all. In fact, this was one of the best games the two have had together in a pair at the back.

A sensational, virtuoso masterclass and the best player on the pitch by a considerable distance. Shut down Mo Salah and later Mane magnificently and linked the play brilliantly to create our two best chances with overlapping runs. This was probably Shaw's best ever game in the Red of United. Magnificent in defence and attack, he was absolutely flawless. Cleared everything, never missed a tackle, made six interceptions and never stopped running. A dominant and decisive man of the match showing. A player in the finest of fettles and shone like a beacon amidst a galaxy of stars.

Over-run and outmuscled by Thiago in early stages as his opposite number dictated the play and set the tempo. Could McTominay perhaps have done better to shut down the Spaniard? Maybe, but to his credit he grew into the game and himself started to pull the strings as United's midfield held their own. Dropped into the back four when out of possession and had a couple of surging runs forward. The ultimate big-game player, his importance is evident for Ole Gunnar Solskjaer.

Solid if unspectacular, Fred looked a little flustered at times under Liverpool's high press. This was a middling performance - nothing amazing but nothing awful. His usual consistent self, combative and put a shift in. Never gives anything less than his all, he was tireless and his composure improved as the game went on. Very similar in style to his cohort McTominay, the pair are perfect partners against top class sides.

Stationed wide on the right, this was a bits and pieces performance from the Pog. Having put in a man of the match showing at Burnley in midweek, Pogba looks noticeably happier, working hard for the team and putting a shift in despite his unfamiliar position. Covered for Wan - Bissaka and opened Liverpool up with some good passing. Smashed straight at Alisson in our best opening. Anonymous at times, influential at others.

Billed as United's most important player and touted as the key to Anfield victory, Fernandes was disappointing. On his first appearance against Liverpool, he often tried too hard and snatched at anything meaningful. His contributions ranged from the profligate to the sloppy via the over-ambitious. Went close with a free-kick and did get involved in the game, but should have done better with his late effort from a Shaw pull-back. Reacted petulantly after getting subbed to sum up his worst game for a while. 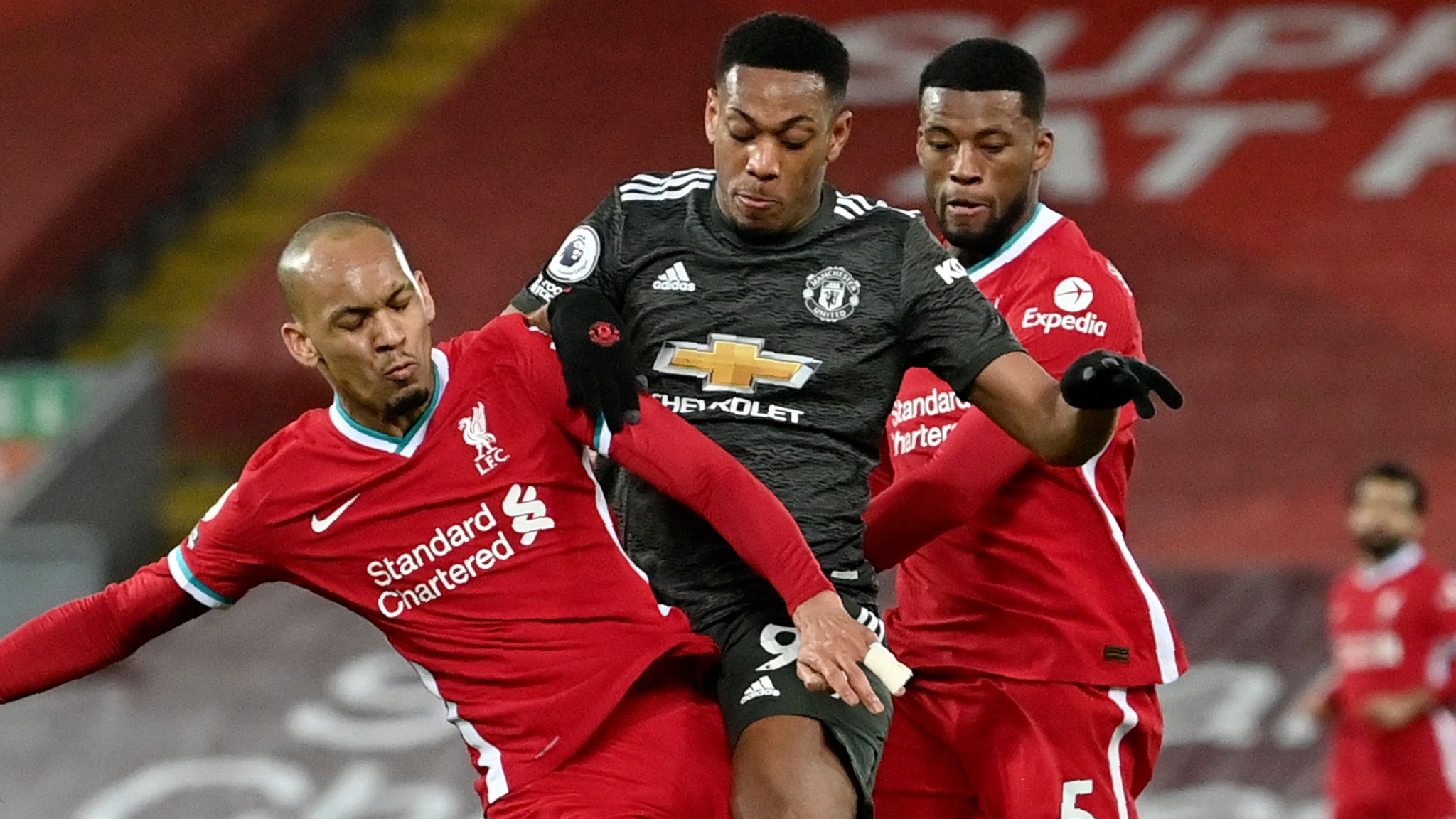 Showed naivety, indiscipline and a baffling lack of understanding with the offside flag, getting caught out four times before the interval. Devoid of quality and influence, he failed to play in Cavani when three on two, his shooting was wasteful and he was anonymous. Played as the furthest man forward before Cavani came on, but failed to make the most of it. Had a shocker.

Ineffective from the left, Martial did nothing to suggest he should be our starting no.9. An injury doubt coming into the tie, this was a tepid and anonymous showing. There was one fleeting first half moment when he burst clear and threw in a nutmeg, but failed to build on that and was hooked for Cavani after an hour. Failed to fire and didn't do enough to test Liverpool's makeshift centre-halves.

Showed some nice touches and offered something different as a focal point of the attack. But United never quite managed to get him in the game and he often dropped deep to collect the ball.

Came on for a fuming Fernandes late on. No rating.

Posted by United Faithful at 08:59